Mark Steyn: They wait for us to run again 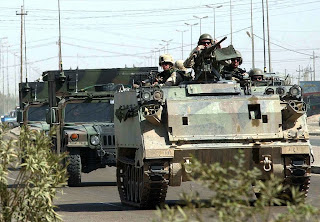 
George W. Bush gave a speech about Iraq last week, and in the middle of it he did something long overdue: He attempted to appropriate the left's most treasured all-purpose historical analogy. Indeed, Vietnam is so ubiquitous in the fulminations of politicians, academics and pundits that we could really use anti-trust legislation to protect us from shopworn historical precedents. But, in the absence thereof, the president has determined that we might at least learn the real "lessons of Vietnam."

"Then as now, people argued the real problem was America's presence and that if we would just withdraw, the killing would end," Bush told the Veterans of Foreign Wars convention Aug. 22. "Many argued that if we pulled out there would be no consequences for the Vietnamese people … . A columnist for the New York Times wrote in a similar vein in 1975, just as Cambodia and Vietnam were falling to the communists: 'It's difficult to imagine,' he said, 'how their lives could be anything but better with the Americans gone.' A headline on that story, dateline Phnom Penh, summed up the argument: 'Indochina Without Americans: For Most a Better Life.' The world would learn just how costly these misimpressions would be."

I don't know about "the world," but apparently a big chunk of America still believes in these "misimpressions." As the New York Times put it, "In urging Americans to stay the course in Iraq, Mr. Bush is challenging the historical memory that the pullout from Vietnam had few negative repercussions for the United States and its allies."

Well, it had a "few negative repercussions" for America's allies in South Vietnam, who were promptly overrun by the North. And it had a "negative repercussion" for former Cambodian Prime Minister Sirik Matak, to whom the U.S. ambassador sportingly offered asylum. "I cannot, alas, leave in such a cowardly fashion," Matak told him. "I never believed for a moment that you would have this sentiment of abandoning a people which has chosen liberty … . I have committed this mistake of believing in you, the Americans." So Sirik Matak stayed in Phnom Penh and a month later was killed by the Khmer Rouge, along with about 2 million other people. If it's hard for individual names to linger in the New York Times' "historical memory," you'd think the general mound of corpses would resonate.

But perhaps these distant people of exotic hue are not what the panjandrums of the New York Times regard as real "allies." In the wake of Vietnam, the communists gobbled up real estate all over the map, and ever closer to America's back yard. In Grenada, Maurice Bishop toppled Prime Minister Sir Eric Gairy: It was the first-ever coup in the British West Indies, and in a faintly surreal touch led to Queen Elizabeth presiding over a People's Revolutionary Government. There were Cuban "advisers" all over Grenada, just as there were Cuban troops all over Africa.

Because what was lost in Vietnam was not just a war but American credibility.

Do the British qualify as real "allies" to the Times? The Argentine seizure of the Falkland Islands occurred because Gen. Galtieri had figured if the commies were getting away with all this land-grabbing, why shouldn't he get a piece of the action? After all, if the supposed Yank superpower had no stomach to resist routine provocations from its sworn enemy, the toothless British lion certainly wouldn't muster the will for some no-account islands in the South Atlantic.

"The West" as a whole was infected by America's loss of credibility. Thanks to Mrs. Thatcher, Galtieri lost his gamble, but it must have looked a surer thing in the spring of 1982, in the wake of Vietnam, and Soviet expansionism, and the humiliation of Jimmy Carter's botched rescue mission in Iran – the helicopters in the desert, and the ayatollahs poking and prodding the corpses of American servicemen on TV.

American victory in the Cold War looks inevitable in hindsight. It didn't seem that way in the Seventies. And, as Iran reminds us, the enduring legacy of the retreat from Vietnam was the emboldening of other enemies. The forces loosed in the Middle East bedevil to this day, in Iran, and in Lebanon, which Syria invaded shortly after the fall of Saigon and after its dictator had sneeringly told Henry Kissinger, "You've betrayed Vietnam. Someday you're going to sell out Taiwan. And we're going to be around when you get tired of Israel."

President Assad understood something that too many Americans didn't. Then as now, the anti-war debate is conducted as if it's only about the place you're fighting in: Vietnam is a quagmire, Iraq is a quagmire, so get out of the quagmire. Wrong. The "Vietnam war" was about Vietnam, if you had the misfortune to live in Saigon.

But if you lived in Damascus and Moscow and Havana, the Vietnam war was about America: American credibility, American purpose, American will. For our enemies today, it still is. Osama bin Laden made a bet – that, notwithstanding the T-shirt slogan, "These Colors Do Run": They ran from Vietnam, and they ran from the helicopters in the desert, and from Lebanon and Somalia – and they will run from Iraq and Afghanistan, because that is the nature of a soft, plump ersatz-superpower that coils up in the fetal position if you prick its toe. Even Republicans like Sen. John Warner seem peculiarly anxious to confirm the bin Laden characterization.

Depending on which Americans you ask, "Vietnam" can mean entirely different things. To the New York Times and the people it goes to dinner parties with, it had "few negative repercussions."

And it's hardly surprising its journalists should think like that when Times publisher Pinch Sulzberger, in a commencement address last year that's almost a parody of parochial boomer narcissism, was still bragging and preening about his generation's role in ending the war. Joseph Nye, dean of the Kennedy School of Government at Harvard (which is apparently some sort of elite institution for which people pay big money to receive instruction from authoritative scholars such as professor Nye), told NPR last week: "After we got out of Vietnam, the people who took over were the North Vietnamese. And that was a government which preserved order" – if by "preserved order," you mean "drove a vast human tide to take to the oceans on small rickety rafts and flee for their lives."

But, if you're not a self-absorbed poseur like Sulzberger, "Vietnam" is not a "tragedy" but a betrayal. The final image of the drama – the U.S. helicopters lifting off from the Embassy roof with desperate locals clinging to the undercarriage – is an image not just of defeat but of the shabby sell-outs necessary to accomplish it.

At least in Indochina, those who got it so horribly wrong – the Kerrys and Fondas and all the rest – could claim they had no idea of what would follow.

To do it all over again in the full knowledge of what followed would turn an aberration into a pattern of behavior. And as the Sirik Mataks of Baghdad face the choice between staying and dying or exile and embittered evenings in the new Iraqi émigré restaurants of London and Los Angeles, who will be America's allies in the years ahead?

Professor Bernard Lewis' dictum would be self-evident: "America is harmless as an enemy and treacherous as a friend."
Posted by jtf at 6:10 PM