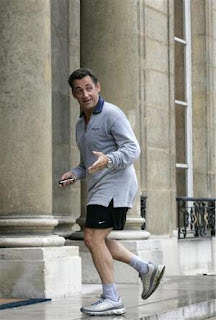 Some French theorists believe that President Nicolas Sarkozy's jogging is unprogressive becuase it promotes "individualism" and a "cult of performance".

PARIS -- "We," the finance minister says, "have a terrible past." She also says: "In a way, we've had it too easy." Christine Lagarde is correct on both counts.

Her first "we" refers to Europe; the second, to France. Both Europe's cataclysms and France's comforts condition the context for reforms.

Lagarde, 51, has a more informed affection for America than anyone who has ever risen so high in this country's government. She was an exchange student at a Washington prep school and a Capitol Hill intern during the Nixon impeachment proceedings. As a partner in a large law firm based in Chicago, for several years she lived in, and loved, the most American city.

Today, her challenge is defined by this fact: France's welfare state, which has enabled many to have it "too easy," is incompatible with the welfare of the state, and of society. The government, preoccupied with propitiating dependent groups that it wants to proliferate, is big but weak. And the welfare state weakens its clients. "The ethic of work," Lagarde says, "has vanished."

Recently she threw the intelligentsia into a tizzy by saying: "France is a country that thinks. ... Enough thinking, already. Roll up your sleeves." Proving her point, intellectuals here theorize about why President Nicolas Sarkozy's jogging is unprogressive: It involves "individualism," "the cult of performance" and "management of the body," whereas walking is "sensitive." Rolling up one's sleeves is, however, almost illegal because of the statutory 35-hour workweek. Lagarde's response to this "stupid" (her word) law is "a law in favor of work," one implementing a slogan that helped Sarkozy get elected in May: "Working more to earn more." What a concept.

Lagarde has undertaken to subvert the 35-hour restriction, which has been enforced by government agents snooping in companies' parking lots for evidence of antisocial industriousness. Overtime work will be exempt from taxes and social insurance charges. For this, she has been abused in parliament by socialists -- their invectives are as stale as their doctrines -- who compare her to Marie Antoinette.

Why not just repeal the law? Because, Lagarde says, the left considers this "an accrued right." Think about that -- a right to be forbidden the right to chose to do something elemental (work). French intellectuals are adept at thinking themselves into such tangles. "They," Lagarde says, "want to bring people down to solidarity." And "they regard work as alienation in the old Marxist understanding."

France's problems actually derive less from a 19th-century German than from a 17th-century Frenchman. Lagarde works in an office complex with portions named for Jean Monnet and Robert Schuman, two 20th-century French pioneers of Europe's path to a single market. But another portion is named for Jean-Baptiste Colbert (1619-83). On behalf of Louis XIV, Colbert practiced mercantilism, using subsidies, tariffs, price controls and other regulations to manage the economy. The French tradition of dirigisme -- pervasive state intervention in the economy and society -- lives.

Two years ago Le Figaro newspaper inveighed against "the American ogre" Pepsi, which was interested in buying Danone, the yogurt and bottled water (Evian) company. Practicing "patriotisme economique," Sarkozy, then a Cabinet minister, urged mobilization of Danone shareholders to block the sale.

Such "patriotism" aggravates France's social sclerosis, and is inimical to Europe's project for burying its "terrible past." In 1951, war-weary Europe, groping toward transcendence of nationality and hence the furies of nationalism, created the European Coal and Steel Community, an attempt to weaken control by nations of two primary commodities for their war machineries. This was the tentative first step toward today's European Union, which limits -- although not nearly enough -- the ways states can intervene in markets.

These limitations serve Lagarde's project of prying the fingers of politics off vast swaths of the economy. She favors slashing inheritance taxes and preventing any person from paying more than 40 percent of income in total taxation. One index of her success would be decreased emigration by young college graduates, driven abroad by the fact that French unemployment has not been below 8 percent in 25 years. Since, that is, 1982, when President Francois Mitterrand, a socialist, was keeping his 1981 campaign promise to "break with the logic of profitability."

Another French citizen with deep understanding of America warned about France's "regulating, restrictive administration which seeks to anticipate everything, take charge of everything, always knowing better than those it administers what is in their interests." So wrote Alexis de Tocqueville 150 years ago, defining France's problem and Lagarde's challenge.

georgewill@washpost.com
Posted by jtf at 11:36 AM

Email ThisBlogThis!Share to TwitterShare to FacebookShare to Pinterest
Labels: Economics, Europe, George Will