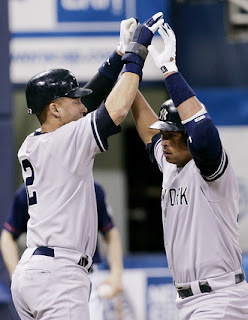 MINNEAPOLIS, April 10 — The Minnesota Twins could have reached into their past and cloned Walter Johnson, and it probably would have made no difference. Alex Rodriguez is especially hot right now, seeming to bludgeon any pitcher in his path.

Andy Pettitte took the Metrodome mound Tuesday night with a two-run lead thanks to Rodriguez. If Pettitte were pitching against him, he admitted, he would duck the challenge. “I’d probably tell my catcher to put four fingers up and go after the next guy,” Pettitte said.

Rodriguez had never faced Boof Bonser before Tuesday, but it took just six pitches to figure him out. Rodriguez blasted a high changeup into the left-field seats for a two-run homer, propelling the Yankees to a 10-1 victory behind six shutout innings from Pettitte.

Last season, it took 28 games for Rodriguez to hit six home runs. He is already there now, with a season-opening flurry that just one player has ever exceeded.

“You don’t want to miss any of his at-bats right now,” catcher Jorge Posada said. “That’s how good he is.”

The way Rodriguez is swinging, it hardly seems fair that Wednesday’s opposing starter is Ramón Ortiz. In 48 career at-bats against Ortiz, Rodriguez has a .333 average and eight home runs.

“Just trying to see the ball and hit it,” Rodriguez said. “Keeping it simple.”

Rodriguez spoke mostly in platitudes, smiling when an agitated Mike Mussina joked that his locker stall was crowded with reporters waiting for Rodriguez.

“Come on!” Mussina wailed. “Six home runs in seven games? He’s supposed to do that, just ask you guys!”

When talking about himself, Rodriguez had little to say. He was more comfortable talking about Pettitte, whose victory was the first of his second tour with the Yankees and the 150th of his Yankees career.

“It’s awesome playing behind Andy,” Rodriguez said. “He’s such a competitor. He’s so focused and intense, and he’s a perfectionist.” 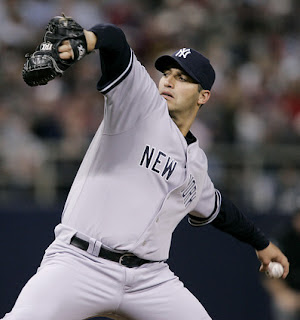 Andy Pettitte winds up against the Minnesota Twins in the second inning.

Pettitte’s victory followed a seven-inning effort by Carl Pavano on Monday. Pettitte allowed four hits and a walk, striking out three. Twice the Twins put a runner in scoring position with no outs, and both times Pettitte escaped the inning.

Though he said his legs felt tired, the result of a layoff late in spring training because of back spasms, Pettitte was pleased with how aggressive he was against the Twins. He also worked better with Posada than he had in his first start, when he lasted only four innings in a game the Yankees lost to Tampa Bay.

“We had a good game plan,” Posada said. “The main thing was just throwing everything for strikes, expanding the zone away and not using the cutter until we needed to. We really worked it out.”

Rodriguez started last season with a grand slam on opening day, but over the next 10 games he had just two extra-base hits and one run batted in. Rodriguez drove in 16 runs last April; he has 15 already this month.

He came up in the first inning Tuesday with Derek Jeter on first and two outs. The count ran full when Bonser got Rodriguez to chase a low changeup. But the next changeup came in belt high and over the middle, an invitation for Rodriguez to pounce.

He did, smashing the ball over the wall in left-center. At that point, Rodriguez had 31 total bases in 26 at-bats, including six home runs. Even when he flied out to right field in his next at-bat, Manager Joe Torre said, the players on the bench thought the ball was gone.

“The way he’s swinging, all he has to do is make contact to hit the ball hard,” Jeter said. “It’s one of those waves you hope you can ride for a long time.”

The Twins walked Rodriguez intentionally his third time up. By then, the Yankees had widened their lead to 6-0, helped by Melky Cabrera, who would go 3 for 4 to shake a 2-for-21 slump.

Another rout was on, and Rodriguez had started it all, picking up where he had finished in Monday’s 8-2 victory, when he homered in his last at-bat.

The hitting coach Kevin Long said Rodriguez was keeping his leg kick under control and staying short and compact in his swing.

From an aesthetic standpoint, Rodriguez has hiked up his pant legs to just below the knees, showing off solid navy blue socks every game. He has done it before, for a game or so at a time, but now it is part of his ensemble.

“We were on a back field in the middle of spring training, just being goofy,” Rodriguez said. “I was with my buddy Pepe, from Miami, and I just put them up. He said, ‘You look like a Notre Dame football player,’ and I just stuck with them after that.”

Whatever Rodriguez is doing, for whatever reasons, it is working.
Posted by jtf at 11:00 AM