Richard S. Lindzen: Why So Gloomy? 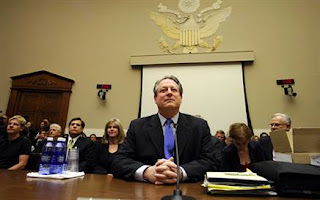 • This Way Forward
• What It Means for the Economy
• Beyond British Petroleum
• Q&A: Our Fear Is Getting In the Way
• The Costa del Norte
• Untold Harvest
• An African Revolution
• Vineyards On the Move
• Who Will Win, and Who Will Lose
• Hot On the Pole
• Follow the Butterflies
• Mosquito Trajectory
• Wars For Water?
• Cities of Virtue
• Schwarzenegger's Crusade
• Picture Change
• There’s No Such Thing As a 'Perfect' Temperature
• Q&A: Gary Yohe on Vulnerable Nations
• Q&A: Why I’m Investing in Climate Science
• The Call for Draconian Cuts
• The Race to Make Fuel From Sugar
• How 100 Countries Will Adapt to Climate Change
• The Global 100 Greenest CompaniesMULTIMEDIA
• Winners and Losers: Interactive Map
• Photo Gallery: Heating Up
• Test Your Knowledge of Global Warming
• Calculate Your Carbon Footprint


By Richard S. Lindzen
Newsweek International
April 16, 2007 issue - Judging from the media in recent months, the debate over global warming is now over. There has been a net warming of the earth over the last century and a half, and our greenhouse gas emissions are contributing at some level. Both of these statements are almost certainly true. What of it? Recently many people have said that the earth is facing a crisis requiring urgent action. This statement has nothing to do with science. There is no compelling evidence that the warming trend we've seen will amount to anything close to catastrophe. What most commentators—and many scientists—seem to miss is that the only thing we can say with certainly about climate is that it changes. The earth is always warming or cooling by as much as a few tenths of a degree a year; periods of constant average temperatures are rare. Looking back on the earth's climate history, it's apparent that there's no such thing as an optimal temperature—a climate at which everything is just right. The current alarm rests on the false assumption not only that we live in a perfect world, temperaturewise, but also that our warming forecasts for the year 2040 are somehow more reliable than the weatherman's forecast for next week.

A warmer climate could prove to be more beneficial than the one we have now. Much of the alarm over climate change is based on ignorance of what is normal for weather and climate. There is no evidence, for instance, that extreme weather events are increasing in any systematic way, according to scientists at the U.S. National Hurricane Center, the World Meteorological Organization and the Intergovernmental Panel on Climate Change (which released the second part of this year's report earlier this month). Indeed, meteorological theory holds that, outside the tropics, weather in a warming world should be less variable, which might be a good thing.
In many other respects, the ill effects of warming are overblown. Sea levels, for example, have been increasing since the end of the last ice age. When you look at recent centuries in perspective, ignoring short-term fluctuations, the rate of sea-level rise has been relatively uniform (less than a couple of millimeters a year). There's even some evidence that the rate was higher in the first half of the twentieth century than in the second half. Overall, the risk of sea-level rise from global warming is less at almost any given location than that from other causes, such as tectonic motions of the earth's surface.
Many of the most alarming studies rely on long-range predictions using inherently untrustworthy climate models, similar to those that cannot accurately forecast the weather a week from now. Interpretations of these studies rarely consider that the impact of carbon on temperature goes down—not up—the more carbon accumulates in the atmosphere. Even if emissions were the sole cause of the recent temperature rise—a dubious proposition—future increases wouldn't be as steep as the climb in emissions.
Indeed, one overlooked mystery is why temperatures are not already higher. Various models predict that a doubling of CO2 in the atmosphere will raise the world's average temperature by as little as 1.5 degrees Celsius or as much as 4.5 degrees. The important thing about doubled CO2 (or any other greenhouse gas) is its "forcing"—its contribution to warming. At present, the greenhouse forcing is already about three-quarters of what one would get from a doubling of CO2. But average temperatures rose only about 0.6 degrees since the beginning of the industrial era, and the change hasn't been uniform—warming has largely occurred during the periods from 1919 to 1940 and from 1976 to 1998, with cooling in between. Researchers have been unable to explain this discrepancy.
Modelers claim to have simulated the warming and cooling that occurred before 1976 by choosing among various guesses as to what effect poorly observed volcanoes and unmeasured output from the sun have had. These factors, they claim, don't explain the warming of about 0.4 degrees C between 1976 and 1998. Climate modelers assume the cause must be greenhouse-gas emissions because they have no other explanation. This is a poor substitute for evidence, and simulation hardly constitutes explanation. Ten years ago climate modelers also couldn't account for the warming that occurred from about 1050 to 1300. They tried to expunge the medieval warm period from the observational record—an effort that is now generally discredited. The models have also severely underestimated short-term variability El Niño and the Intraseasonal Oscillation. Such phenomena illustrate the ability of the complex and turbulent climate system to vary significantly with no external cause whatever, and to do so over many years, even centuries.
Is there any point in pretending that CO2 increases will be catastrophic? Or could they be modest and on balance beneficial? India has warmed during the second half of the 20th century, and agricultural output has increased greatly. Infectious diseases like malaria are a matter not so much of temperature as poverty and public-health policies (like eliminating DDT). Exposure to cold is generally found to be both more dangerous and less comfortable.
Moreover, actions taken thus far to reduce emissions have already had negative consequences without improving our ability to adapt to climate change. An emphasis on ethanol, for instance, has led to angry protests against corn-price increases in Mexico, and forest clearing and habitat destruction in Southeast Asia. Carbon caps are likely to lead to increased prices, as well as corruption associated with permit trading. (Enron was a leading lobbyist for Kyoto because it had hoped to capitalize on emissions trading.) The alleged solutions have more potential for catastrophe than the putative problem. The conclusion of the late climate scientist Roger Revelle—Al Gore's supposed mentor—is worth pondering: the evidence for global warming thus far doesn't warrant any action unless it is justifiable on grounds that have nothing to do with climate.
Lindzen is the Alfred P. Sloan Professor of Meteorology at the Massachusetts Institute of Technology. His research has always been funded exclusively by the U.S. government. He receives no funding from any energy companies.
© 2007 Newsweek, Inc.
Posted by jtf at 4:22 PM