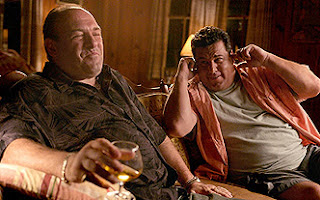 "Tony is not a vindictive man."

Uh, Carm? You want to watch last night's episode and get back to me on that?

Forcing Bacala to get his hands bloody after so many years of avoiding murder was was the worst thing Tony could have done to his brother-in-law, short of whacking one of Bobby's kids. And all over a fight that started with a silly argument over the unofficial Free Parking rule in Monopoly. That is some revenge served up sub-zero, the sort of calculating evil that only one other character in "Sopranos" history would be capable of:

Ever since Janice turned up in Season Two, we've been taught to believe in an obvious gender-based personality inheritance. Tony is his father's son, with Johnny Boy's temper and ego. Janice is Livia's daughter, with the scheming and the passive-agressive manipulation. Simple, right? Not really, according to the final season premiere, "Soprano Home Movies," in which Janice of all people -- delusional Janice, who rewrites every second of her autobiography to make herself into the heroine -- suggests that the roles might be reversed.

And, in fact, killing Richie for punching her in the mouth (presented in a sad, funny alternate history to Carmela) was more a Johnny Boy reaction than a Livia one. Livia wouldn't have shot Richie. She would have henpecked him to death, or found something he loved and taken it from him. What Tony did to Bacala, meanwhile, as payback for the Monopoly brawl, is exactly the move Livia would have made, where Johnny Boy and Janice both would have gone straight to pistols or knives or whatever weapon was handy.

In looking back over the series, I've always wondered how things would have gone if Nancy Marchand hadn't died after Season Two. Livia was so fundamental to the show -- David Chase having based her on his own mother -- that everything after her death feels almost like a backup plan. And yet as the show heads to a close, Livia's spirit remains a presence, and last night's episode was our strongest hint since Season Five's "Cold Cuts" (the one where Tony provoked Janice into attacking him because he was jealous of her good mood) that Tony is in the process of becoming the person he most feared and loathed.

He isn't becoming New Tony, that's for sure. It took a while after last year's shooting, but all the "every day a gift" and "they go about in pity for themselves" quotes couldn't keep Tony's true nature hidden forever. If "Soprano Home Movies" was slower-paced and more claustrophobic than I suspect some of you may have liked, it was also a crucial reminder that Tony is not a nice person -- no matter how much we try to rationalize all his behavior because James Gandolfini is so charismatic. Tony is selfish and judgmental. He nurses grudges and takes advantage of his power as boss to make sure he always wins. He's a monster, even if he's our monster, and even if Livia made him into one.

(She did a number on Janice, too, obviously. Watching Janice flip out over Nica for acting her age and saying "No!" made me feel just a little bit sorry for her for the first time. And it made me feel very sorry for Nica, who's destined to put some therapist's kid through private school.)

The show began with a brief prologue where Tony was arrested for the gun he dropped in the snow at the end of Season Five. (Carmela's "Is this it?" as the Essex County sherriffs pounded on the front door served as a nice opening statement for a season in which the audience is waiting to see when or if Tony will be arrested or killed.) But after cameo appearances by most of the wiseguys from both sides of the Hudson (the Jersey ones awaiting Tony's return from jail, the New York ones greeting the rehabilitated Phil Leotardo and telling jokes about the "farmers" in Jersey), Tony, Carm and the episode headed off for Bacala's cabin for their own road company version of "Who's Afraid of Virginia Woolf?"

Even by the standards of "Sopranos" episodes set largely outside the characters' home turf, this one felt like a departure. Director Tim Van Patten's use of dissolves to illustrate the passage of time, coupled with all those lingering shots of Bacala's lake, gave the precedings a relaxed, almost hypnotic quality, one that made the ugliness of the Monopoly game (even before the brawl) especially shocking. Everyone's having a fine old time telling old stories, getting drunk, singing karaoke, and all of a sudden Tony's getting pounded on by walking-fat-joke Bacala?

The hour was largely a refresher course on Tony, Janice and their history, but it also gave Bacala the dignity he's so often been deprived by the writers. Having to kill that Canadian guy just crushed him, and when the Canadian ripped open Bobby's shirt as the second bullet was fired, it exposed his broken heart for all of us to see.

As I said in my preview last week, if "Soprano Home Movies" was too on the quiet side for your taste (even with the brawl and the shooting and Tony teaching that tree a lesson it won't forget), know that next week's show will likely be more your speed. In the meantime, some other thoughts:

Proving once again that the genius of the show is in the little details, I give you Carmela brushing off the Monopoly piece stuck to Tony's bloody cheek.

Michael Imperioli had, what, 10 or 15 seconds of screentime? Still, Christopher seemed clear-headed in that cameo, so maybe he's on the wagon again. Either way, Tony doesn't seem over the Julianna thing.

Some of the funniest aspects of the show are the things left unsaid. Last year, a big deal was made of Tony getting tough with A.J. and forcing him to do that construction job, and we were left with the implication that A.J. had finally come within spitting distance of a work ethic. So, of course, we return from hiatus and now he's working at a pizzeria. So much for both his maturity and Tony's tough love.

Know your Family: Two important characters to keep an eye on from the brief glimpse of the New York mob are Doc Santoro and Gerry "The Hairdo" Torciano. Doc's the white-haired guy who's been serving as unofficial boss during Phil's recovery, the one the other wiseguys were complaining about. Gerry The Hairdo (possibly my favorite nickname in show history) is the one who complimented Phil on looking good. He popped up several times last season (looking blonder); he was one of Vito's killers.

"Sopranos" hypocrisy in action: the "they oughta build a wall now" comments after Bobby's story about his grandfather entering America illegally.

When Tony started asking Janice, "I'm different how? How am I different?," I can't have been the only one to flash back to the "Funny how?" scene from "Goodfellas," can I?

In addition to Janice's Richie story, we had Tony and Bacala discussing the killing prowess of the late Bacala Sr., played by Burt Young, who coughed himself to death after the bloodiest shootout in "Sopranos" history, in Season Three's "Another Toothpick."

Another subtle callback: Carmela's other birthday present for Tony (the one in the bedroom, not the golf clubs) was a reminder of the scene in Season One's "Boca," where we found out that Tony returns the favor once a year and only once a year.