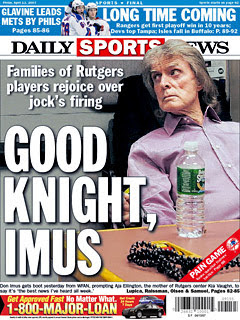 
The storm that came to be known as "The Perfect Storm" because of the book by Sebastian Junger sank a fishing boat called the Andrea Gail in 1991. Everything that happened then is explained now by a collision between a high-pressure system and a low-pressure system and the remnants of a dying and unnamed hurricane. Even now, all this time later, the storm that made the Andrea Gail famous in a book and in a movie is described as an "unprecedented weather condition."

The perfect storm that ended, for now at least, one of the most famous careers in the history of radio began last Wednesday morning, a little more than one week ago, with these three words:
"Nappy-headed ho's."


Don Imus said those words on the "Imus in the Morning" radio program, still being simulcast then on MSNBC. He was talking with his producer about the Rutgers women's basketball team that had lost the NCAA final to Tennessee the night before and "ho's" had been introduced into the conversation and then Imus, trying to be funny, upping the ante, brought race all the way into it with "nappy-headed."


No one knew it at the time, not Imus, not any of his bosses in radio or television, but something had started now. Like something happening out in the ocean before anybody really knew or saw. Something that would become one of the most unprecedented storms in the history of broadcasting. And we were all about to be reminded, all over again, that race is still the main event in this country, more than war, more than anything.


On the last radio show Imus will do at WFAN, on a morning when he raised another million dollars for charity in the space of a few hours, he said, "If I don't say it, we're not talking about it."


Those three words never changed, not once. George Carlin, who has guested on "Imus in the Morning" over the years, used to have a routine about the seven words you could not say on television. Clearly, we have now added a few more.


But no one knew when he said them.


Even 48 hours later, after Imus issued an apology, that apology only brought this response from Myles Brand, the president of the NCAA, and Richard McCormick, the president of Rutgers:
Brand and McCormick referred to Imus' original comments as "unconscionable." They concluded by saying, "It is appropriate that Mr. Imus and MSNBC have apologized."


Nothing about a firing. That would first come from the National Association of Black Journalists. The NABJ issued a call for Imus to be fired, and suddenly the story was being reported that way, starting with ESPN. Suddenly the apology wasn't the story anymore. Even with that, the story was not played big in most Saturday newspapers.


Al Sharpton was in it now, though, saying fire the guy or else. So was Jesse Jackson. Was Jackson going to be outdone by Sharpton? On what planet? Then Imus was appearing on Sharpton's radio show. The three words had not changed, but now they were everywhere.
The storm was dominating everything.


Finally on Tuesday the country saw the women of Rutgers basketball, the ones at whom those three words had been directed, saw Essence Carson and Heather Zurich and Kia Vaughn. And all of the elements for the storm were in place, even before sponsors began to run the other way. We had race and gender together. We had the faces of the college kids who had gotten hit by Don Imus, age 66, white. In a fight like this, particularly with networks and advertisers, youth wins every time, whether it is white or black.


Once MSNBC took Imus off its air - for three words the people doing the firing first heard, and could have been outraged by, early Wednesday morning - Imus had no chance, whether the women of Rutgers basketball agreed to meet with him or not. Did you think CBS, Imus' radio boss, was going to look less noble and virtuous than NBC?


Again: On what planet?


"I've been dishing it out for a long time," Imus said yesterday. "Now it's my turn. I get that."
What nobody got, back at the beginning, is that those three words would silence a show like his, while prompting at the same time what is now routinely described as a National Conversation. The game had changed and Imus had not changed with it. Now there is a whole new game, one where the three words that Imus used on television and radio turned out to be career-enders, at least for now.


A white man said these things about a predominantly black basketball team, said them after one of the great triumphs of their young lives, and no one wanted to hear afterward about the good he has done behind a microphone, the National Conversations he has had about Walter Reed and returning veterans and autism and sickle-cell anemia and all of the rest of it.


Now all those who went after him as hard as they could, who acted as if the only solution was his firing, say they don't want this conversation about race and women and what has happened to the airwaves in this country to end with this firing.


Only they don't get to decide that. Because even after those three words and the perfect storm they caused, the best place to have the kind of conversation they are talking about would have been on the show they just got canceled.


Cleric wanted him gone, but then felt his pain
I-man cranky, mean - and a born survivor
Web spun backlash
You're Don for, CBS tells Imus
It's bigger than Imus
No solo act in I-mess
Posted by jtf at 1:09 PM

Email ThisBlogThis!Share to TwitterShare to FacebookShare to Pinterest
Labels: Media and Culture, Race