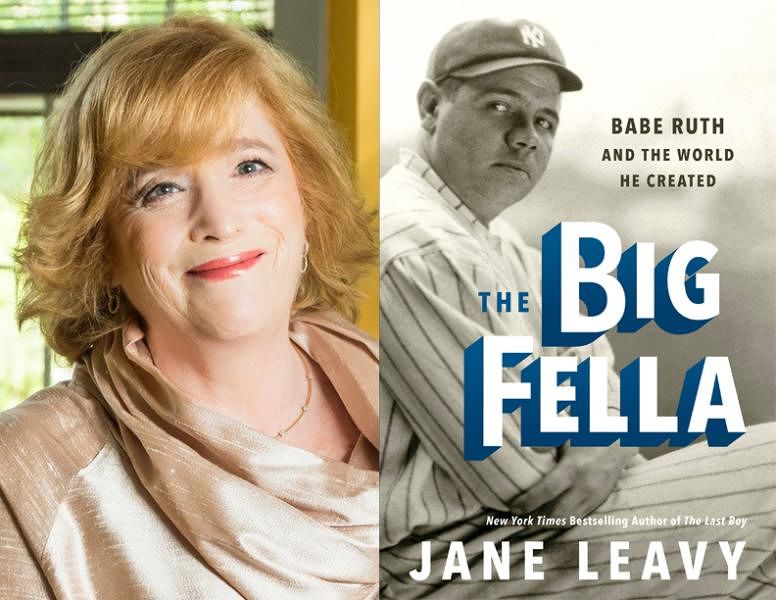 I wish that the venerable The New York Times Book Review treated Jane Leavy’s magnificent new biography, The Big Fella: Babe Ruth and the World He Created, with more respect. I love the Book Review, which I've been reading since I was 10 years-old. It does a great job of  providing in-depth, well-written criticism on a weekly basis at a time when other newspapers have been unable to afford to keep book reviews.
In fact, two of my career highlights have been being reviewed by the Book Review twice, favorably, and writing for it a few times.
But I'm afraid that John Swansburg, a senior editor at The Atlantic, misses the book's powerful American and baseball history.  And he doesn't appreciate Leavy’s serious scholarship and fresh, deep and nuanced portrait of Ruth.
I also believe that Swansburg blows two minuscule mistakes in a 620-page book completely out of proportion. Leavy has 78 pages of “Note and Sources,” spent eight years on research, and conducted 250 interviews.
Leavy is a national treasure who deserves to share a pedestal with luminaries like Robert Caro, Doris Kearns Goodwin, and Ron Chernow. The Big Fella is far more than a baseball biography; it is a deep and riveting study of social, political, and economic issues that still resonate today. If you care about our country’s direction, put down your Trump-related book for a moment and read Leavy’s.
Let’s start with the American Dream and the antiquated notion of upward mobility. A  tremendous part of Ruth’s appeal stemmed from his quintessentially American rags-to-riches rise from Baltimore’s nadir to New York City’s zenith. Leavy describes his wretched childhood in Dickensian detail.
She is the first to plumb the true depths of his parents’ awful divorce; his alcoholic mother slept with the bartender who worked for his father, a bar owner. At age seven, Ruth was shipped off to a reform school. “The school was so overcrowded that there were 130 boys sleeping in dorm rooms meant to house 90,” Leavy writes. “The [Xaverian Brothers running the school] were forced to place beds in dorm hallways.”
In his first Lyndon Johnson biography, Robert Caro took a sandwich and a sleeping bag to camp out at a spot near the Johnson’s ranch in the Texas Hill Country to recreate the environment the president grew up in. Likewise, Leavy roamed the streets of downtown Baltimore for months to get a sense of the city at the turn of the last century, using ancient insurance maps and other ancient documents to guide her.
“Baltimore was the largest unsewered city in the country: every lower-city privy and every upper-city cesspool drained into the back basin and percolated into sea-level streets,” she writes. “An indolent tide kept the human detritus close. A ‘mephitic’ municipal stench blossomed every spring, a smell [H.L.] Mencken likened to ‘a billion polecats’ in summer.”
Reading this, it’s hard not to be reminded of the health crisis in Flint, Michigan or the Trump administration’s current gutting of the Environmental Protection Agency, launched in 1970 by the Nixon administration (insufficiently revered for its many domestic achievements) to safeguard clean air and water. Heaven knows what bacterial diseases spread from Baltimore’s flowing excrement before the city finally installed a sewer system in 1904.
Ruth’s upbringing may explain his sympathy for children and blacks. He adored the former and associated with the latter. The Babe upset the racist baseball commissioner Kennesaw Mountain Landis by going on a 21-day, circus-like barnstorming exhibition tour with Lou Gehrig after the 1927 World Series against Negro Leaguers and other touring black ball clubs. Landis maintained the “color line,” preventing integration until Jackie Robinson broke it in 1947 three years after Landis' death. The Negro Leaguers, in turn, deeply appreciated the respect Ruth paid them. Ruth was being supportive of those leagues by lending his talent and box office draw to the games.
At the same time, he constantly wrestled with rumors about his “black blood,” based on his “big lips and wide nose.” During the 1922 World Series at the Polo Grounds, a vicious Giants bench warmer named Johnny Rawlings shouted “racial slurs from the home dugout in a voice loud enough to be heard on the other side of the Harlem River, where construction on Yankee Stadium was under way.”
After the game,  Ruth charged into the Giants’ locker room, a violation of baseball etiquette, to confront the slanderer dropping the N word.  A lot of shouting ensued and a fist fight nearly broke out.

“Ruth noticed a cohort of baseball writers looking on.
‘Gee, fellows. I didn’t know you were here. Please don’t write anything about this. Please! I’m sorry I came in.’
As he turned to go, he looked at Rawlings and said, “But lay off that stuff. I don’t mind being called a —— or a — —but none of that personal stuff.’
The Giants howled. [emphasis mine].
In his 1974 biography, Babe, [Robert Creamer] filled in the blanks: a prick and c-k s-r.”

Imagine an era when the nation’s most famous figure was unable to defend himself against a public racial onslaught.
And being powerless didn’t just happen on the field. Leavy unearths fresh evidence of how much baseball players were exploited until Marvin Miller unionized them, beginning in the 1960s. At contract time, untutored players were mailed take-it-or-leave-it contracts or were forced to negotiate alone in a room with ball-busting management.
“Roger Maris wasn’t even permitted to bring his brother along with him to negotiate his 1962 contract with the Yankees after breaking Ruth’s home-run record the year before,” Leavy writes.
She devotes an entire page to a Westbrook Pegler column in which the largely forgotten Christy Walsh, Ruth’s marketing agent and PR consigliere, gave him a crash course on the art of negotiation in a train’s drawing room. It’s worth the price of the book.

“I am supposed to say, ‘I want a three-year-contract at $100,000 or I will retire from the great national game,’” Mr. Ruth replied brightly. If they came at the Babe with anything about his debt to baseball, the Babe was to remind them of the seasons when he filled the ballparks all around the leagues for $25,000 and $52,000.”

Though Walsh wisely invested for Ruth and his family for the long haul, the final years of Ruth’s life are a tragic tale. “I know no words for his despondency,” his wife, Claire Ruth, later wrote. Major league baseball turned its back on him as it did on Honus Wagner and Lou Gehrig.
Organized baseball failed to fulfill his dream to become a manager, though he had phenomenal instincts for the game and would have been a supportive teacher. In short, he was abandoned in retirement as he was as a boy.
“Ruth went to very few ball games,” Leavy writes. “The Yankees never gave him a lifetime pass to the Stadium. He had to pay his way into American League ballparks until 1936, when both leagues created a program of passes for ten-year veterans.”
While I interviewed her, the author pointed out a photo in her book of Ruth a month after his retirement. He’s dressed in ridiculous Napoleonic-era military garb as a publicity stunt. I previously reported on Ruth outfitted in a silly 1939 NY World’s Fair uniform, tossing signed balls into crowds while riding on a parade float and shilling for the Fair at business meetings in his uniform.
I had thought he did these publicity stunts for the money, but Leavy, who recounts many of them, such as hitting balls into the ocean at Coney Island for fans to retrieve, maintains that he did them because he still loved pleasing crowds and had nothing better to do.
Today, Ruth in retirement would be paid more than Bill Clinton for his speeches ($200,000+ in 2016) and be honored at every All Star game, and, if he wanted, revel in adulation at autograph shows where he could name his price. And I bet he wouldn’t charge extra to pose for photos for fans, as most of today’s stars do. He would do so for the sheer joy.
As I wrote in my previous post about Ruth’s impact on baseball: “The Big Fella is a must-read for Babe Ruth fans, baseball history buffs, and collectors. Above all, it is a major work of American history by an author with a flair for mesmerizing story-telling.” (Harper Collins, $32.50, available on Amazon and at all bookstores).
Buy it, savor it, and spread the word.
Posted by jtf at 10:29 AM