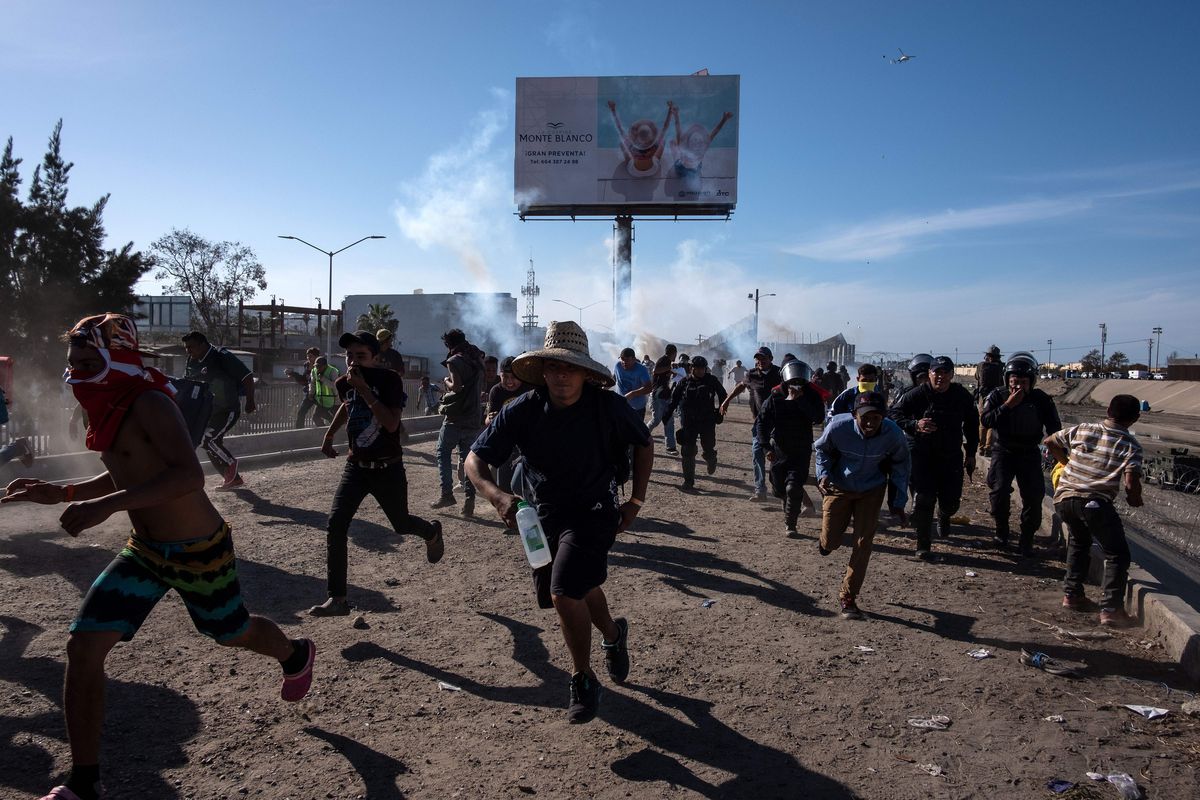 If there is one thing worse than that photograph of a little Honduran boy breathing through an oxygen mask after being hit with tear gas on our Southern border, it’s this:
Using that image as a sentimental weapon to fend off or obliterate clearheaded immigration policy.
But that’s where we are now, aren’t we? The caravan of thousands of Central American migrants is finally at the border. Mexico is keeping them back. The other day, after rocks were thrown at American border officials, several hundred migrants bolted through, trying to illegally rush their way into America, and some were hit with tear gas.
One was the little boy in the photo, receiving medical care in Tijuana. Mexico has made arrests and is in the process of deporting about 100 of the migrants back to Central America.
And now, the left has no answers to what’s going on along the southern border. Instead, we’re given shrieks of rage at President Donald Trump. They conveniently forget that under President Barack Obama, migrants who tried crashing the border and threatening border officials were hit with chemical agents.
Some journalists conveniently forgot this, or perhaps didn’t even bother to look at what Obama had done. The American people who are concerned about their porous borders know this, which is one reason journalism is held in low regard.
The history of illegal immigration along the southern border has long been cynically bipartisan. Establishment Republicans didn’t mind if business was the beneficiary of cheap labor. Republicans talked about border enforcement but repeatedly caved to supply agricultural and other workers important to political donors.
Democrats were once opposed to unfettered immigration, when they were the party of the working class. But Democrats now mock the working class and win elections in the richest counties in America. They’ve long taken the African-American vote for granted, and black voters are finally becoming increasingly dissatisfied. Democrats know they need a new crop of future voters. And they know where they can be found.

Most Americans are offended by this bipartisan cynicism. Trump understood, tapped into it, and became president.
Now I can’t think of any responsible person who likes the idea of children suffering. I don’t think you like it either. Parents brought the little ones into that chaos on the border. I wouldn’t have done it, and perhaps you wouldn’t subject your children to that danger. Yet still, it tears at the heart to see it.
But the heart is not the mind. And as liberal pundits wring their hands about the tear gas and bleat about Trump’s stringent border enforcement, casually tossing words like “fascist” and “racist,” something else is happening.
Millions of Americans who do not consider themselves to be hateful — Republicans and Democrats — are asking simple questions:
Is there anything wrong with mandating that immigrants legally apply for asylum rather than break into the U.S. and fade into America? I happen to think that’s fair, and it’s legal.
Yet where are the liberal Democratic solutions to address those in the migrant caravans determined to push illegally across the borders?
Political asylum is reserved under law for those who are threatened or attacked because of who or what they are. Asylum doesn’t apply to the majority who’d like to come here for better paying jobs and social welfare benefits.
What we have in place of Democratic policy is a steady stream of wailing, anger and virtue signaling. If you want to know how extreme, how ridiculous it is becoming, consider that Democratic darling U.S. Rep. Alexandria Ocasio-Cortez has compared the caravan to Jews fleeing the Holocaust.
Unlike what happened to the Jews in Europe, the Central American migrants are not being exterminated by their own government. In tweeting this nonsense, Ocasio-Cortez diminishes the horrors of the Holocaust, and proves herself to be, of course, a fool.
Remember that for several weeks leading up to the midterm elections, as the migrant caravan formed in Central America and made its way north, Trump, in his typically heavy-handed and overstated Trumpian fashion, kept loudly insisting that the caravan was a danger, replete with “criminals” and “Middle Easterners.”
Are there “Middle Easterners” among them? It sounds far-fetched. Are they all “criminals”? No. Some are thugs, but many want a better life.
Tony Hernandez, the brother of Honduran President Juan Orlando Hernandez, is allegedly something of a narco kingpin. He was just arrested the other day in Miami on cocaine and weapons charges.
But if living in fear because violent narco kingpins are nearby is grounds for asylum, people in a few Chicago neighborhoods I can think of should apply.
The Democratic response to the caravan as it trudged north was also cynical. Democratic politicians insist they’re not for open borders, but they don’t support strict border enforcement. Theirs is a let-them-in-and-sort-it-out-later approach. This is a de facto open borders policy.
And just weeks ago, those who dared suggest that a country should have secure borders were subject to media shaming. Caravan? What caravan? They’re just women and tiny children in strollers. How dare you say otherwise?
But that wasn’t true either, was it? You read the pundits, you heard the snickers over the radio, and saw the smirks on TV. Americans got the point: Shut up about securing your own borders or be shamed.
And that’s not sound policy, either, is it?
Listen to “The Chicago Way” podcast with John Kass and Jeff Carlin — atwww.wgnradio.com/category/wgn-plus/thechicagoway.
jskass@chicagotribune.com
Twitter @John_Kass
Posted by jtf at 8:42 AM