'Vietnam' by Max Hastings is masterful account of the war 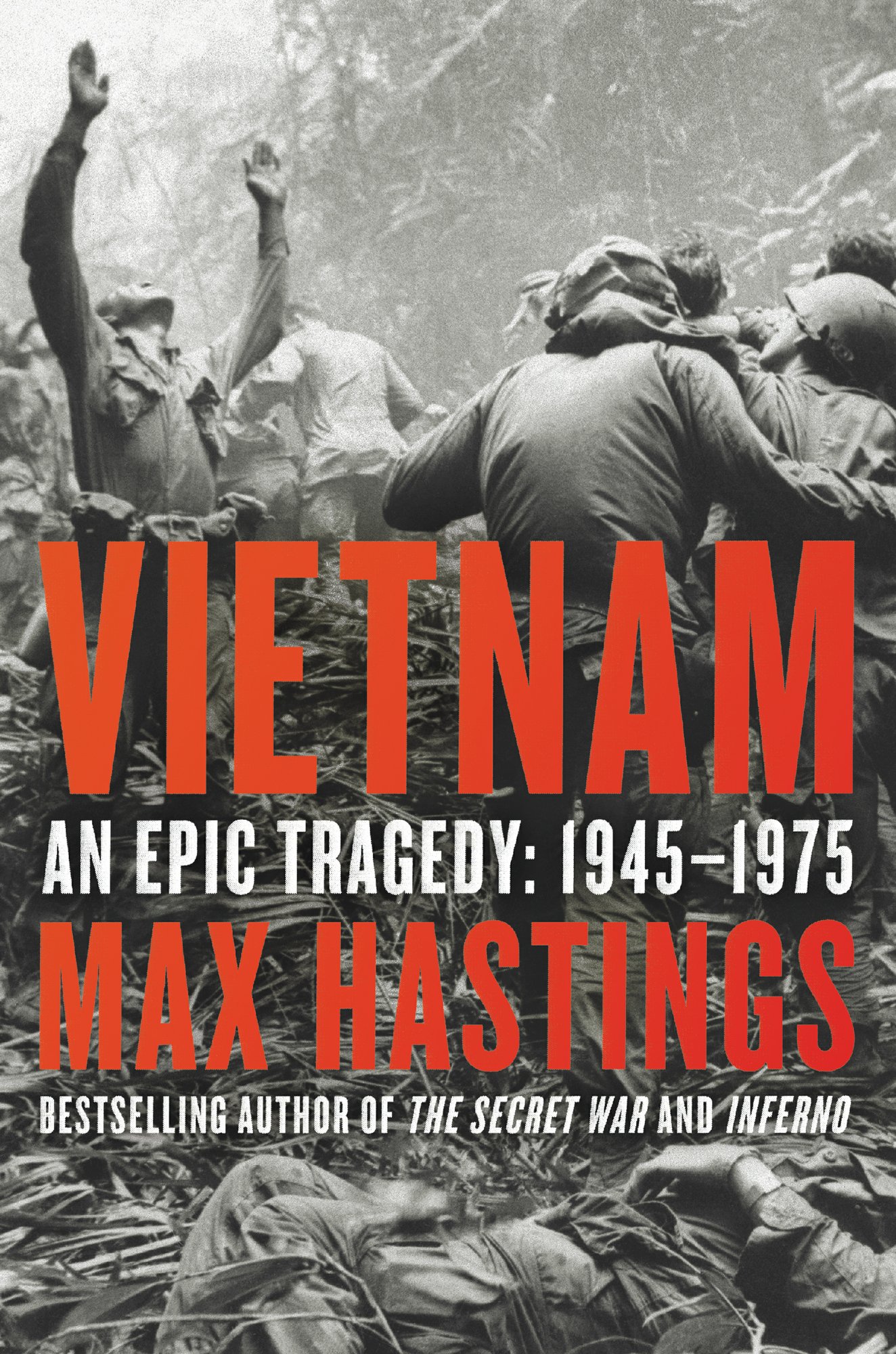 British journalist Max Hastings, noted for his critically acclaimed books about World War II, has fast-forwarded his research and writing talent to a war that many Americans would like to forget.
His 900-page work chronicles Vietnam's tragic history from Ho Chi Minh's proclamation of an independent state after the 1945 Japanese surrender to the collapse of the South Vietnamese regime 30 years later after the United States cut off ground and air support. Despite ample accounts of heroism and sacrifice on all sides, it's a story in which each of the principal players — France, the United States, Saigon, Hanoi and the Viet Cong — comes away with well-deserved opprobrium.
Unsurprisingly, Hastings concludes that Vietnam was a catastrophe, one that took the lives of as many as 2 million to 3 million combatants and civilians. The war claimed 58,000 American lives, but the number of Vietnamese dead was 40 times greater.
This definitive narrative describes how the French debacle at Dien Bien Phu gave rise to the domino theory and the need to halt the spread of communist domination in Southeast Asia. There were more than 500,000 U.S. service personnel in Vietnam by the time of the 1968 Tet offensive, a stunning military defeat for the North Vietnamese and Viet Cong that was transformed into a propaganda victory.
After Tet, the war was never the same. CBS anchor Walter Cronkite declared the nation was mired in stalemate, President Lyndon B. Johnson said he would not seek re-election, and the U.S. abandoned any hope of victory and sought instead to extricate itself while avoiding explicit defeat.
The fighting would continue for another seven years, a period marked by the My Lai massacre, the invasion of Cambodia and the 1972 Christmas bombing, which Hastings says was designed for partisan political purposes and had no military justification.
The narrative includes detailed accounts of all the major battles, with riveting descriptions of what life was like for combatants on both sides. The reader relives the experiences of GIs plodding through booby-trapped jungle, North Vietnamese dodging B52 strikes while heading south on the Ho Chi Minh trail and helicopter pilots braving fire from hot landing zones while inserting troops or extricating the wounded.
Many of the campaigns covered in the book are familiar to those who served in Vietnam or followed the war in the media, but a rarely mentioned 1968 battle at Dai Do in which a Marine battalion suffered devastating losses gets special scrutiny. During three days of bloody combat, Marines displayed both courage and cowardice in a series of senseless assaults against a well-entrenched enemy. The author says the American commanders who "displayed folly of Crimean proportions" shoulder much of the blame.
Drug abuse, racial strife and the erosion of discipline and the will to fight took their toll on U.S. troops. By contrast, Hastings points to the stronger performance of the small contingents of Australians who were disciplined in their use of firepower and exercised better fieldcraft.
Neither side comes away with clean hands, but Hastings writes that news media were quick to record atrocities by U.S. troops and the brutality on the communist side went largely unreported, fueling antiwar propaganda that portrayed the North as the virtuous party.
Hastings' narrative, along with Ken Burns' masterful series on PBS, offers a well-balanced account of a war that ended more than four decades ago. The author weaves anecdotal and first-person accounts from both sides into the overall history to produce a compelling account that veterans of the war, those who felt its impact at home and readers born decades after the fighting ended will find hard to put down.
Today, with the rise of the internet and globalization, the outcome of the lengthy struggle may seem less cut and dried than it first appeared. Although Vietnam still endures harsh rural poverty and authoritarian rule, America's economic and cultural influences are leaving their mark on its former enemy.
"Whereas the US armed forced failed with B-52s, defoliants and Spooky gunships, YouTube and Johnny Depp have proved irresistible," Hastings writes.

Max Hastings has been going to the wars for close on half a century. Fascinated since he was a boy by all things military, he has reported with distinction on many conflicts as well as writing as a historian about those that occurred before his time. It has been an obsession, but one that he has nurtured into a major talent. He has long since shed the romantic view of combat evident in his early book on Yoni Netanyahu, the hero of Entebbe, to arrive at a more complex understanding of war, the nature of soldiering and the limits of military force.
Now he has turned his formidable guns on the Vietnam war, which so profoundly shaped the post-second world war era, gravely damaging a US that had previously had some claim to both moral and political world leadership. America’s fundamental mistake, as Hastings emphasises, was to think that military strength, however great, could make up for political failure. The anti-communist leanings of a substantial portion of the south’s population were not enough, in the absence of a worthwhile state, to ensure the survival of South Vietnam. The lessons of the war, needless to say, have been only half learned, not only by America but by a Russia that, in Afghanistan, repeated some of America’s Indochina mistakes, by a China even now holding down minorities by brute force and by a Vietnam still unable to fully relax its harsh grip on society.
Hastings himself says that “the literature of the Vietnam war is immense”. Why, then, add to it? It is a good question, but one to which his book provides a resounding answer. This is a work of considerable quality, marked by a possibly unique combination of military expertise, historical grasp and journalistic skill in unearthing hitherto undiscovered human stories of the war, as well as judiciously selecting from among others already known. It helps, too, not to be an American, because that lends a certain useful distance. There are some omissions: little, for example, on Truong Chinh’s malign influence on North Vietnam in the early years, and no mention of Bui Tin, the Northern soldier and author who has cast so much light on Hanoi’s policy choices. Such cavils aside, Hastings presents a vast panorama, admirably balanced and well managed, which does not neglect the geopolitical or the strategic but vividly brings home the reality of the war as experienced by individuals.
Those who figure include American officers and officials interviewed by Hastings, but also Russian air defence advisers, Chinese railway supervisors, British spies and Hollywood stars. Hastings expands the war’s cast to bring in some whose testimony has not previously been fully explored as well as some until now unrecorded. Many stories are of death, maiming, rape and destruction; others scalp-prickling tales of courage or cowardice under fire; others still of moments of decency and empathy. There are also stories that are funny, as in the case of the South Vietnamese general who forgot to arrive in time for a planned coup, or that of the gourmet North Vietnamese colonel, sick of the privations of the Ho Chi Minh trail, who wrote more in his journal about rare good meals than he did about the hard fighting he endured.

Alongside these vignettes are accounts of battles, not only of the best-known encounters, but of engagements now barely remembered, which Hastings covers partly for that reason but also because they were symptomatic of what was wrong with the American way of war. At times, commanders exhibited, he writes, “folly of Crimean proportions”. His judgment here is typical of the severity with which he deals with the stupidities, lies and crimes of everybody from the level of the White House and the Dragon Court, the north’s military headquarters, on down to US army lieutenants who wouldn’t come out of their bunkers or the Vietcong guerrilla who slit the throats of a family of nine, including six children.
It is a severity tempered with understanding, but Hastings makes even a reader familiar with these events grasp anew that it is entirely justified. This was a truly terrible war, marked from the outset by gross deceptions as well as daily cruelties. It was never more terrible and more shaming than in its last phase, when the Americans fought on, then encouraged their South Vietnamese allies to fight on, well knowing that the war was lost.
The obduracy of Le Duan, the dominant figure in the North Vietnamese leadership, clinging to the fantasy of a “general uprising” in the south and heedless of casualties as he ordered repeated general offensives, deserves condemnation. Yet the callousness of Nixon and Kissinger, presiding, as Hastings writes, over “gratuitous years of carnage, merely to conceal from the electorate, for their own partisan purpose, the inevitability of humiliation in Indochina”, seems worse. Le Duan had an attainable objective, the independence of a united Vietnam. But the Americans had by that stage no purpose other than to distract attention from defeat at whatever cost in blood. It was a disgraceful end to an intervention conceived in ignorance, based on false premises and conducted with increasing disregard for reality on the ground. It is a very sad story and one that Hastings tells very well.
Martin Woollacott is a former foreign correspondent for the Guardian.
•Vietnam: An Epic Tragedy, 1945-1975 by Max Hastings is published by William Collins (£30). To order a copy for £25.80 go to guardianbookshop.com or call 0330 333 6846. Free UK p&p over £10, online orders only. Phone orders min p&p of £1.99

Related:
Bullets, Bodies and Late-Night Bars-
https://www.maxhastings.com/2018/bullets-bodies-and-late-night-bars-max-hastings-adventures-in-vietnam/
Posted by jtf at 5:14 AM