First, they came for the Catholics

My latest column examines the Obama administration’s continuing war on religious health care professionals, which I spotlighted when the ACLU first launched its salvo against Catholic hospitals in 2010. What’s noteworthy now is the united front that Catholic bishops (who have traditionally taken big government positions) are now taking against the Obamacare abortion edict. Better late than never.

The Anchoress and LifeNews have excellent coverage of the controversy — see here, here, here, and here. As I mention below, the Becket Fund is representing two schools suing over the unconstitutional abortion mandate in federal court. Florida GOP Sen. Marco Rubio is sponsoring a bill to restore the conscience clause protections for health care providers of faith.

This outrageous power grab is one which both fiscal and social conservative can rally behind. Every one of the GOP presidential candidates should be raising it on the campaign trail, in debates, and media interviews. Send messages to @HHSGov and @WhiteHouse. The grass-roots revolt is growing. NCHLA has a petition and action alert info here.

First, they came for the Catholics 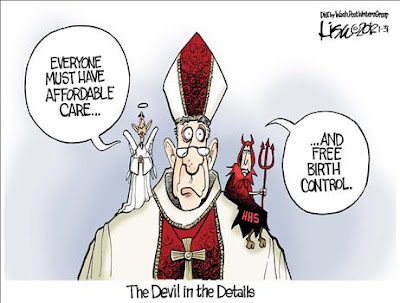 President Obama and his radical feminist enforcers have had it in for Catholic medical providers from the get-go. It’s about time all people of faith fought back against this unprecedented encroachment on religious liberty. First, they came for the Catholics. Who’s next?

This weekend, Catholic bishops informed parishioners of the recent White House edict forcing religious hospitals, schools, charities, and other health and social service providers to provide “free” abortifacient pills, sterilizations, and contraception on demand in their insurance plans – even if it violates their moral consciences and teachings of their churches.

NARAL, NOW, Ms. Magazine, and the Feminist Majority Foundation all cheered the administration’s abuse of the Obamacare law to ram abortion down pro-life medical professionals’ throats. Femme dinosaur Eleanor Smeal gloated over the news that the administration had rejected church officials’ pleas for compromises: “At last,” she exulted, the Left’s goal of “no-cost birth control” for all had been achieved.

As always, tolerance is a one-way street in the Age of Obama. “Choice” is in the eye (and iron fist) of the First Amendment usurper.

Like the rising number of states who have revolted against the individual health care care mandate at the ballot box and in the courts, targeted Catholics have risen up against the Obamacare regime. Arlington (Va.) Bishop Paul Loverde didn’t mince words, calling the U.S. Department Health and Human Services order “a direct attack against religious liberty. This ill-considered policy comprises a truly radical break with the liberties that have underpinned our nation since its founding.” Several bishops vowed publicly to fight the mandate.

Bishop Alexander Sample of Marquette, Michigan asserted plainly: “We cannot—we will not—comply with this unjust law.”

White House press secretary Jay Carney blithely denied on Tuesday that “there are any constitutional rights issues” involved in the brewing battle. Yet, the Shut Up and Hand Out Abortion Pills order undermines a unanimous Supreme Court ruling issued just last week upholding a religious employer’s right to determine whom to hire and fire. And two private colleges have filed federal suits against the government to overturn the unconstitutional abortion coverage decree.

Hannah Smith, senior counsel at the non-profit law firm, the Becket Fund, which is representing the schools boiled it down for Bloomberg News: “This is not really about access to contraception. The mandate is about forcing these religious groups to pay for it against their beliefs.”

How did we get here? The first salvo came in December 2010, when the American Civil Liberties Union pushed HHS and its Planned Parenthood-championing secretary, Kathleen “The Shredder” Sebelius, to force Catholic hospitals to perform abortions in violation of their core moral commitment to protecting the lives of the unborn.

The ACLU called for a litigious fishing expedition against Catholic hospitals nationwide that refuse to provide “emergency” contraception and abortions to women. In their sights: Devout Phoenix Catholic Bishop Thomas Olmsted, who revoked the Catholic status of a rogue hospital that performed several direct abortions, provided birth control pills and presided over sterilizations against the church’s ethical and religious directives for health care.

ACLU and the feminists have joined with Obama to threaten and sabotage the First Amendment rights of religious-based health care entities. The agenda is not increased “access” to health care services. The ultimate goal is to shut down health care providers – Catholic health care institutions employ about 540,000 full-time workers and 240,000 part-time workers – whose religious views cannot be tolerated by secular zealots and radical social engineers.

Is it any surprise their counterparts in the “Occupy” movement have moved from protesting “Wall Street” to harassing pro-life marchers in Washington, D.C., and hurling condoms at Catholic school girls in Rhode Island?

Birds of a lawless, bigoted feather bully together.

~ For the latest breaking news, be sure to join Michelle's e-mail list ~
Posted by jtf at 6:40 AM