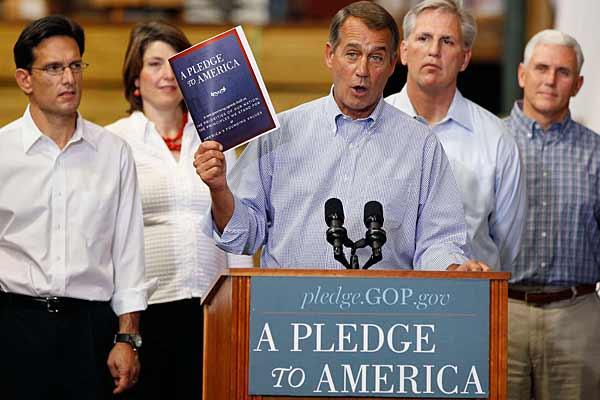 House Republican Leader John Boehner holds up a copy of 'A Pledge to America' while outlining 'A New Governing Agenda' for the 111th Congress at the Tart Lumber Company in Sterling, Va., in 2010. (Larry Downing/Reuters)
Forget the fratricidal warfare between two establishment soldiers so harmonious on substance that their contest, inevitably, has descended into a poisonous, personal food-fight. The problem is not the GOP infighting. The problem is the GOP. Republicans are simply not interested in limiting government or addressing our death spiral of spending.

My weekend column was about the dog-and-pony show that congressional Republicans just put on to snow you into thinking they oppose the $2.4 trillion debt-ceiling increase they actually approved only six months ago. Now, get ready for House Republicans to unveil their $260 billion transportation bill.

The federal government should not be in the transportation business at all. A federal role was rationalized in the mid-Fifties to finance the construction of interstate highways. As National Review’s editors observed in 2005, that project was completed in the early Eighties, at which time the fuel tax that funded it should have been repealed and the upkeep of highways left to the states. “Instead,” they wrote, “Congress morphed the program into a slush fund for some of its most indefensible pork-barrel spending.”

The cover story for this permanent spendathon is that we now have a national highway “system” that ought to be financed by its main users. “Systems” is the abracadabra chanted by the progressives who run both parties when they’re about to pick your pocket. We don’t have a highway “system.” We have 50 states, whose widely varying transit needs are best known, and can be best addressed, by the affected local communities.

Plus, see how easily a “highway system” morphs into a “transportation system.” The taxes that Leviathan confiscates from drivers, purportedly for road construction and maintenance, are actually redistributed to subsidize other forms of transit preferred by progressives — including walking. For that, you can thank Republicans. With a compassionate wink from President Bush, the Republican Congress enacted an obscene $286.5 billion transportation bill in 2005, assigning the act one of those precious Washington acronyms — SAFETEA-LU (who cares what it stands for?). The editors accurately described it as a “monstrosity of wasteful spending.”

SAFETEA-LU featured all the uglies that outraged voters into telling the GOP to take a hike in the 2006 and 2008 elections. These included Alaska’s infamous $250 million “Bridge to Nowhere,” one of the bill’s 6,376 earmarks totaling $24 billion — you know, the sorts of budget-busting recklessness Republicans promised us they’d sworn off in order to get elected in 2010.

One of SAFETEA-LU’s worst aspects — and that’s saying something — was that it blew to smithereens the premise that federal transportation spending must be limited to the federal fuel-tax receipts collected to pay for it. As Red State’s Ross Vought explains, the Republican Congress increased expenditures on transportation by a whopping 31 percent. As the pols well knew, that was leaps and bounds beyond what the fuel tax would generate, especially given that collections flag when spiking gas prices reduce driving.

For households, less money coming in means less spending — you mere mortals must make grown-up choices about what is essential and what must be deferred. That, of course, is not how it works for Congress, regardless of which party is minding the store. Control over other people’s money is power. So once transportation spending broke out of its fuel-tax moorings, there was no going back. Since 2008, as our national debt has zoomed from $10 trillion toward $17 trillion, Vought calculates that Congress has taken an astounding $34.5 billion from general taxpayer funds to maintain the unsustainable SAFETEA-LU spending levels.

And now that the “Pledge to America” crowd that promised to stop the madness is back in charge, what do you suppose the plan is? Why, to persist in the madness. Team Boehner, whose “pledge” to voters explicitly promised “to stop out-of-control spending and reduce the size of government,” proposes to continue funding transportation at “current levels” for the next five years, which translates to an additional budget shortfall of about $60 billion dollars. So much for decrying “Washington Democrats [who] refuse to listen to the American people and eliminate, restrain, or even budget for their out-of-control spending spree.” So much for warning that, unless Republicans are returned to the helm, “Washington will try to get away with continuing to spend at current ‘stimulus’ levels. We cannot allow that to happen.”

It’s happening. Naturally, conservatives who expected Republicans to do what they promised are apt to go ballistic. So, just as in the debt-ceiling fiasco, the establishment’s plan is to dazzle the rubes with some smoke-and-mirrors. On the debt ceiling, it was phantom cuts that would occur, um, someday. This time around it is a commitment to ramp up oil and gas production, the additional revenues from which, we’re told, will alleviate the transportation burden.

It is a cynical joke, the sort you’d expect from the folks who brought you last week’s debt ceiling “disapproval” charade. Michael Needham, who heads up the Heritage Foundation’s activist arm, Heritage Action for America, put it well: “One of the problems you have in Washington is you take really bad legislation, which the highway bill is, and you put a sweetener in it. That’s what’s going on here.”

Of course we want more energy production — “Drill, baby, drill!” and all that. But energy production is imperative on its own economic and national-security merits. Like federal transportation spending, moreover, it is the kind of “major legislation” that Boehner, Cantor & Co. pledged during the 2010 campaign to “advance . . . one issue at a time.” Yet here they come again, same old GOP, telling us we cannot have what is good and essential unless we simultaneously swallow what is bad and profligate — exactly the practice they promised to end.

Washington should not be involved in transportation at all, but at least there was some sense to the original rationale that tied highway spending to gas taxes. There is no such connection between transportation and energy taxes. And let’s remember Republicans’ fabulous debt-ceiling formula: Obama gets his trillions to spend right away, and we get our billions in spending cuts maybe ten years from now, maybe never. They’re running transportation off the same page in the playbook: Transportation spending pours out by the tens of billions, right on schedule, but the energy revenues, if they materialize at all, are speculative and comparatively paltry — maybe a little over $5 billion, likely a lot less.

That’s a drop in a new $60 billion debt bucket. The rest would have to be made up by more taxes and/or spending offsets. Besides cruising us more rapidly toward Mark Steyn’s Armageddon, the Republican proposal would ensnare transportation more tightly in Washington’s budget web. It is pure fantasy to believe these guys would ever return it to state control.

— Andrew C. McCarthy, a senior fellow at the National Review Institute, is the author, most recently, of The Grand Jihad: How Islam and the Left Sabotage America.
Posted by jtf at 9:12 AM