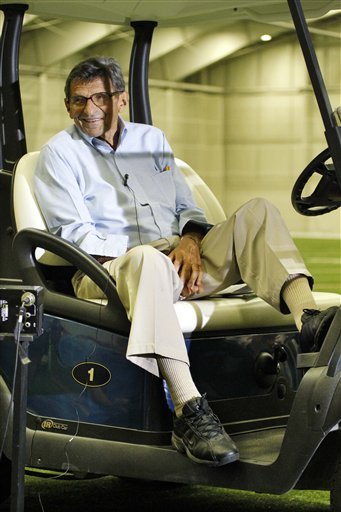 Thanks for the memories, for stubbornly acting your age, for not taking any guff from anyone.

Most of all, thanks for clinging faithfully to the fading integrity of intercollegiate athletics.

The Penn State football coach repeated his familiar mantra about running a clean program. It's the same message he has voiced for decades.

But Paterno had the guts to say it last week at the same time a Yahoo! Sports investigation was airing the University of Miami's dirty laundry.

To paraphrase Paterno, a lot of coaches are hesitant to draw the line with boosters and other friends of the program out of some fear it could limit financial contributions to their program.

"I'd be less than honest if I told you it's not flattering to hear people say you run a good program," said Paterno, who's entering his 46th season as Penn State's head coach. "I was delighted to be on that (ESPN) show with (Duke basketball coach) Mike Krzyzewski (discussing the state of college athletics). He has stayed at Duke. He's turned down other opportunities. A lot of guys, unfortunately, can't have that attitude because it's the trustees that give money. They want you to play this guy, that guy."

Born in 1926, Paterno has seen it all. He's outlasted legendary coaching peers Bear Bryant, Woody Hayes, Bo Schembechler and Eddie Robinson -- and lived to tell about it.

He coaches by his own set of rules and makes those around him fall in line. Including his players.

Like all coaches, Paterno needs good players to win.

Like all coaches, Paterno has made concessions through the years. Players, after all, have their egos, too -- just like coaches.

Players want to be made to feel important. Paterno, I'm sure, has done his share of sweet-talking star players. He does have the most victories of any major college football coach.

What separates Paterno from most of his peers -- besides his advanced age -- is his desire to do things his way while keeping things in proper perspective.

The truth is, Paterno doesn't care what you or I think. That's what makes him special, a coach too old and set in his ways to change or bow to public opinion -- and proud of it.

"When I first got here, I needed facilities," said Paterno. "I said we've got to go out and raise money. I always ended up, 'I want your money, but I don't want your two cents.'

Yes, indeed, Paterno can be stubborn. He knows his critics believe the game has passed him by. But he won't leave until he's good and ready.

Even after Penn State finished 7-6 last season while struggling to find a starting quarterback, Paterno remains in charge.

Being a living institution has its benefits, even if it didn't save Bobby Bowden.

Would Paterno's coaching style work at the University of Miami?

JoePa in South Beach? Be serious.

There's no way Paterno would have tolerated an unscrupulous booster like Nevin Shapiro anywhere near his players, much less permitted Shapiro to greet players on the field prior to a game.

Paterno would have gone ballistic.

If nothing else, Paterno demands respect. It's either his way or ... his way.

"It's an honor to play for him. I'm very fortunate and blessed to be in the situation I'm in, learning from one of the great ones," said quarterback Matt McGloin, who apologized for throwing the pass to wide receiver Devon Smith which led to Smith's recent sideline collision with Paterno. "I feel bad about what happened, considering I'm the one who threw it to Devon. I'm glad he's doing better."

Deep down, college kids want to be disciplined. They want someone like the grandfatherly Paterno, a coach so old-school that he's prehistoric, telling them "no" when everyone else is promising them the world.

It's a refreshing and rare quality from a one-in-a-kind coach. When Paterno leaves, he'll take a huge chunk of integrity with him.

Thanks for everything, Joe.

Yes, he's too old to change, and who says that's a bad thing?