For Glen Campbell, the past is a present 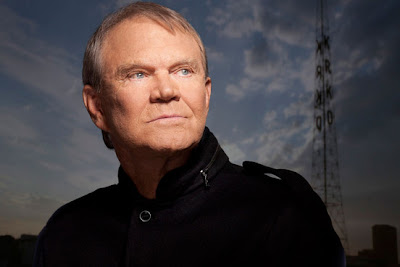 "Wichita Lineman". "Galveston". "By the Time I Get to Phoenix". "Rhinestone Cowboy". Glen Campbell's country and pop hits stand among the most memorable in the American songbook.

Except to him. Seated in a sunlit parlor, he strikes up "Gentle on My Mind", muscle memory driving his fingers across the guitar strings. He flubs the lyrics in the second verse, lost and confounded.

That's a question worrying his family, fans, friends and peers. Campbell, 75, was diagnosed early this year with Alzheimer's, an incurable, memory-crippling disease with varying rates of degeneration. On a recent afternoon after a morning of golf, the genial Campbell is upbeat, enthusiastic and mentally crisp about his childhood days and early career highlights but often repetitive and sporadically foggy, especially regarding recent events.

He disclosed his illness in June, along with word of a prolonged farewell. His final album, the powerful, heartrending Ghost on the Canvas, arrives Tuesday, and the Glen Campbell Goodbye Tour will take him around the world one last time (most dates are planned for 2012). Four of his eight children are in his touring band.

"I like to play and sing, and I have the people I love around me, and that's why I'm doing it," Campbell says, beaming as he recalls a triumphant 22-song concert July 15 in Biloxi, Miss., the first since revealing his condition. "It was wonderful! The acoustics were just right. I was grinning like a dog passing peach seeds."

He's sitting on a couch in the living room of the spacious Mediterranean home he and his fourth wife, Kim, 53, bought six years ago after living in Phoenix for 23 years. Their dogs, a giant schnauzer named Kona and huge German shepherd J.J., are sprawled nearby. Campbell suggests Ghost may not be his swan song. "I'm only 75," he says with a laugh. "I still want to do an album called Old Folks' Songs."

One reason for such optimism may be his perhaps fortunate inability to retain the bad news he has been told over and over. Far from traumatized, he vacillates between blasé and oblivious about his diagnosis.

His wife, Kim, interjects, "Or, as we like to call it, 'part-timers.' That's why you're forgetting things."

Campbell nods. "Oh, yeah, it has helped me more than anything. Some things I don't want to remember. That's how I look at it now."

Ghost's deeply personal song cycle, with original songs provided by such modern admirers as Jakob Dylan, Paul Westerberg and Teddy Thompson, was produced by Julian Raymond, who plucked lyrics for five songs from conversations with Campbell. Players ranging from Dick Dale and Chris Isaak to Billy Corgan and the Dandy Warhols lined up to accompany their hero.

Raymond also produced 2008's cover collection, Meet Glen Campbell, which sold a modest 24,000 copies, according to Nielsen SoundScan. Predecessor Love Is the Answer: 24 Songs of Faith, Hope and Love (2004) sold a paltry 5,000. Despite early success that racked up 21 top 40 hits, nine No. 1 country albums and sales of 45 million records, Campbell has enjoyed few chart triumphs since the '70s, selling 1.2 million albums in the SoundScan era (since 1991).

That could change. Many liken Ghost's brave, devastating tunes to the creative rebound by an ailing Johnny Cash at Rick Rubin's American Recordings label in the mid-'90s. Early reviews are laudatory, and Campbell's ailment has triggered a reassessment of his remarkable catalog.

Raymond marvels at Campbell's buried résumé as a sideman, especially with the Wrecking Crew session band that backed scores of hitmakers, fleshed out Phil Spector's "Wall of Sound" and served as the house band for 1964's fabled all-star concert The T.A.M.I. Show. 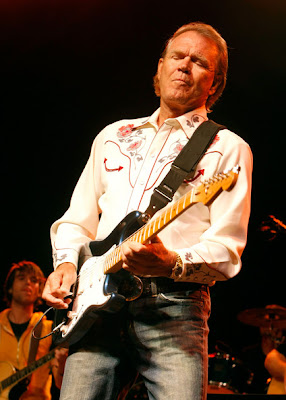 "Those guys could go from one radical style to the other, from Nat King Cole and The Monkees to Sonny and Cher," Raymond says. "Can you imagine being in a room when he recorded 'Good Vibrations' or 'Strangers in the Night'? Not to mention his own great songs. It's amazing the history he's had."

Campbell's impaired memory did not hamper his drive or skills, says Raymond, stressing their intention to craft a record true to the singer's personality and sound. "Glen picked songs he enjoyed, stuff he was lyrically drawn to. Everyone involved wanted to make not just a good record, but a good Glen Campbell record."

In the studio, Campbell "doesn't just go in and perform a song," Raymond says. "He puts his stamp on it. He treats songs the way a producer does. He speeds up the tempo. He's got cool guitar ideas. He makes changes in arrangements and lyrics."

Campbell, tan and trim in a Western shirt, jeans and brown suede cowboy boots, recalls little about Ghost's creation but speaks enthusiastically about his childhood and glory days.

"I'll tell you, my dad played and sang, and it didn't take me long to figure out that playing a guitar was a whole lot better than getting ahold of a hoe handle or chopping cotton, man," says Campbell, who was born to sharecroppers in tiny Delight, Ark. "I listened to a battery radio, old country and pop stuff. Because I was singing all the time, my dad bought me a $7.50 guitar. My sister still has that old guitar. I'll have to get that next time I see her.

"We lived on the farm, and our mode of transportation was wagon and team. No electricity. I'm the seventh son of 12 kids — eight boys and four girls. Mom and Dad handled that very well. But I wanted to get out."

Campbell knocked around the Southwest playing in bands before he headed to Los Angeles and found session work. The self-taught guitarist couldn't read music, but Campbell's playing was immaculate (modeled largely after jazz pioneer Django Reinhardt, "the most awesome player I ever heard"), and he possessed a sterling tenor and broad range. He was clearly bound for greatness but in no hurry for solo fame.

"I enjoyed that more than any time in my career," he says of his low-profile sideman gigs. "I was really in demand. I could put on a capo (a fret brace to raise the string pitch) and play anything. I was playing with the best folks in the world. They were wonderful. I played with the Beach Boys when Brian (Wilson) had his feet in the sandbox writing Pet Sounds.

"I did 'Viva Las Vegas' with Elvis. We were both from the sticks. What a talent. Frank Sinatra was wonderful. He always said, 'Hey, good job, guys.' And Dean Martin was my favorite. I was floating on cloud nine. To play with that caliber of musicians, it really opened my eyes and made my playing better."

Kim reminds him of jingles he did, and Campbell brightens.

"Oh, yeah, commercials paid good, too!" he says and starts singing, "Is it true blondes have more fun? Look at her go, look at her go! Lady Clairol blonde!"

They giggle, then Kim prods him to do his impression of John Wayne, who drafted Campbell for 1969's True Grit.

"Can you imagine walking in and doing a Western with John Wayne?" Campbell says, eyes wide. "I wasn't an actor! John said, 'Don't worry about it.' He was great: 'Aw, come on, cowboy!' I could ride horses, but they got me on the smallest horse they could find. It looked like a Shetland pony."

The movie theme, sung by Campbell, was the first country song nominated for an Oscar. Told it lost to "Raindrops Keep Fallin' on My Head", he cracks, "Oh, that stupid thing. I remember now."

He broke through as a solo artist with 1967's "Gentle on My Mind", then "By the Time I Get to Phoenix" and his favorite, "Wichita Lineman", one of several Campbell hits written by Jimmy Webb.

"I got chill bumps the first time I heard it," Campbell says, solemnly quoting a verse. "I said, 'If this song ain't a hit, I'm going back to picking cotton.' That's a killer song, not just because old Glen Campbell is singing it."

But Campbell sold it, Kim insists, telling him, "A lot of people had recorded Jimmy Webb songs before, but they weren't hits until you sang them."

Campbell grins at the former Radio City Music Hall Rockette he met on a blind date in 1981 and married in 1982. "She's the one who kept Glen Campbell going," he says. "I've been so blessed with her. A wonderful woman. You don't go away kicking yourself. She really showed me that.

"What causes more pain than anything is people lying or cheating. When you look back, wow, some of the stupid things you do."

Ghost's poignant "Strong" and "There's No Me … Without You" address Campbell's devotion to Kim, who helped him overcome his drug and booze sprees. He sobered up by 1987 but relapsed and was arrested for hit-and-run in Phoenix in 2003, spending 10 days in jail after pleading guilty to drunken driving. Tests during a subsequent stint in the Betty Ford Center detected mild cognitive impairment, but his condition didn't deteriorate until last year.

He attributes his undiminished vocal skills to "no alcohol, stupid drugs or whatever" in recent years. "I realized I could play and sing, and I'd be stupid to waste it. I had to grow up."

He's happy to lose flashbacks of defeat and misdeeds. As the light dims, what memory does he cling to?

"My mom and dad," Campbell says somberly. "They raised 12 kids in the middle of nothing. We went to pick tomatoes at harvests in Indiana. The whole family. That was our big cash flow for the year.

"You learn to work hard. You learn not to be an evil person. I would give that lesson to the world."