Obama’s energy agenda has been a very expensive failure. 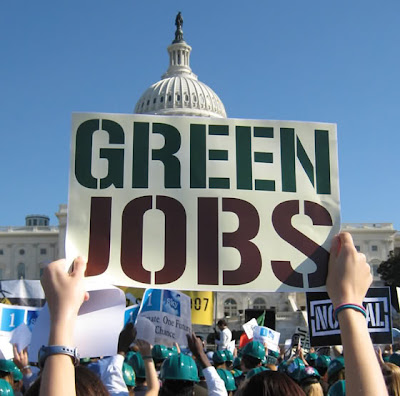 I think the first one I saw was in Ohio. But I know that by the time I passed Grand Island, Neb., I’d lost count.

What was it? At first, it looked like it could be a replacement for the Swords of Qādisīyah — that giant crossed-blades sculpture in central Baghdad.

And then, the aha: It was a propeller blade for a wind turbine, a really big one.

I’ve seen plenty of wind farms, but I’d never seen the blades being transported for construction. Last week, I saw a lot of them.

Why? Because they were on the road, and so was I. My eight-year-old daughter and I were on a summer adventure. We drove more than 2,000 miles from Washington, D.C., to, eventually, Steamboat Springs, Colo. (Don’t worry, I did most of the highway driving.)

Something about seeing all those turbine propellers made me think of wartime mobilization, like FDR’s ramp-up during the Lend-Lease period or Josef Stalin’s decision to send Soviet heavy industry east of the Urals.

The comparison isn’t completely daft, either. The notion that we should move to a war footing on energy has been a reigning cliché of U.S. politics ever since Jimmy Carter’s Oval Office energy crisis address in 1977. “This difficult effort will be the ‘moral equivalent of war’ — except that we will be uniting our efforts to build and not to destroy.”

Ever since, we’ve been hearing that green must become the new red, white, and blue.

It’s difficult to catalogue all of the problems with this nonsense. For starters, the mission keeps changing. Is the green-energy revolution about energy independence? Or is it about fighting global warming? Or is it about jobs?

For most of the last few years, the White House and its supporters have been saying it’s about all three. But that’s never been true. If we wanted energy independence (and I’m not sure why we would) or if we wanted to reduce our dependence on Middle Eastern oil (a marginally better proposition, given that Canada and often Mexico supply the U.S. with more oil than Saudi Arabia), we would massively expand our domestic drilling for oil and gas and our use of coal or carbon-free nuclear. That would also create lots of jobs that can’t be exported (you can’t drill for American oil in China, but we can, and do, buy lots of Chinese-made solar panels).

As for the windfall in green jobs, that has always been a con job.

For instance, Barack Obama came into office insisting that Spain was beating the U.S. in the rush for green jobs. Never mind that in Spain — where unemployment is now at 21 percent — the green-jobs boom has been a bust. One major 2009 study by researchers at King Juan Carlos University found that the country destroyed 2.2 jobs in other industries for every green job it created, and the Spanish government has spent more than half a million euros for each green job created since 2000. Wind-industry jobs cost a cool 1 million euros apiece.

The record in America has been no better, Obama’s campaign stump speeches notwithstanding. The New York Times, which has been touting the green agenda in its news pages for years, admitted last week that “federal and state efforts to stimulate creation of green jobs have largely failed, government records show.” Even Obama’s former green-jobs czar concedes the point, as do other leading Democrats, including Rep. Maxine Waters of Los Angeles.

Perhaps the most pathetic part of the war to green America is how unwarlike it really is. The New York Times also reported that California’s “weatherization program was initially delayed for seven months while the federal Department of Labor determined prevailing wage standards for the industry,” a direct sop to labor unions. And afterward, the inflated costs made the program too expensive for homeowners.

Green jobs, like shovel-ready jobs, proved a myth in no small part because President Obama is eager to talk as if this green stuff were the moral equivalent of war, but he’s not willing or able to do things a real war requires.

— Jonah Goldberg is editor-at-large of National Review Online and a visiting fellow at the American Enterprise Institute. You can write to him by e-mail at JonahsColumn@aol.com, or via Twitter @JonahNRO. © 2011 Tribune Media Services, Inc.
Posted by jtf at 6:05 AM