Western culture has changed, and Islamic culture can, too. 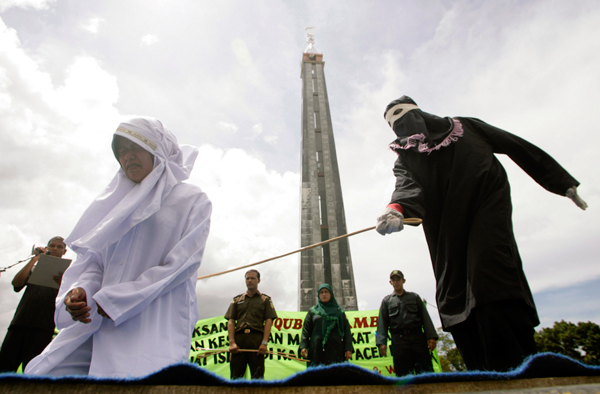 Murni Amris, an Acehnese woman, is caned as part of her sentence in the courtyard of a mosque in Aceh Besar district, Indonesia's Aceh province October 1, 2010. Murni received three strokes of the cane for opening food stalls during the fasting month of Ramadan. Aceh is the only province in Indonesia, the world's most populous Muslim country, where Islamic law is implemented. REUTERS/Tarmizy Harva
Liberty must always be exercised, and may only be maintained, “in a way of subjection to authority.” This sounds like it could have been written by Jean-Jacques Rousseau, the trailblazer of the modern Left, whose “social compact” decreed that any dissenter from “the general will” would be compelled to obey — meaning “nothing less than that he will be forced to be free.” Or it could be the handiwork of any of a thousand Muslim jurisprudents teaching that submission to Allah and His law is the essence of Islam.
But it is neither. Those are the words of John Winthrop, the legendary founder of the Massachusetts Bay Colony and the man Paul Johnson, the peerless British historian, calls “the first great American.”

As Johnson recounts in A History of the American People, on July 3, 1645, Winthrop delivered a speech on the tension between order and liberty. His conception of the latter was, by our standards, bracingly narrow and circumscribed by religious duty. “It is of the same kind of liberty whereof Christ hath made us free.” In Winthrop’s view, “if you stand for your natural, corrupt liberties, and will do what is good in your own eyes, you will not endure the least weight of authority. . . . But if you will be satisfied to enjoy such civil and lawful liberties, such as Christ allows you, then you will quietly and cheerfully submit under that authority which is set over you . . . for your good.”

I’ve been involved in that thinking for a few years now. For me, the subject has two objectives for non-Muslim Americans. First, sharia is a useful barometer for distinguishing real Muslim moderates from Islamists. The latter seek to undermine American liberties, but some have been able to pose as moderates, because they do not employ terrorist tactics in the pursuit of their extreme ends.

Second, focusing on sharia is the most promising strategy for empowering authentic moderate Muslims. Sharia, as classically construed by authoritative scholars, is strewn with tenets that run counter to Western principles of liberty — in the areas of freedom of conscience, equality, free expression, economic liberty, the settlement of policy disputes without violence, what “cruel and unusual punishments” should be unacceptable, and so on.

This comparison between Western and Islamic cultures is not perfect. To begin with, there is no universally accepted version of sharia. But that is a cause for optimism: It yields hope that a credible construction of sharia could develop that both embraces Western principles and marginalizes the fundamentalist interpretation. On this score, much of the criticism against those of us who focus on sharia is misplaced.

Naysayers claim that we’ve got sharia wrong, that it doesn’t really exist at all outside the realm of private spiritual guidance, or that various overlooked nuances complicate or nullify such categorical claims as that apostasy from Islam is a capital offense under sharia.

But these criticisms are fundamentally flawed. It’s absurd to insist that sharia is merely some airy, aspirational set of guidelines, when it is actually enforced as the law of several countries. And I’m confident that, whatever nuances there may be in Islam’s rich jurisprudential history, there is a classical consensus on what sharia holds; Reliance of the Traveller: A Classical Manual of Islamic Sacred Law, for example, is readily accessible and has been certified as accurate by al-Azhar University, as well as by the governments of several Muslim countries. But all that is beside the point. I’ve never claimed the authority to say what is or is not the true sharia or the true Islam. What matters is that the interpretation of sharia that rejects Western principles is a credible interpretation adhered to by a substantial percentage of the world’s Muslims — substantial enough to be considered mainstream. Whether they are right or wrong is irrelevant; they believe it, and many are willing to act on it, to our considerable detriment.

The hope, of course, is that between Muslim reformers who embrace our liberty culture, and the millions of Muslims who are peaceful, moderate people regardless of what their scriptures may literally command, alternative constructions of sharia will eventually discredit and marginalize the Islamist interpretation. It is a tough row to hoe, given the intellectual firepower and tradition that supports treatises like Reliance of the Traveller. But it is not impossible.

And that brings us back to the comparison between Western and Islamic cultures. The lack of consensus about Muslim law is not the only thing that makes the comparison imperfect. There’s also the fact that I’d have been more accurate saying “contemporary Western culture.” Whatever ideas we have about liberty today, we have not always had them. And I am not talking about the Dark Ages, either.
One cannot read Johnson, in the context of our sharia contretemps, without being startled by America’s founding. Winthrop’s beliefs about the need for submission to God’s authority in civil life were widely shared. Nathaniel Ward, a pastor in the colony, sounded positively jihadist: “I dare aver that God does nowhere in his world tolerate Christian states to give toleration to such adversaries of His truth, if they have the power in their hands to suppress them.” Winthrop, Johnson recounts, ran the colony as “a theocracy.” Government was based on God’s law, loyalty oaths were mandatory, Sabbath observance was strictly enforced, and brutal corporal punishments were carried out: Philip Radcliffe, for example, was whipped and had both ears cut off for “invectives against our church and government.” Others were executed, usually by hanging, for what, in effect, was the preaching of novel religious doctrines.

Nor would we today recognize the original Virginia settlements as consonant with what we think of as our way of life. In Jamestown, too, religious duty blended seamlessly with civil law. We need not belabor the centrality of slavery to the developing agricultural economy. But for a time, a bachelor in Virginia was permitted to purchase a wife from among the young, unmarried women sent from England in order to make the colony more attractive. The price was 125 pounds of tobacco.

The objective here is not to argue moral relativism, as in, “Who are we to condemn sharia with the skeletons we’ve got in our closet?” What I am suggesting is that we go about our righteous business without righteous indignation. A little humility is in order — and I need to remember that, too, just as much as I need to say it.

Cultures are dynamic. They change drastically over time. There are grounds for concern that Islam’s will have a harder time evolving — the blights on our history are rooted in human failure to apply Judeo-Christian doctrine, not in the doctrine itself. Islam’s problems are more about Islam than about Muslims. Still, our society evolved and flourished because of our religious principles, not in spite of them.

It took a very long time to find the right balance between the sacred and the secular, and there is good reason to believe that our most serious problems today are caused by too much suppression of faith, not too little. But Islam has to be given a fair chance to strike this balance. We can’t tolerate jihadist atrocities, and we must fight Islamist efforts to erode our freedoms. But it will not do to smirk and say that Muslims have already had 14 centuries to get it together. How would we have done under that test?

We have had to come a very long way to arrive at what we are rightly proud to call Western culture and American civil liberties. Our current battle is about preserving that inheritance for ourselves and making sure the Muslims in America who want it are free to have it. In factoring sharia into that battle, we need to be as humble as we are forceful.

— Andrew C. McCarthy, a senior fellow at the National Review Institute, is the author, most recently, of The Grand Jihad: How Islam and the Left Sabotage America.
Posted by jtf at 7:21 AM