Politicized and abusive unions were deadly during the blizzard. 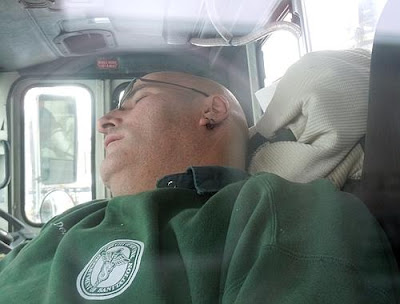 Instead of plowing the streets, this driver was caught snoozing Monday morning from 9:30 to at least 11 on 14th Avenue near 149th Street. (New York Post)

Come rain or shine, wind, sleet, or blizzard, Big Labor leaders always demonstrate perfect power-grabby timing when it comes to shafting taxpayers. Public-sector unions are all-weather vultures ready, willing, and able to put special-interest politics above the citizenry’s health, wealth, and safety. Confirming rumors that have fired up the frozen metropolis, the New York Post reported Thursday that government sanitation and transportation workers were ordered by union supervisors to oversee a deliberate slowdown of its cleanup program — and to boost their overtime paychecks.

Why such vindictiveness? It’s a cold-blooded temper tantrum against the city’s long-overdue efforts to trim layers of union fat and move toward a more efficient, cost-effective privatized workforce.

Welcome to the Great Snowmageddon Snit Fit of 2010.

New York City councilman Dan Halloran (R., Queens) told the Post that several brave whistleblowers confessed to him that they “were told (by supervisors) to take off routes (and) not do the plowing of some of the major arteries in a timely manner. They were told to make the mayor pay for the layoffs, the reductions in rank for the supervisors, shrinking the rolls of the rank-and-file.”

Denials and recriminations are flying like snowballs. But even as they scoff at reports of this outrageous organized job action, the city sanitation-managers’ unions openly acknowledge their grievances and “resentment” over job cuts. Stunningly, sanitation workers spilled the beans on how city plowers raised blades “unusually high” (which requires extra passes to get their work done) and refused to plow anything other than assigned streets (even if it meant leaving behind clogged routes to get to their blocks). 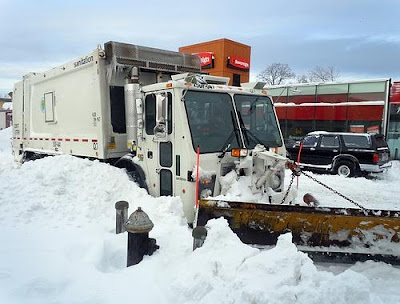 A Sanitation Department spokesman would not comment until he saw the pictures, and he did not answer questions about the agency's sleeping-in-the-truck policy.(New York Post)

When they weren’t sitting on their backsides, city plowers were caught on videotape maniacally destroying parked vehicles in a futile display of Kabuki Emergency Theater. It would be laugh-out-loud comedy if not for the death of at least one newborn whose parents waited for an ambulance that never came because of snowed-in streets.

This isn’t a triumphant victory for social justice and workers’ dignity. This is terrifying criminal negligence.

And we’re not alone. As the Mackinac Center for Public Policy in Michigan reported: “The largest study ever conducted on outsourced garbage collection, conducted by the federal government in the 1970s, reported 29 to 37 percent savings in cities with populations over 50,000. A 1994 study by the Reason Foundation discovered that the city of Los Angeles was paying about 30 percent more for garbage collection than its surrounding suburbs, in which private waste haulers were employed. A 1982 study of city garbage collection in Canada discovered an astonishing 50 percent average savings as a result of privatization.”

Completely privatized trash collection means city residents don’t get socked with the bill for fraudulently engineered overtime pay, inflated pensions, and gold-plated health benefits in perpetuity — not to mention the capital and operating costs of vehicles and equipment. The Colorado Springs model, as city councilman Sean Paige calls it, is a blueprint for how every city can cope with budget adversity while freeing itself from thuggish union threats when contracts expire or cuts are made. Those who dawdled on privatization efforts in better times are suffering dire, deadly consequences now.

Let the snow-choked streets of New York be a lesson for the rest of the nation: It’s time to put the Big Chill on Big Labor–run municipal services.

— Michelle Malkin is the author of Culture of Corruption: Obama and His Team of Tax Cheats, Crooks & Cronies. © 2010 Creators Syndicate, Inc.
Posted by jtf at 11:27 AM