THE first time you see Christian Bale in “The Fighter,” you might gasp. He’s playing a true-life broken-down ex-boxer, Dicky Eklund, and he’s sitting on an ugly sofa wearing acid-washed jeans, a half-buttoned shirt, a glaze of oily sweat and not an ounce of fat. With his hunched shoulders and sunken eyes he looks caved in, almost collapsed. The life starts to seep back in when he begins talking, but when he loosely swats the air, his fingers remain splayed as if they had forgotten how to curl into fists. As the words keep coming, so does the life, and soon those hands are coiled hard, jabbing the air and knocking down ghosts. 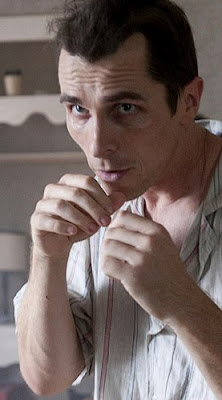 In "The Fighter," directed by David O. Russell, Christian Bale, above, portrays Dicky Eklund, an ex-boxer and drug addict, and half-brother to the title character, played by Mark Wahlberg.

Directed by David O. Russell, “The Fighter” centers on Mr. Eklund’s younger half brother, Micky Ward (Mark Wahlberg), a junior welterweight. For much of the film, which begins in 1993, a tamped-down Micky flails in the shadow of his louder, showier brother who is also his trainer, their differences partly conveyed through the contrasting performances of the actors playing them. With his naturalistic delivery and relaxed animal physicality Mr. Wahlberg doesn’t seem to be acting, while a twitchy, jumpy Mr. Bale all but pinwheels off the screen. Mr. Wahlberg’s acting seems more a matter of being, while Mr. Bale’s appears self-consciously performed. Each explores a life lived on and off the stage of the ring, but in Mr. Bale’s deep-tissue turn as an addict, the tragedy of a life is wholly embodied.

When next you gasp at Mr. Bale, it will likely be because of his performance’s outrageous comedy, no small thing given Dicky’s desperate straits. Straight from the onetime mill town of Lowell, Mass., the real Mr. Eklund took to fighting jockeys when he was 12. He married at 16; was a father by 17. By 20 he had lost his most famous fight, an inglorious 1978 slugfest with Sugar Ray Leonard during which Mr. Leonard, after tripping over one of Mr. Eklund’s legs, fell to the canvas, and Mr. Eklund coolly stepped over his opponent’s upturned face. It was a brief victory lap: the next time Mr. Eklund showed up on HBO, he was smoking rock in the 1995 documentary “High on Crack Street: Lost Lives in Lowell.”

You see high points and low from that 1978 fight throughout “The Fighter,” including in a crack-house scene seven and a half minutes from the start. “Sugar Ray might have some trouble tonight,” an announcer warns — while back in the film Dicky’s bobble head lurches in and out of the frame. Eyes fixed, Dicky looks as if he’s shadowboxing in a room filled with the haze of 1,001 crack hits. As Dicky moves back, as if in retreat, his head and fists dart in and out of the frame as his harsh breathing keeps time with his hands. He then pauses, closes his eyes and gently leans forward and back as if summoning a dream — or about to nod out — while an announcer describes the long-ago Dicky as “a young man who can punch.”

This reverie comes to an abrupt end when Mr. Russell cuts to Dicky’s friend and comrade in crack, Boo Boo (Paul Campbell), who stands slack jawed and still, as if waiting for his next directorial cue. The image of the gaping Boo Boo is comic and somewhat absurd, but Mr. Russell pushes the moment into darker realms by joining it to an audio clip of one of the 1978 fight announcers declaring that the boxers are physically well matched. Mr. Russell cuts back to Dicky, now slightly farther away from the camera. Dicky and Boo Boo continue throwing punches that don’t land, a pitiful burlesque that Mr. Russell cross-cuts with clips from the Leonard-Eklund match, a juxtaposition that makes the crack-house scene more pathetic.

By connecting the 1978 fight and its drug-addled mirror image, Mr. Russell immediately conveys what Dicky lost, literally and in every other way, and the glory he yet clings to. Even in the crack house he remains the champ, though now he has to play that part, which he does habitually and with exaggerated and often self-parodic flair. Such role playing evokes a truism from Jerry Stahl — a writer and former addict (heroin, coke, you name it), known for his memoir, “Permanent Midnight,” and novels like “I, Fatty” — who observed that “all junkies are inherently actors because they have been scamming so long.” As Dicky, Mr. Bale wears the haunted face of the actor-scammer, with darting eyes and dissembling flamboyance.

Back at the crack house, after Dicky’s dreamy timeout, Mr. Russell cuts to a medium shot of Boo Boo pretending to pummel Dicky in the stomach, the faked blows accompanied by the hard, somewhat hollow, body-on-body thumps of landed punches. Dicky is no longer in retreat but neither is he fighting back. Instead, with his arms bent and hands up in the brawler’s come-hither (whaddya got?) stance, Dicky begins to steadily advance toward Boo Boo while uttering a short succession of animalistic “gwahs.” In an uneasily funny few seconds Mr. Bale and Mr. Russell bring to life both Dicky the pugilist and Dicky the scrapper, the guy who in and out of the ring didn’t just get into trouble, he also came right at it.

Dicky’s crack-house braggadocio comes to a climax with Boo Boo hitting the ground as if from a blow, the moment intercut with the 1978 fight. Mr. Russell crops the real bout so you can’t see that Mr. Leonard tripped, a cheat that preserves Dicky’s misremembered triumph. He thrusts his arms in the air and again steps over a fallen man. A few cuts later Dicky is bending into the frame toward his reward, the camera following him as he — and the shot — lean toward a waiting crack pipe. But just before he draws in the smoke, Mr. Bale does something extraordinary: He drains the animation from his face and turns his buggy eyes into fathomless pits, revealing the death mask beneath Dicky’s wild pantomime of life.

In one minute of screen time Mr. Bale, ably assisted by his director, the cinematographer and editor, has replayed the entire tragic sweep of Dicky’s life, with its bruising knockdown fights and addictively crippling highs. Right then someone reminds Dicky that he’s supposed to be training Micky at the gym. The camera swoops in for a close-up of Dicky’s comically startled face as he yells “What?,” the tight, drumlike skin punctuated by the dark O of his mouth. And then Dicky is off and running down Lowell’s brightly sunny mean streets. As his loose arms and legs spin in circles, he looks a little like the Road Runner, though more like a fugitive clown. He’s a riot, that Dicky, and he’s running for his life.