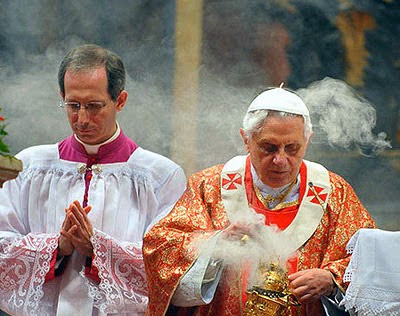 While it is hard to explain to outsiders, one of the most fascinating battles in the American Catholic church today is the one that pits the kneelers vs. the non-kneelers. I refer, of course, to the issue of whether bishops should — bowing to the modernization of ancient rites — attempt to prevent the faithful from kneeling before the altar as they receive Holy Communion during the Mass.

Let me explain: If people are allowed to kneel, that would mean that the Latin Mass is coming back and the next thing you know the pope will be seeking draconian student-life codes on Catholic campuses that prevent student funds from being used for activities that directly attack Catholic doctrine. It would be like the reforms of the Second Vatican Council never happened (or the spirit of the council has been quenched or something like that). Horrors. Then again, I am Eastern Orthodox, so I am biased.

This liturgical war is the subject that looms behind this fascinating, but consistently shallow, Washington Post piece that ran under the headline, “Pope’s master of liturgy helps Benedict restore traditions.” [1]

The battle ground? The sights, sounds, smells and rubrics of the rites celebrated by the man who sites in the throne of St. Peter. Why does this matter? Change the words and the rites and you eventually change the doctrines. Both Marinis know that. Using the most loaded of images, the Post even suggests that the young liturgist is, with this pope, attempting a “counter-reformation.” Is that with our without a large “R”?

Here’s a sample of the warfare:

Since the Marini II era began in October 2007, the papal Masses clearly have a stronger traditional element. Guido Marini, who has degrees in canon and civil law and a doctorate in the psychology of communication, caused considerable consternation among some progressive Catholics in January when he talked to English-speaking priests about a “reform of the reform.”

In an interview Thursday, he argued that the changes should not be seen as a liturgical backlash to modernity but as a “harmonious development” in a “continuum” that takes full advantage of the church’s rich history and is not subject to what he has called “sporadic modifications.” Liturgical progressives, like Bishop Donald Trautman of Erie, Pa., are concerned that Marini considers the reforms of the 1960s ecumenical council known as Vatican II as being among those sporadic modifications.

At most papal Masses, a large crucifix flanked by tall candles is now displayed on the altar, even though many progressives say the ornaments block the view of the priest and the bread and wine. They argue that this obstructs the accessibility urged by liturgical reforms associated with the Second Vatican Council. Marini responds by saying that the crucifix reminds the faithful of who is really front and center in the Mass. He also says that the pope cannot sit in front of the altar when it bears the crucifix because “the pope can’t give his back” to sacraments on the altar.

What is NOT here is the crucial third level of the drama. The story demonstrates that a battle is going on and even gives a few insights into what the battle is about. What is missing? That would be voices on the left or the right (but mainly the right) who can explain what the symbols represent. Readers are not allowed to listen to the doctrinal debates that add substance to the symbols.

In other words, what do these liturgical changes MEAN? Why are these fights packed with so much substance and emotion? Take this passage for example:

Piero Marini, who stepped down in 2007 after serving as the master of celebrations for 20 years, has championed the Vatican II reforms, including the simplification of rites that he believes facilitates active participation.

In the name of “inculturation,” or integrating church rites with local customs, the silver-haired Marini in 1998 accepted the request of local bishops to allow a troupe of scantily clad Pacific islanders in St. Peter’s Basilica to honor the pope with a dance during the opening liturgy of the Synod for Oceania. During John Paul II’s visit to Mexico City in 2002, Marini likewise granted a local bishop’s wish to let an indigenous Mexican shaman exorcise the pope during a Mass there.

Now that is a quick glimpse of true substance, a window into the third layer of the issues addressed in this news report.

Note: A practitioner of another religion — Catholic, polytheistic or some fusion of the two? — is allowed to exorcise demons from the pope, during a Mass. The Post flies right by this. Where are the voices that interpret the meaning of this extraordinary moment? Which divine power is casting out evil forces from the leader of the Catholic faith?

Methinks that the discussions behind closed Vatican doors about the theology built into that act probably lasted for more than a few moments. This was not idol chatter.

This is a great subject for a story. It contains many details linked to topics that are genuinely newsworthy. But where is the substance, other than the old theme that nasty people locked into the past still want to crush the brave voices of the new?