Will the Glastonbury Thorn Survive? 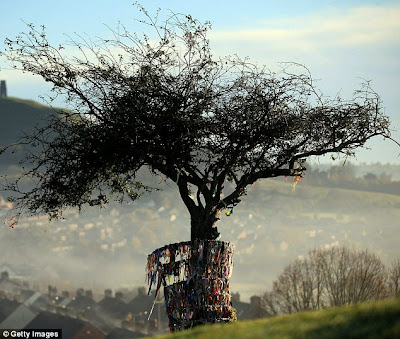 The Glastonbury Thorn Tree before it was hacked apart. Legend says it sprang from the staff of Joseph of Arimathea, the man who helped Jesus of the cross. To the right of the tree, in the distance, is Glastonbury Tor

The other week in Britain the Glastonbury Thorn Tree was destroyed by persons unknown.[1] It was a scrubby, undistinguished-looking tree. Few trees have had such links with high religious mystery.

It is said to be in its origins 2,000 years old and to have direct links with Christ. According to legend it is either sprung from the Crown of Thorns or from seeds planted by Joseph of Arimathea, who, according to the Gospel, gave his tomb to hold Christ's body.

In fact it is historically possibly, if not particularly likely, that Joseph of Arimathea visited England. Archeological evidence shows that England had considerable trade with Europe before being absorbed into the Roman Empire after 43 A.D. and travel in the Roman World was relatively easy.

Although the story of Joseph of Arimathea is encrusted with legends, he is described by St. Mark as an "honorable counselor" in Judea and may have been a wealthy merchant.

Whether or not there is any truth in any of the many legends that have grown about the tree is in a sense unimportant. It has been at the very least a place of contemplation.

The important fact is that the Glastonbury Thorn, like Glastonbury itself (Glastonbury Abbey is one reputed burial-place of King Arthur), has been a focus for Christian beliefs in England since ancient times. It had, over the centuries, become a site of pilgrimage, and a cutting from the tree was sent to the Queen to decorate her Christmas dinner table every year.

Glastonbury is also a seat of the legend of the Holy Grail. Many have remarked on a feeling of uncanniness about it.

The thorn tree is said to have flowered on Christmas Day every year for the last two millennia.

G. K. Chesterton, in "The Ballad of the White Horse," telling of Alfred the Great's defense against the marauding and destroying Viking barbarians, referred to:

The Earls of the Great Army
That no men born could tire,
Whose flames anear him or aloof
Took hold of towers and walls of proof,
Fire over Glastonbury roof
And out on Ely, fire …

The fires of the Great Army
That was made of iron men,
Whose lights of sacrilege and scorn
Ran around England red as morn,
Fire over Glastonbury Thorn--
Fire out on Ely Fen. 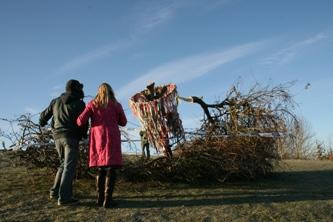 The destruction of the tree may have been mindless vandalism or a deliberate attack on a symbol of, and aid to, Christian faith -- and there are plenty of anti-Christian fanatics in Britain today (when both convicts and police, as well as members of the remaining armed forces, are, in the name of political correctness, given time off to observe pagan rituals). Or possibly the target was British history and identity, which has been under attack from many quarters, including official ones, in recent times.

Whoever did it went to a good deal of trouble because the tree was protected by a wire fence. Further, the fact that the destruction took place on December 8 suggests those responsible were well aware of the significance of the tree. This has traditionally been the date on which a sprig was cut from it to present to the Queen.

Whatever the motive behind the destruction was, if the tree is lost then something at the core of Western civilization has been diminished. In "The Ballad of the White Horse," Alfred, looking at the senseless destruction and waste caused by the barbarians, tells them:

Therefore your end is on you,
Is on you and your kings,
Not for a fire in Ely fen,
Not that your gods are nine or ten,
But because it is only Christian men
Guard even heathen things.

The branches were sawn off the tree and piled nearby but a six-foot stump remains. There is apparently some hope the tree may be saved. Tree-surgeons have dressed the tree's wounds in pine resin and beeswax and it has been wrapped up to protect it from the frost.

Arborist Peter Wood Frearson was quoted as saying: "I am 75 per cent sure the tree will survive."[2]

Religious fanatics have attacked the tree previously, but it has proved very hard to kill. During the English Civil War Oliver Cromwell's Puritan Roundheads felled the tree. However locals salvaged the roots of the original tree, hiding them in secret locations around Glastonbury.

Various shoots of it were raised and tended over several centuries and it was replanted on the hill in 1951.

Many people have been distressed by the destruction of the tree. However in "The Ballad of the White Horse" Chesterton had Alfred give an answer to the barbarians' destruction:

For our God hath blessed creation,
Calling it good. I know
The spirit with whom you blindly band
Hath blessed destruction with his hand;
Yet by God's death the stars still stand
And the small apples grow.

And, after all, he did win the final battle.

[2] http://www.thisissomerset.co.uk/news/Holy-Thorn-survive-desecration-says-expert/article-3013745-detail/article.html
Posted by jtf at 8:58 AM