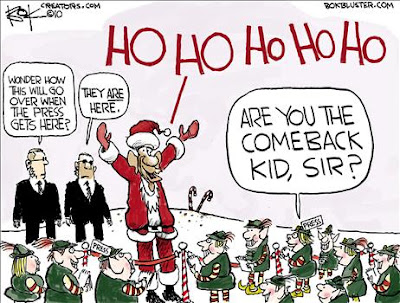 Riding the lamest of ducks, President Obama just won the Triple Crown. He fulfilled (1) his most important economic priority, passage of Stimulus II, a.k.a. the tax cut deal (the perfect pre-re-election fiscal sugar high - the piper gets paid in 2013 and beyond); (2) his most important social policy objective, repeal of "don't ask, don't tell"; and (3) his most cherished (achievable) foreign policy goal, ratification of the New START treaty with Russia.

Politically, these are all synergistic. The bipartisan nature of the tax deal instantly repositioned Obama back to the center. And just when conventional wisdom decided the deal had caused irreparable alienation from his liberal base, Obama almost immediately won it back - by delivering one of the gay rights movement's most elusive and coveted breakthroughs.

The symbolism of the don't ask, don't tell repeal cannot be underestimated. It's not just that for the civil rights community, it represents a long-awaited extension of the historic arc - first blacks, then women, now gays. It was also Obama decisively transcending the triangulated trimming of Bill Clinton, who instituted don't ask, don't tell in the first place. Even more subtly and understatedly, the repeal represents the taming of the most conservative of the nation's institutions, the military, by a movement historically among the most avant-garde. Whatever your views, that is a cultural landmark.

Then came START, which was important for Obama not just because of the dearth of foreign policy achievements these past two years but because treaties, especially grand-sounding treaties on strategic arms, carry the aura of presidential authority and diplomatic mastery.

No matter how useless they are, or even how damaging. New START was significantly, if subtly, damaging, which made the rear-guard Republican opposition it engendered so salutary. The debate it sparked garnered the treaty more attention than it would have otherwise and thus gave Obama a larger PR victory. But that debate also amplified the major flaw in the treaty - the gratuitous reestablishment of the link between offensive and defensive weaponry.

One of the great achievements of the past decade was the Bush administration's severing of that link - first, by its withdrawal from the ABM Treaty, which had expressly prevented major advances in missile defense, and then with the 2002 Treaty of Moscow, which regulated offensive weapons but ostentatiously contained not a single word about any connection to missile defense. Why is this important? Because missile defense is essential for protecting ourselves from the most menacing threat of the coming century - nuclear hyper-proliferation.

The relinking that we acquiesced to in the preamble to New START is a major reversal of that achievement. Sure, Obama sought to reassure critics with his letter to the Senate promising unimpeded development of our European missile defense system. But the Russians have already watched this president cancel our painstakingly planned Polish and Czech missile defenses in response to Russian protests and threats. That's why they insisted we formally acknowledge an "interrelationship" between offense and defense. They know that their threat to withdraw from START, if the United States were to build defenses that displease them, will inevitably color - and restrain - future U.S. missile defense advances and deployments.

Obama's difficulty in overcoming the missile defense objection will serve to temper the rest of his nuclear agenda, including U.S. entry into the test-ban treaty, and place Obama's ultimate goal of total nuclear disarmament blessedly out of reach. Conservatives can thus take solace that their vigorous opposition to START is likely to prevent further disarmament mischief down the road. But what they cannot deny is the political boost the treaty's ratification gives Obama today, a mere seven weeks after his Election Day debacle.

The great liberal ascendancy of 2008, destined to last 40 years (predicted James Carville), lasted less than two. Yet, the great Republican ascendancy of 2010 lasted less than two months. Republicans will enter the 112th Congress with larger numbers but no longer with the wind - the overwhelming Nov. 2 repudiation of Obama's social-democratic agenda - at their backs.

"Harry Reid has eaten our lunch," said Sen. Lindsey Graham, lamenting his side's "capitulation" in the lame-duck session. Yes, but it was less Harry than Barry. Obama came back with a vengeance. His string of lame-duck successes is a singular political achievement. Because of it, the epic battles of the 112th Congress begin on what would have seemed impossible just one month ago - a level playing field.

letters@charleskrauthammer.com
Posted by jtf at 12:53 PM