Has there been a more polarizing artist in the last 10 years than Ryan Adams? Maybe so, but the little-dynamo-that-could still riles critics up with his one-man assault on the outer bounds of prolific creativity. Releasing III/IV, the second double-record set with his band the Cardinals, Adams continues to challenge his muse with this solid but too long-by-half collection. 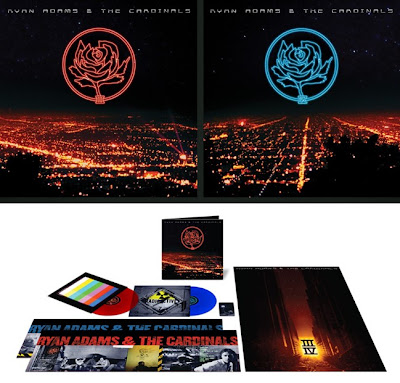 These 21 songs come directly out of the NYC Electric Ladyland studio, Easy Tiger sessions from 2007. He had so many leftover cuts that he’s been unloading them in bunches since then. This is his second release in the last 12 months; the first was Orion, an underpublicized project described as his “sci-fi, metal concept record.” III/IV comes out on Adams’ own label, Pax-Am Records, who modestly call it a “double-album concept rock opera about the ‘80s, ninjas, cigarettes, sex, and pizza.” Why not?

The great thing about Adams and his inconsistent but ample output is you never know what will ricochet out of his studio next. He pinballs between genres, whether alt-country, garage rock, or new wave-style pop-rock, in always entertaining if uneven ways. He can be fun to follow, and it pays off every few records—his last great set was 2005’s Cold Roses, a raggedy, but twang-tight, jam-guitar drenched double-album with the Cardinals, inspired by Jerry Garcia.

III/IV verves off in another direction, a crunchy distillation of guitar pop and lite-metal sheen complete with Adams’ freewheeling attitude. His crucial touchstone influence here are his buddies, the Strokes, with whom he shares a love of British ‘80s New Wave shot through with NYC’s grit and grind-you-up streets. This set definitely ranges in the mold of his earlier Rock N Roll, a record that temporarily put his roots-country sound in check.

“Breakdown into the Resolve”, the fiery opener, pushes us straight into this record’s catchy dynamics: Both Adams’ and Neil Casal’s brash guitars lead the Cardinals with streamlined hooks intact, and then the verse peels open as Adams welcomes us back into the fold with his greeting, “Hi, hello, it’s me again, don’t worry I’ll talk slow / So you probably heard / I went away, where do we start?”

Though Adams never goes away for long, he has been on hiatus lately following his marriage last year to the actress, Mandy Moore. All signs point to another fertile period, though, as he has scheduled several new releases coming up in the next year. But, however, we choose to classify this guy, there’s no denying his songwriting DNA gift, and the livewire rush that runs through some of his music.

The songs just pile up here on III/IV, ranging from the clever synth riffs of “Happy Birthday” to the muscular power pop glaze of “Wasteland” and “Users.” Adams tries out different vocals here too; on one song he echoes the mopey theatrics of Morrissey, one of his idols, and on the next he’s giving us a decent Bono impression. All of this bodes well, if that’s what you look for on an Adams’ record. Though often, Adams’ weakness lies in the fact that he’s such a musical chameleon that much of his music reminds us of other artists, and sometimes he suffers in the comparison. I find this to be less true with his country records, which more than capably stand on their own compared to his more derivative rock releases.

If this is a concept record, there’s no narrative that connects the songs besides the overall sound. I couldn’t find the “ninjas, sex, and pizza” here so much, but the 1980s’ influence bleeds through the tracks. He even references “Star Wars” in a clunky, throwaway rocker named after the movie, as he yearns for a girl he can love as much as his favorite film. Let’s call it sci-fi, geek rock; at least he left the godforsaken Star Trek franchise alone—Adams projecting Spock would be one alien too far.

As with many double records, the first disc is stronger than the second, which dissipates into mediocre genre exercise writing like “Icebreaker”, an annoying metal rehash, and “Numbers”, a thrashed out concoction, and numerous others. Since these are leftovers culled from Adams’ overflow, maybe we should expect some lesser efforts along the way. The second disc winds down with a lovely, loping ballad, unfortunately named “Death and Rats”, just for good measure.

This always leads to the question, why release so much material? Why not whittle this down to one stronger package? And, of course, these concerns always dog the obsessive Adams with almost every record. It depends what you want as a fan: Songwriting quality or quantity? At his best—say every three or four records, Ryan Adams offers both. The rest of the time Adams is clearing the decks, making way for the next inspiration, and letting us hear about it. He is a songwriter, after all; this is what he does.