I'm hoping our new album sounds like a dream but it has been hard, admits Glasvegas frontman James Allan 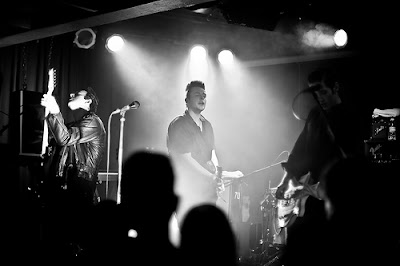 GLASVEGAS are planning to come back bigger, better and stronger than ever, according to frontman James Allan.

But the Scots singer, who caused a scare when he failed to show up at the Mercury Music Awards earlier this year, admits he struggled to deal with the way his band were catapulted to stardom.

After hits such as Daddy's Gone and Geraldine from their self-titled 2008 debut album, the 31-year-old endured a period of soul searching.

He admitted: "I don't know where hell ends and heaven begins. We've been pulled inside out.

"I am quite a resilient person then I fall down.

"I had some kind of ... it was like I was chasing parked cars. Sometimes it is so easy for me to say I am partying. So it's a little more complex.

"It's not just putting my feet up and having a good time.

"Sometime I am trying to make sense of my life and sometimes I feel I'm a stranger to myself.

"Along the way, there are certain things that aren't good for you, that catch up with you.

"I'm not just talking drugs and alcohol or any other cartoon cliches of a rock 'n' roll person. There are other less subtle things that aren't advertised in the rock 'n' roll comic book."

According to James, the madness of being in Glasvegas took its toll on the other members. None more so than drummer Caroline McKay, who quit in March.

James, 31, said: "There are probably lots of reasons why Caroline left. It is quite a tall order being in a band.

"When we started, we practiced and practiced. We didn't just spark up a cigar.

"But Caroline had never played drums before and it grew from my sister saying, 'I'll get you a gig', to something much bigger in such a short period of time.

"Caroline never asked to play gigs at Wembley with U2. In some ways, I feel responsible for that."

James insists his own emotional breakdown took place during the last days of a tour with Kings Of Leon, six months before Caroline quit.

Having been gifted two goldfish on his 30th birthday by his sister and band manager, Denise Allan, he became strangley attached to the newly acquired pets.

"The last two years have been crazy," James recalled. "The tour with Kings Of Leon came to a shuddering halt. We had to cancel the last few days.

"The last thing I remember was being given two black goldfish by Denise. It was my birthday.

"I took the fish to the zoo and I was singing The Carpenters' (They Long To Be) Close To You to the fish 33 floors up in a Chicago hotel.

"I even took the fish into the bar. I remember sitting on the edge of the bed in my bathrobe with the fish in the tank on my lap, flicking through all the TV channels. God knows what happened after that."

Explaining his decision to turn down the Mercury Music Prize last February, he added: "I got invited to the Mercury awards and one of my friends asked me to go and meet them in Central Park, New York. I chose Central Park."

The last time we spoke, James had been set on emigrating to Los Angeles. But he changed his mind when he got there.

"My initial instinct had been that I felt at home in Los Angeles. But I wasn't sure if my instincts had been right," James recalled.

"So we went to different places, including Venice beach, Silverlake and Hollywood. At the end of 12 days, I thought my instincts had been wrong.

"Then Denise suggested Santa Monica. We got there and I had never felt any more at home. I said, 'This is it.' "We took a walk along the beach, saw a house with a To Let sign, called the estate agent and did the deal.

"We took some microphones over, set up some nice amps and came back with about 20 songs."

The next step was to find a producer. The Glasgow rockers chose Flood, best known for his work with U2 and Depeche Mode, and the recordings were completed at his Assault & Battery studios in London.

In the process of recording the as-yet-untitled album, the band also found a replacement drummer for Caroline.

Swede Jonna Löfgren will join the band on their January tour of Scotland which takes in Orkney, Wick, Oban, Dunoon, Troon, Hawick and Dunfermline.

Lead guitarist Rab Allan said: "Jonna is beautiful. She has been working with us for the past couple of weeks. She is a good drummer and stands up when she drums.

James added: "I was speaking to Jonna and saying how funny it was that she was from Sweden.

"I found out that Rab had told the record label that he didn't want a drummer unless it was a girl and she was from Sweden.

"Rab is quite cocky and so clumsy. When she turned up, I just thought what a genius Rab was.

"I am so proud of my cousin for that. It is early days and it's like a new girlfriend. I just want to take things slowly and make sure that she is having fun and she's OK.

"She is pretty and there is electricity dripping off her when she is playing."

Unlike Caroline, Jonna has been drumming from an early age.

"I started playing drums when I was three," she said. "I took the pots and pans from the kitchen and started banging on them.

"I've been taking lessons since I was seven. I am trained and my style is different."

The album, due for release in March, is currently being mixed by Claudius Mittendorfer, who has worked with Muse, Franz Ferdinand and Arctic Monkeys.

"This has been one of the hardest points of my life - sometimes I am trying to work out if I am losing my mind," James confessed.

"I am trying to prove to people I don't have OCD. I really need to believe in myself and believe that I'm not a maniac and the sound will work out in the end.

"Somebody asked what I wanted the album to sound like. I said, a dream. So I'm sure over the next week, it'll be wrapped up. I have to cross my fingers and hope it works out. I'm hoping for the best and that the stars align."

Email ThisBlogThis!Share to TwitterShare to FacebookShare to Pinterest
Labels: Glasvegas