Massachusetts Sen. John Kerry is frustrated. He recently spoke to the Greater Boston Chamber of Commerce and complained that we are in "a period of know-nothingism in the country, where truth and science and facts don't weigh in. It's all short-order, lowest common denominator, cheap-seat politics." He'd really like to elect a new people.

Now, that last bit -- cheap-seat politics -- is the kicker. How truly awful it must be for the Senate's richest man -- wealthier than the Senate's Rockefeller -- to have to put up with those of us in the cheap seats. Brahmins from Boston have been complaining about democracy since Thomas Jefferson was elected. And that Andrew Jackson fellow -- talk about the cheap seats running things! When he was elected, mobs of frontiersmen -- wild and woolly -- descended on Washington. They nearly crushed the Hero of New Orleans in the mob scene at the White House reception on Inauguration Day, 1829. Bostonian John Q. Adams had left the White House that morning, unwilling to witness the triumph of the cheap seats. 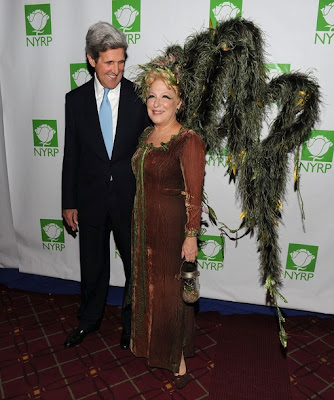 Kerry was most gracious in addressing the Greater Boston Chamber of Commerce, speaking in person to an audience that was not sitting in the cheap seats. The frosty aristocrat spends a lot of his time on the deck of his yacht -- moored in Rhode Island to avoid the sky-high taxes that Kerry's liberal friends impose on the cheap seat folks in Massachusetts.

Kerry was particularly incensed that his yeoman work on the Cap and Trade legislation had collapsed in the Senate. The House passed this unwisest of bills earlier this year. Many members of the House were forced to walk that plank by their leadership. Many of those who voted for Cap and Trade may not be returned next Tuesday. They will be especially vulnerable if their constituents mine coal, drill for oil, or manufacture anything at all.

Cap and Trade has been called an invitation to massive corruption by Britain's former Chancellor of the Exchequer, Lord Lawson. Now, someone who sits in the House of Lords can hardly be accused of squatting down in one of those cheap seats Kerry despises. Lord Lawson says if you really want to deal with carbon emissions, tax carbon emissions. And give tax credits to the poor so they can cope. That's not my preferred option, but it's not Kerry's, either.

This is the reason why Europeans -- those smarter folks Kerry likes more than he likes our "know-nothing" voters -- teasingly call the Greens watermelons: green on the outside, red on the inside.

Are we against science and truth merely because we object to Kerry's Cap and Trade legislation? Bjorn Lomborg, the famed "Skeptical Environmentalist," has said Cap and Trade is the worst way to go about dealing with Global Warming.

Even if we imposed Cap and Trade, with all of its ability to straightjacket the already paralyzed economy, Lomborg says it would result in barely a 1-degree difference in Global Warming by the end of this century.

Now, Lomborg agrees with Kerry that Global Warming is occurring. He agrees that it is a problem. And he agrees that some of all of it is man-caused. But he has produced a new documentary called "Cool It," urging his fellow environmentalists to cool the rhetoric about Global Warming as an existential threat to the planet.

Lomborg's thesis is subject to a lot of reasoned debate. You can tell Lomborg is liberal. One, he's a Dane. Two, he calls the earth the planet. Only liberals call it the planet.

When John Kerry says we've abandoned science and truth, we can only ask: If the truth was so compelling, why did the environmentalists at the University of East Anglia's Climate Research Unit have to perform their usual "tricks" to "hide the decline"?

The funniest part of Kerry's anguished cry is his complaint that Rush Limbaugh and Glenn Beck are responsible for this rise in what he calls "know nothingism." If you add all of Rush's listeners -- and they are legion -- to all of Glenn Beck's viewers, you still don't come close to the tens of millions of voters who are expected tomorrow to render a verdict on Kerry liberalism.

So why doesn't Kerry start his own TV show or go on radio? Why do you think Al Franken escaped from his sinking Hot Air America gig and snuck into the Senate on a disputed vote? It's a lot easier to bloviate in the Senate than to attract and hold an audience. The only reason Kerry and Franken are sitting in the Senate is that its seats are not the cheaper seats.

Ken Blackwell is a former U.S. ambassador to the United Nations Human Rights Commission and a senior fellow at the Family Research Council.
Posted by jtf at 6:39 AM