A little more than 30 years ago, the guitarist for the E Street Band was producing the Iron City Houserockers "Have a Good Time, But Get Out Alive" in New York City. He thought his bandleader, Bruce Springsteen, might find common ground with the scruffy group of musicians from Pittsburgh whose primal rock 'n' roll was comparable to that of the New Jersey-based band.

That first meeting, Joe Grushecky recalls, however brief, was a portent of things to come.

"I can't speak for (Springsteen), but there was a bond that was easy and pretty instant as far as the writing and music went," Grushecky says. 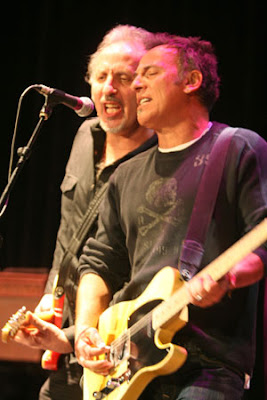 Grushecky and Springsteen, appearing Thursday and Friday at Soldiers & Sailors Memorial Hall & Museum in Oakland, are commemorating the 15th anniversary of "American Babylon," an album that Springsteen produced and performed on with Grushecky's band. But they also are celebrating something more basic: two friends who not only enjoy performing together, but each other's company.

"Joe and Bruce seem to be kindred spirits," says Chris Phillips, the editor of Backstreets, a magazine and website (www.backstreets.com) devoted to all things Springsteen.

Noting that Grushecky's lack of success in comparison to Springsteen is not due to the quality of his work, but more of a "random fluke," Phillips says "seeing these two guys coming from a similar place, really enjoying each other's work and each other's company, has been inspiring to me in a lot of ways."

Phillips notes that Springsteen has long been generous with praise for fellow artists, including Marah, Jesse Malin, Gaslight Anthem and Grushecky. But while that draws attention to music that might not get heard in some quarters, some fans are inherently suspicious of anyone who is linked to Springsteen.

"These artists want to stand on their own," Phillips says. "With Springsteen's rabid following, a thumbs up or a pat on the back can be seen by some fans as riding on his coattails. They want to be seen as great songwriters, great performers in their own right."

Grushecky certainly has made his own mark, although on a much smaller scale than Springsteen. He's garnered critical acclaim for his recordings, and is popular in Europe, particularly in Spain, Italy and Germany.

Still, Grushecky's music occasionally is considered an offshoot, a mere tributary of Springsteen's music. While there are similarities -- both men's music is hewn from the basic, primal stuff of rock 'n' roll that can be traced back to Chuck Berry and Jerry Lee Lewis, and then was refined by The Who and The Rolling Stones in the 1960s -- Grushecky's music stands alone by virtue of its simplicity. While Springsteen's sound broadened and took on aspects of a grand, quasi-religious experience, Grushecky has remained true to his roots.

"We're a bunch of bar-band guys from Pittsburgh," Grushecky says of the Houserockers. "Early on in our career, Art (Nardini, Grushecky's long-time bassist) and I decided we wanted to play. We didn't want to go weeks or months or years between gigs so we could draw a bigger crowd in Pittsburgh. In retrospect, I don't know if that was a good thing or not."

By 1995, Grushecky admits his career had reached a nadir. While his creative juices still flowed and he still loved to perform -- "I'm a lifer," he says -- there seemed to be less interest in his work. Then came Springsteen's offer to work on what would become "American Babylon," the album that features some of Grushecky's best songs, including "Dark and Bloody Ground" and "Homestead."

After the album was released, Springsteen agreed to go on tour with the band.

"For us to have an international superstar like Bruce, who is as big as big can be, come out and play in the bars with us was almost unheard of," Grushecky says. "The shows were intense and brought a lot of attention back on us. We had a pretty good run with that record, got to go to Europe and do a lot of things we weren't able to do in awhile because we were just sort of treading water with record companies.

"It gave us a different perspective on how to do business. We grew up a bit. We got a little bit smarter. We were able to take 'American Babylon' and craft the career we do have out of that record."

While Springsteen's presence undoubtedly assisted Grushecky and the Houserockers, Phillips thinks there were mutual benefits. He remembers the excitement that tour generated, how being able to see Springsteen in a club setting was a rare gift for fans.

"I think a lot of people have great memories of 15 years ago and 'American Babylon' when Bruce hit the road as an honorary Houserocker," Phillips says. "Clearly, Bruce was enjoying what he was doing, not being the frontman, not being the bandleader. It was an unusual position for him, for sure."

The announcement that Bruce Springsteen was coming to Pittsburgh to perform with Joe Grushecky was news not only in Western Pennsylvania. The concerts have excited Springsteen fans around the country and the world, especially since he's not touring this year with the E Street Band.

If Springsteen fans want to see him perform this year, the shows tonight and Friday at Soldiers & Sailors Memorial Hall & Museum in Oakland are their only chance.

"I personally know people who are coming from Europe to these shows," says Chris Phillips, the editor of Backstreets, a magazine and website (www.backstreets.com) devoted to Springsteen's music. "Anytime Springsteen plays, it's big news for us. ... These one-off shows are clearly getting a lot of attention during a year when he's not doing any shows.

Grushecky has heard from friends in Spain and Switzerland who are coming to Pittsburgh for the concerts. But this is nothing new. After "American Babylon" was released in 1995, it was not unusual for European fans to come to Pittsburgh to take in a Houserockers' show.

"One night, a guy from Norway came to see us play at a bar in Uniontown," Grushecky says. "There were people coming from Spain, coming from France and Switzerland. This isn't the first time this has happened."