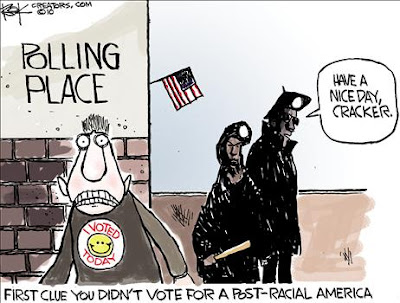 Responding to these vile charges, conservative television pundits think it's a great comeback to say: "There is the fringe on both sides."

Both sides? Really? How about: "That's a despicable lie"? Did that occur to you simpering morons as a possible reply to the slanderous claim that conservatives are fiery racists?

All the accusations of "racism" at anti-Obama rallies so far have turned out to be completely false. The most notorious was the allegation that one black congressman was spat on and another called the N-word 15 times at an anti-ObamaCare rally on Capitol Hill last March.

The particularly sensitive Rep. Emmanuel Cleaver, D-Mo., perhaps walking too closely to a protester chanting "Kill the Bill," was hit with some spittle -- and briefly thought he was a Freedom Rider! When observers contested Cleaver's account -- with massive video evidence -- he walked back his claim of being spat upon.

The slanderous claim that a protester called the civil rights hero John Lewis the N-word 15 times was an outrageous lie -- never made by Lewis himself -- but promoted endlessly by teary-eyed reporters, most of whom cannot count to 15.

The media never retracted it, even after the N-word allegation was proved false with a still-uncollected $100,000 reward for two seconds of video proof taken from a protest crawling with video cameras and reporters hungry for an act of racism.

When St. Louis Tea Party co-founder Dana Loesch did make the point on CNN that no one spat on any black congressmen at the anti-ObamaCare rally, a liberal on the panel, Nancy Giles, told her to "shut your mouth," while alleged "comedian" Stephanie Miller repeatedly called Tea Party activists "tea baggers."

It's like watching Hitler hysterically denounce Poland for being mean to Nazi Germany while Polish TV commentators defend Poland by saying, "There are mistakes on both sides."

Meanwhile, we do have video proof of the New Black Panthers standing outside a polling station in Philadelphia in 2008 with billy clubs threatening white voters who tried to vote. And there is video footage of Sarah Palin, Karl Rove, Condoleezza Rice as well as a slew of conservative college speakers being assaulted by crazed liberals.

We also have evidence of liberals' proclivity for violence in the form of mountains of arrest records. Liberal protesters at the 2008 Republican National Convention were arrested for smashing police cars, slashing tires, breaking store windows, and for possessing Molotov cocktails, napalm bombs and assorted firearms. (If only they could muster up that kind of fighting spirit on foreign battlefields.)

There were no arrests of conservatives at the Democratic National Convention.

Over the past couple of election cycles, Bush and McCain election headquarters around the country have been repeatedly vandalized, ransacked, burglarized and shot at (by staunch gun-control advocates, no doubt); Bush and McCain campaign signs have been torched; and Republican campaign volunteers have been physically attacked.

In the fall of 2008, Obama supporters Mace'd elderly volunteers in a McCain campaign office in Galax, Va. In separate attacks, a half-dozen liberals threw Molotov cocktails at McCain signs on families' front yards in and around Portland, Ore. One Obama supporter broke a McCain sign being held by a small middle-aged woman in midtown Manhattan before hitting her in the face with the stick. These are just a few acts of violence from the left too numerous to catalog.

There were arrests in all these cases. There was, however, absolutely no national coverage of the attacks by Obama supporters.

Obama is in danger from the Tea Partiers! The Poles are mobilizing on the border!

Since Obama became president, the only recorded violence at Tea Parties or Town Halls has been committed by liberals. Last fall, a conservative had his finger bitten off by a man from a MoveOn.org crowd in Thousand Oaks, Calif. Two Service Employees International Union thugs have been charged with beating up an African-American selling anti-Obama bumper stickers at a St. Louis Tea Party in August 2009.

Respected elder statesmen of the Democratic Party have referred to Obama's "Negro dialect" (Harry Reid), said he would be getting them coffee a few years ago (Bill Clinton), and called him "clean" (Joe Biden). And that's not including the former Ku Klux Klan Democratic senator, the late Bob Byrd.

So I'm thinking that maybe when conservatives are called racists on TV, instead of saying, "There are fringe elements on both sides," conservative commentators might want to think about saying, "That is a complete lie."

Liberals explode in rage when we accuse them of being unpatriotic based on 50 years of treasonous behavior. They have zero examples of conservative racism, but the best our spokesmen can think to say when accused of racism is: "Man is imperfect."

Conservatives who prefer to come across on TV as wonderfully moderate than to speak the truth should find another line of work and stop defaming conservatives with their "both sides" pabulum.

I hear BP is looking for a new spokesman.