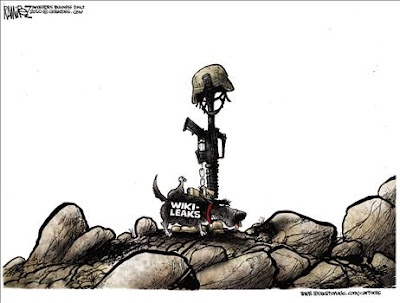 If we needed yet another example of Washington's self-absorption, we sure got it with the WikiLeaks dump of classified data on AfPak.

Government officials promptly freaked about the political consequences. The rush to insist that "there's nothing new here" and that the leaks "really don't change anything" was dishonest even by DC standards.

The victims of this tragic event aren't punch-drunk White House staffers or members of Congress up for re-election. They're not the wed-to-Pakistan wonks at State or even the Pentagon's hide-the-bad-news generals.

The forgotten victims are our troops on the ground. And the Afghans who've risked everything to help them.

If I hear one more senator from either party tell us that the WikiLeaks betrayal won't make a significant difference, I'm going to violate security to puke on the Capitol's steps.

No difference? These leaked documents are an immeasurably valuable gift to the Taliban and al Qaeda -- as well as to other enemies, present and potential.

American service members will die because of the WikiLeaks "service to humanity." And nobody in Washington seems to have noticed.

Afghans will die, too. A lot of them. In just a few hours of data-mining, Britain's The Times unearthed the names of hundreds of Afghans who've helped us. Information about their families and home villages is in there, too.

Think the Taliban will give a free pass to Afghans who've supported us? Hundreds, perhaps thousands, of Afghan lives are newly at risk. It's a huge gift to the terrorists: Our collaborators will run for cover -- and recruiting informants will be immeasurably more difficult.

Thanks to WikiLeaks -- and the treasonous leaker himself -- our enemies will gain a more-detailed picture of how we operate than we'll ever have of them. There hasn't been a bigger war-time intelligence coup since ULTRA, when the Brits got their hands on the key Nazi encryption device in World War II.

And what troubles Washington? The administration, which blithely assured voters it knew how to fix Afghanistan, is worried about eroding poll numbers. Congressional Democrats tied to the president's AfPak policies to prove their toughness on national security are panicked about voter backlash.

Republicans, who bluster about a mission they haven't defined, worry that truth will lessen support for the war. State fears diplomatic repercussions, and the Pentagon's been caught cheating on its AfPak midterm. The

dry up, since we obviously can't protect our secrets.

Yet how many voices raised concerns about the increased danger to which our troops will be exposed? Precious few.

The bad, horrible, terrible news is that the WikiLeaks drama is still in its opening act. As enemies and journalists (not so concerned about our troops, either) dig through these vast files, the revelations are going to get worse.

Of course, our government lawyers wouldn't let us take WikiLeaks down. We won't even go after Mr. WikiLeaks, Julian Assange, whose release of this data will facilitate Taliban war crimes and assassinations.

Folks, don't be bamboozled: This leak is the biggest geo-strategic event in the short history of the Internet, potentially altering the course of a war and changing the dynamics of an entire region. No Web-publicized political scandal, no breathless war-crime allegations, not even those old pictures of your girlfriend that popped up on shamelesskittens.com come close.

What can we do, now that the terrorists have downloaded the data? We could get a grip on the harsh new realities of war in the age of the Web. But we won't. It's too hard. It upsets too many rice bowls.

Our leaders can't even be honest about the damage done. And the troops get screwed again.

Ralph Peters' latest book is "Endless War."
Posted by jtf at 6:37 AM