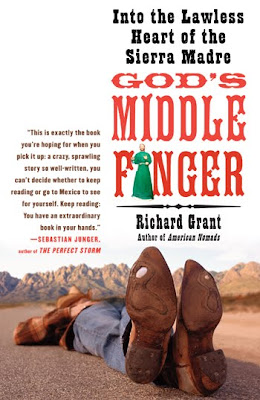 Into the Lawless Heart Of the Sierra Madre

This intriguing and ultimately terrifying Mexican walkabout belongs to that subgenre of travel writing that can generally be summed up in four words: Should have stayed home.

It's the author's first job to persuade us why he didn't, and in the initial chapters of God's Middle Finger, Richard Grant does not quite succeed. Something about a sad divorce, a taste for risk and a desire to see the Sierra Madre, the mythical but quite lawless mountain range that forms the backbone of western Mexico.

Rugged, impoverished and all but closed to outsiders, the Sierra Madre is indeed a fine place to hide buried treasure -- or to grow marijuana and opium poppies, while murdering anyone who tries to stand in your way. The rule of law is literally a distant rumor in the Sierra Madre, where the nearest police station can be a day's drive away (and the police in question are likely corrupt). Most murders and nearly all rapes go unreported; the locals simply sort things out among themselves.

Grant, a British journalist, spends a lot of time on how-I-got-the-story, but not enough on why. "Are you looking for your death?" he is asked by a folk healer. It seems a fair question, for at the outset the author comes across smelling like a bit of an adrenaline tourist, slumming for thrills. "Here I was at last, riding an outlaw trail into the high wilds of the Sierra Madre," he declares, having arrived in the fabled mountains and feeling smug; not long afterward, he's whipping out a hunk of Italian prosciutto.

Thankfully for the reader, Grant's self-satisfaction soon withers, replaced by a genuine fascination with this isolated, violent place. He describes a small-town festival that manages to be "a solemn religious celebration, a drunken party, a social occasion, and a flea market, all rolled into one."

"Behind his tented stall," he writes, "I saw one of the vendors dip a long thin knife into a plastic bag full of white powder, administer a parakeet-blast to both nostrils and then step up to relieve his partner. 'Se¿ores y se¿oras!' he bellowed. 'I now present to you a most exquisite item of the finest quality at a price that is not to be believed! I have no boss, I have no wife, I have no children, my friends say I have lost my mind! Maybe that is why I can offer you a price of one hundred -- NO! Eighty! -- NO! Seventy! -- NO! Fifty pesos is all I ask for this beautiful, hard-wearing set of saucepans.' "

The festival is crawling with a more sinister type of character: The narcos, both real and wannabe, the former distinguished only by the heft of their gold jewelry. The narcos run everything in the Sierra Madre, which is the headwaters of the drug supply stream. In the hardscrabble mountain villages, marijuana is known as the crop that pays, and pretty much everyone grows it.

That he navigates this dangerous land safely (for the most part) is a testament to his drinking abilities -- and his thoroughgoing command of Mexican curses. ("Sons of obscene perpetrations!" is how he translates a standard Sierra Madre toast.) In one fascinating scene after another, he meets peasant marijuana farmers, very many drunks and a few Mormons and Mennonites, who fled south for various political and religious reasons. He spends time with the indigenous Tarahumara and memorably attends an Easter festival in a Tarahumara town that descends into total madness, fueled by the local corn-brewed beer, tesguino. (The local statue depicting God is missing all but one of its fingers; hence the book's title.)

But not until about page 200 do we encounter anything like a larger point: in this case, the utter futility of the war on drugs and the hypocrisy of waging it against suppliers rather than consumers. The impoverished farmer who grows marijuana is merely responding to market forces, as any good American capitalist would.

It's not a message we really want to hear, up in El Norte. When Grant volunteers to teach English in a local schoolhouse, he has his students compose a letter to their American peers, describing their lives. He shows the letter to teachers in Tucson, but they decline to use it in their classes because of the references to pistols and pot. Better to build a border fence and pretend that this Mexico doesn't exist. When an American expat activist expresses the hope that Mexico is headed toward a liberal-democratic future, Grant is doubtful: "I thought the whole nation was turning more feral, violent, and chaotic, that the Sierra Madre held glimpses of Mexico's future as well as its past."

A strong editor might have moved this up and turned it into the book's controlling thesis, but Grant is more of a rambling sort of writer, one who keeps pushing the limits. Not to give away the ending, but I think I can sum things up in six words instead of four: He got what he came for.

-- Bill Gifford is the author of "Ledyard: In Search of the First American Explorer."
Posted by jtf at 3:29 PM