K Street influence peddlers routinely meet with Team Obama — outside the White House, in an effort to circumvent the public’s right to know.

President Obama is finally uniting the Left and the Right — in joint opposition to his administration’s chronic sabotage of transparency and public-disclosure rules. It won’t be long before liberals disillusioned by Dear Leader’s reveal-as-we-say-not-as-we-conceal policies link arms with me and join in on my two-year-old chant: Obama lied, transparency died. 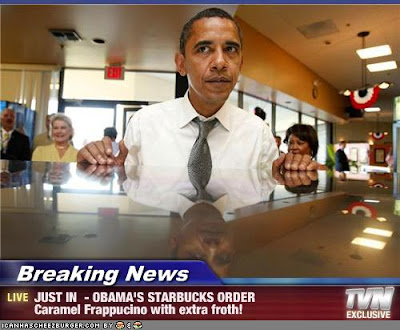 Watchdog groups and Republicans on Capitol Hill want an investigation into hundreds of White House meetings with corporate lobbyists at D.C. coffee houses. K Street influence peddlers told the New York Times last week that they’ve met routinely with Team Obama officials over the past 18 months to discuss policy matters — at Starbucks, Caribou Coffee, even on a side lawn — with the express purpose of circumventing the public’s right to know.

The Coffee House Ruse comes on top of the latest confession of White House non-disclosure from ex–Big Labor heavy Patrick Gaspard, Obama’s chief domestic policy adviser, who failed to report a $40,000 pension payment from his old employer, the Service Employees International Union in New York. If they keep this up, sunlight-avoiding Obama officials will soon be cast as the next Twilight vampires.

“Lobbyists say some White House officials will agree to an initial meeting with a lobbyist and his client at the White House,” the Times’s once-zealous champions of Obama reported, “but then plan follow-up sessions at a site not subject to the visitors’ log.” Said one financial lobbyist who has met more than a half-dozen times off-campus with White House officials: “I’ll call and say, ‘I want to talk to you about X,’ and they’ll say, ‘Sure, let’s talk at Starbucks.’”

In addition to carving out the coffee-house loophole and using personal e-mail accounts to communicate with the influence industry, White House officials have been advising lobbyists looking for administration jobs to de-register — shedding their K Street status — to get around Obama’s vaunted lobbyist hiring ban. With more than 40 ex-lobbyists working in the administration, Obama’s no-lobbyists executive order already has more holes in it than a moth-eaten crocheted sweater.

The self-puffery of the double-talker-in-chief on disclosure ethics is inversely proportional to the amount of real transparency he has delivered. In January, irked by criticism of private health-care meetings with Big Labor cronies at the Oval Office, Obama lectured Americans that “it is important to know that the promises we made about increased transparency we’ve executed here in 1600 Pennsylvania Avenue.” His legal counsel trumpeted the release of more than 25,000 White House visitor logs (many incomplete, vague, and useless) as “a milestone in the president’s commitment to change Washington. The president believes that this and our many other transparency initiatives promote accountability and keep American democracy vital.”

While Obama’s cabinet engaged in the same old precedented meetings with lobbyists, his propagandists patted themselves on the back for providing unprecedented access:

“We are excited about the visitor records policy not only because we are breaking new ground for this administration but also because we are establishing a new standard for all future administrations. We know of no comparable initiative in the history of the White House.”

Puff, puff, puff. The Obama administration’s incomparable hype and hypocrisy have at last proved too much for good-government liberals. Washington-based Citizens for Responsibility and Ethics in Washington (CREW) has asked the House Committee on Oversight and Government Reform to investigate and hold hearings on the Coffee House loophole. CREW head Melanie Sloan lambasted the Democratic White House: “This is what all the administration’s anti-lobbyist rhetoric gets you — less transparency. Rather than being open and clear about who is influencing White House policy, the White House is trying to hide who it’s really talking to. Even worse, the public is being suckered with lofty rhetoric about the evils of the same lobbyists White House officials are meeting with.”

Now that citizen activists are staking out D.C. caffeine hot spots, the White House/special-interest trysts may soon be headed to Washington street-corner hot-dog stands and taquerias. Keep your eyes and ears open. The next cap-and-tax exemption or stimulus slush fund may be hammered out in a public restroom stall or on a Metro subway seat next to you. On the upside, coffee-gate is rousing slow-learning Americans from their Obama-as-Messiah stupor. The best part of waking up is reality in your cup.

— Michelle Malkin is the author of Culture of Corruption: Obama and His Team of Tax Cheats, Crooks & Cronies. © 2010 Creators Syndicate, Inc.
Posted by jtf at 5:47 AM