Supreme Court nominee Elena Kagan denied editing critical language in a memo on partial-birth abortion during her tenure as a Clinton White House aide in order to distort the medical need for the procedure.

The denial came during her final day of questioning before the Senate Judiciary Committee considering her confirmation, but it did not satisfy Republican Sen. Orrin Hatch of Utah.

“I'm really stunned by what appears to be a real politicization of science,” Hatch said. “The political objective of keeping partial-birth abortion legal appears to have trumped what a medical organization originally wrote and left to its own scientific inquiry they had concluded.” 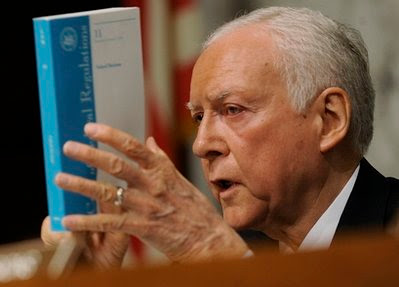 Kagan told the panel she recalled discussing the rewrite for the American College of Obstetricians and Gynecologists (ACOG) and sought to better explain their positions on the controversial procedure, but that she did not change their medical opinion in the process.

“There is no way I would have or could have intervened with ACOG to get it to change its medical views on the question,” Kagan said.

In a Dec. 14, 1996 White House memo obtained by the committee, Kagan wrote they had just discovered that the ACOG “is thinking about issuing a statement that a select panel convened by the organization ‘could identify no circumstances’ for which partial-birth abortion “would be the only option to save the life or preserve the health of the woman.”

“This, of course, would be a disaster,” Kagan wrote.

Kagan told the Senate committee that she had conversations with ACOG “about whether that statement was consistent with the views that we knew it had” which was that “it was, in some circumstances, the medically most appropriate procedure.”

The new language for the statement appeared to state the opposite, that partial-birth abortion "may be the best or most appropriate procedure in a particular circumstance to save the life or preserve the health of a woman.”

The key language was used verbatim by the nonpartisan physicians' organization, and proved persuasive when the Supreme Court struck down Stenberg v. Carhart, a state ban on partial-birth abortion.

Congress twice passed a ban on the procedure and both times Clinton vetoed the legislation.

Hatch called the rewrite a “politically useful spin” on a “particularly gruesome abortion method”concerning whether the procedure was medically necessary.

“Your language played an enormous role in both legal and political fights over banning partial-birth abortion,” Hatch said.

Kagan faced nearly 20 hours of questioning this week from the panel, which concluded her portion of the confirmation process Wednesday night so members on Thursday could attend memorial services for Sen. Robert Byrd.

The panel then met in closed session to discuss the findings of her FBI background check.

The committee will hear from more than two-dozen witnesses beginning late Thursday afternoon, including scholars and a Harvard professor where Kagan served as dean of the law school.

Other scheduled witnesses include Tony Perkins, president of the Family Research Council, and Charmaine Yoest, president of Americans United for Life.

Yoest is expected to urge senators to ask Kagan “why she thought it was appropriate to interfere in the positions of medical organizations.”

“We are deeply concerned about Elena Kagan’s conflicting testimony today before the Senate Judiciary Committee,” Yoest said in a statement.

“There are serious discrepancies between her statements to Senator Hatch and the documented evidence of her actions in December 1996,” Yoest said.


Audrey Hudson is an award-winning investigative journalist who specializes in homeland security.
Posted by jtf at 6:12 AM