For over three decades, from the early 1950s to the 1980s, William F. Buckley Jr. commanded the conservative intellectual universe.

He was articulate, charming, witty and ubiquitous. He founded the most influential conservative magazine, National Review, wrote a (thrice) weekly column, hosted arguably the most riveting television political talk show in history, Firing Line, and made thousands of media appearances and speeches. Along the way, he published over 50 books that included collections of essays, political and sailing memoirs, memoirs of great leaders or events, novels and, just for the fun of it, a children’s book and a play.

He was diminished finally (and only marginally) in the 1980s by the emergence of an intellectual and political progeny that he himself sired, all of them — including Reagan, Will and Limbaugh — oriented to one degree or another in the direction of the great man of Stamford.

What, then, does Bill Buckley have left to teach us? 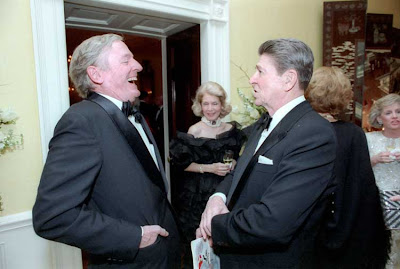 Quite a lot, it happens. Roger Kimball, an editor of the New Criterion, and Linda Bridges, Buckley’s long-time editor and assistant, have brought to fruition a new book, Athwart History: Half A Century of Polemics, Animadversions, and Illuminations. Kimball informs readers in the introduction that half of the pieces gathered in this substantive collection have never appeared in book form previously — which is remarkable given that Buckley published at least ten collections of his nonfiction work, including essays, speeches, correspondence and appreciations.

Athwart History, then, is an impressive enterprise. It provides readers a glimpse of Buckley performing as the virtuoso man of political letters. We see Buckley the ideologue, the anti-communist, the free enterprise crusader; we also see Buckley the man of faith, the devoted friend, the logician, the keen observer of events, all ideology and political allegiances aside.

This is the most impressive book by Buckley since his speeches were collected a decade ago in Let Us Talk of Many Things. Both remind us that conservative ideas thoughtfully presented are compelling because they appeal to eternal verities — faith, hope, liberty.

The editors spent a year culling through Buckley’s gargantuan collection of papers and writings, a daunting undertaking. Consider that his son Christopher, at Buckley’s memorial service, suggested that Buckley’s Yale papers– if stacked — would reach as high as the St. Patrick’s Cathedral spire, a fitting observation if one recalls Buckley’s heavenly aspirations.

Kimball and Bridges have done an admirable job of including an eclectic array of work here: excerpts from previously published books, well known essays and appreciations, and columns otherwise lost to the archives. But even here they have chosen a slightly unorthodox approach. Take the excerpt from Up from Liberalism. The most famous words from this book, and perhaps the most important, are Buckley’s summation of the conservative manifesto of his time – that he would not willingly cede more power to the state, to big corporations or to any other form of collectivity. But Kimball and Bridges have chosen a different section to present, one that is perhaps less eloquent, but more analytical as Buckley dissects the failed logic of the modern worldview.

Conservatism must insist that while the will of man is limited in what it can do, it can do enough to make over the face of the world; and that the question that must always be before us is: What shape should the world take, given modern realities? How can technology hope to invalidate conservatism? Freedom, individuality, the sense of community, the sanctity of the family, the supremacy of the conscience, the spiritual view of life—can these verities be transmuted by the advent of tractors and adding machines? These have had a smashing social effect upon us, to be sure. They have created a vortex into which we are being drawn as if irresistibly; but that, surely, is because the principles by which we might have made anchor have not been used, not because of their insufficiency or proven inadaptability.

Buckley’s anti-communist writings are powerful, for he rarely appeals to crude polemics or hyperventilating rhetoric. Buckley is an idealist, and he is motivated by a compelling vision — that the individual has worth and that any state system that crushes the individual crushes, ultimately, a child of God. Communism crushed people with as great an efficiency as any political system in history — including fascism. Hitler’s reign, destructive and nasty as it was, would last just over a decade. The communist reign of terror — from its heartland of Soviet Russia and Eastern Europe to Africa and Asia lasted much longer and consumed, with nary a protest from much of the left-wing intellectual community, tens of millions of individuals.

Buckley found this appalling and he convinced others that it was appalling at a time when the killing fields went barely noticed by many of our most respected and esteemed intellectuals and public figures. Buckley did notice and he refused to be silent:

Karl Marx was a genius, an uncannily resourceful manipulator of world history who shoved everything he knew, thought, and devised into a Ouija board from whose movements he decocted universal laws. He had his following, during the late phases of the Industrial Revolution. But he was discredited by historical experience longer ago than the Wizard of Oz: and still, great grown people sit around, declare themselves to be Marxists, and make excuses for Gulag and Afghanistan.

Anti-communism and anti-materialism are just two of the themes to emerge from the collection. We are also reminded that Buckley was a forceful opponent of the state and those of us who remember his emergence as an elder statesman might forget the fury with which he could dismiss the statist enterprise. Most people are not drawn to public service by high ideals, he suggested, but by power.

“Power. That is the great aphrodisiac,” he wrote. And he concluded, in a 1993 column, “our governments are, for the most part, the enemy. The government, John Adams wrote, `turns every contingency into an excuse for enhancing power in itself.’ That was almost two hundred years ago. How right he was. Our enemy, the state.”

This is strong stuff that might make even a tea party advocate blush, but it is a reminder in the age of Obama that to choose conservatism is stand athwart history as it has unfolded, to choose the prerogatives of the individual over the gravitational pull of a collective mindset, a mindset that inevitably narrows the corridors of freedom and opportunity by aggregating disproportionate power to the state.

This being said, one cannot take this column in isolation. Buckley also directed his ire toward the private sphere as well, and this is equally relevant given the excesses to which Wall Street and Corporate America have been prone in recent years. In his publisher’s statement upon the launch of National Review, Buckley reminded readers that:

Radical conservatives in this country have an interesting time of it, for when they are not being suppressed or mutilated by the liberals, they are being ignored or humiliated by a great many of those of the well-fed Right, whose ignorance and amorality have never been exaggerated for the same reason that one cannot exaggerate infinity.

This is a vast collection – some 600 pages with a table of contents seemingly as long as some books. Much of the content focuses on the issues of the given day – presidential elections, political or cultural events, glosses on this or that personality or friend. We revisit Buckley’s tributes to Grace Kelly, Malcolm Muggeridge, Russell Kirk, Frank Meyer and John Dos Passos, not to mention his long-time adversary and friend John Kenneth Galbraith and his wife, whose death left Buckley so bereft. There are other efforts worth noting – his skewering of the leftists who sought to kill National Review in the cradle, Reflections on the Failure of National Review to Live Up to Liberal Expectations, his attempts to defend his faith in an age of secular cynicism, and his love of classical music and sailing.

Indeed, this “omnibus,” to use the editors’ phrase, is a larger than any collection Buckley himself ever put into print. Which leads me to my one criticism — I would not have minded a few less of his workmanlike columns, and the inclusion of a few more of his most memorable pieces – essays on Whittaker Chambers, Lourdes, Gore Vidal and Murray Kempton come to mind.

But, one must concede there is methodology behind this choice: think of Athwart History not as a reader, but the third in a series that includes Miles Gone By, a collection of personal essays and remembrances, and speeches. It is evident that the editors wanted to memorialize work that might otherwise disappear from view – and to reprint only his best writings would have been an act of repetition, so much of this work having already appeared in earlier books. And so Kimball and Bridges sought to balance objectives, I suspect, wanting to unearth some of Buckley’s less remembered but still highly readable pieces while also doing justice to his style and history by including a few of his trenchant and memorable essays.

Whatever the merits of this approach, this collection announces what is obvious to any student of modern politics: Buckley made conservatism a formidable political and intellectual force in part through intellect and in large measure through sheer force of personality and faith. This comes through in his writings, of course, but to read Buckley profitably requires a committed and thoughtful mind — of which, I fear, there are fewer and fewer in our superficial age of television and instant communication.

But if a picture is worth a few hundred thousand words, let us turn, then, finally, to the beginning of the book, the cover, to see the man in full. The photo selected is perfect – Chairman Bill on his sailboat, an individual fully alive and undaunted by all the variations and challenges of life. Even those unfamiliar with Buckley or the movement he mobilized and inspired will be curious, I suspect, about the man behind the smile, for the face and smile alone tell us profound things: that the individual lives, that living joyfully and faithfully carries rewards greater than all the academic and policy tomes of our time. Ideas can and should be discussed with respect and awe for our intellectual patrimony, but dour pessimism will never inspire anyone to turn back those forces ever gnawing at the independent mind and the individual soul.

Bill Buckley served this nation with unique distinction, honor and grace for over a half century. He is sorely missed for reasons both personal and public. But any thoughtful person committed to high ideas and the serious purposes to which discourse can be put should confer with him by reading Athwart History or any other of his substantial collections. You can also look for a brief biography by Lee Edwards, William F. Buckley Jr., The Maker of a Movement, and a collection of interviews recently compiled by William Meehan, which confirm the staying power of the causes for which Bill Buckley labored.

Buckley wrote more than 50 years ago in an article that gave this book its title:

“…we offer, besides ourselves, a position that has not grown old under the weight of a gigantic, parisitic bureaucracy, a position untempered by the doctoral dissertations of a generation of Ph.D.s in social architecture, unattenuated by a thousand vulgar promises to a thousand different pressure groups, uncorroded by a cynical contempt for human freedom. And that, ladies and gentlemen, leaves us just about the hottest thing in town.”

Buckley has been gone several years now, and the void is noticeable; for many conservatives, he still remains the hottest thing in town.

- George Shadroui is the author of Crossing Swords: William F. Buckley Jr. and the American Left.
Posted by jtf at 6:39 AM