The Stoning of Soraya M.: An Unflinching Look at the Unconscionable

A courageous film — based on a true story — unveils a brutal Islamic custom still practiced in Iran and elsewhere.

First, a hole is dug in the ground. Then, the accused adulterer is lowered into the empty space and workers bury her up to her waist in dirt. 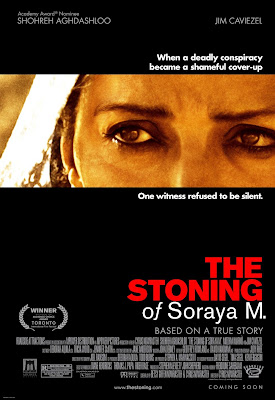 Then, the woman’s neighbors, young and old — as well as her immediate family — start collecting stones to throw at her until she dies.

The Stoning of Soraya M. is unlike any film we’ve seen before. It’s an unflinching glimpse at the very worst side of Iranian culture, an indictment of a barbaric ritual defended and embraced by an entire village.

And it’s based on a real-life incident.

Nowrasteh, best known for writing the ABC miniseries The Path to 9/11, gives away the story in the film’s title. That he keeps the audience engaged up until the final scene is a testament to his measured approach.

In clumsier hands, like Oliver Stone circa 2009, Soraya M. would have played out with thunder, brimstone, and more than a few overt political messages.

Nowrasteh — who also co-wrote the film with his wife, screenwriter Betsy Giffen Nowrasteh — tackles the material in a straightforward fashion. The only razzle dazzle on display is the powerhouse performance by House of Sand and Fog actress Shohreh Aghdashloo as the doomed woman’s confidante.

Aghdashloo plays Zahra, an Iranian woman who corners a journalist (Jim Caviezel) when his car breaks down in her dusty village. She insists he listen to the story she must tell an outsider. Their discussion serves as the film’s perfunctory framing device.

Soraya (Mozhan Marnò) is married to Ali (Navid Negahban), a cruel partner with a wandering eye. Local customs won’t allow him to follow said eye, so he conjures up an adultery charge against Soraya in the hopes the scandal will set him free. The male dominated legal system — aided and abetted by Sharia law, which demands a public execution of the guilty — does the rest.

The townsfolk aren’t the black and white lot one might fear from a film of this nature. Even the man responsible for overseeing the stoning does so from a deeply conflicted place.

The film’s unabashed villain is Ali — the story’s depiction of him is almost totally inhuman. He might as well twist his moustache and cackle toward the heavens with glee as his hateful plot falls into place.

The performances are more or less solid throughout Stoning, with Aghdashloo being a remarkable exception. She’s flat-out terrific as Zoraya’s closest friend and protector, a feminist in the truest sense of the word.

It’s likely the film’s creators will defend the extended stoning sequence — it’s meant to convey the full brutality of the event. But even taking that into account doesn’t justify its length. If audiences don’t grasp the horror of what they’re witnessing during the first ten minutes, then nothing will illuminate them after that.

Just the sight of young children picking up stones for the execution is horrifying enough. 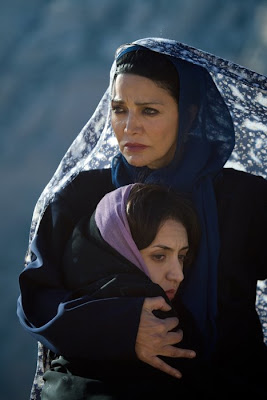 A scene from The Stoning of Soraya M. with Shohreh Aghdashloo

The movie’s final scenes succumb to some unnecessary Hollywood theatrics, but the small, humane touches spread through the rest of the movie more than make up for the excess. Before the stoning begins, the mullah in charge of the process is seen trimming his beard in a gross display of misplaced egotism. Earlier in the movie, the death of a kindly village woman sets in motion a wave of visitors to her home, each eager to pilfer what they can from her belongings.

Film critics are mostly embracing Nowrasteh’s approach to the challenging material. But not everyone thinks it’s wise to remind audiences that such atrocities exist in the Muslim world. Film critic Cole Smithey faulted the director for not blaming the West at some point in the narrative:

But there is something condescending and judgmental in the filmmaker’s subtext that seems to exonerate Western culture as somehow less complicit in the atrocious murders that it commits against innocent and guilty citizens alike.

Nowrasteh remains one of Hollywood’s more reliable envelope pushers, although in a perfect world revealing the atrocities depicted here wouldn’t be such a courageous act.

His Path to 9/11 shook a former president from his slumber. Bill Clinton rallied an entire broadcast network against releasing the film on DVD.
Nowrasteh’s Stoning dares to call into question a barbaric act defended by some Muslims … and doesn’t separate the act from their faith. It takes a village to stone an innocent.

- Christian Toto is a freelance writer and film critic for The Washington Times. His work has appeared in People magazine, MovieMaker Magazine, The Denver Post, The Pittsburgh Tribune-Review, and Scripps Howard News Service. He also contributes movie radio commentary to three stations as well as the nationally syndicated Dennis Miller Show and runs the blog What Would Toto Watch?