In any anthology of memorable farewell speeches, the brief oration by the humble baseball player Lou Gehrig on July 4, 1939, still rates considerable mention. 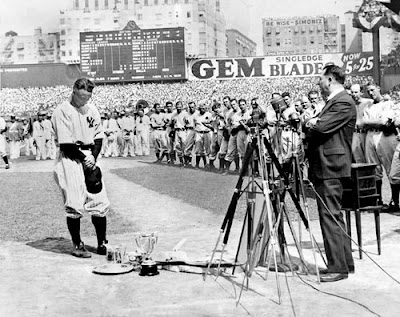 I was at Yankee Stadium on that melancholy afternoon, an 18-year-old sitting in the faraway right-field bleachers, and I was deeply touched by his words. But I thought only that Gehrig’s long career with the Yankees had come to an end. It never crossed my mind that his death was imminent.

How many in that attentive audience of 60,000 suspected that Gehrig’s speech would be forever etched in the game’s history?

“It’s clear to me that a player today who played in 2,130 straight games, as Lou did, might immediately be suspect,” he said. “But that never would have been the case with Lou.”

Major League Baseball will honor the 70th anniversary of Gehrig’s farewell at 15 games on Saturday, when his speech will be read during the seventh-inning stretch.

“It’s an honor to pay tribute to this American legend,” Commissioner Bud Selig said in initiating the leaguewide celebration.

The purpose is to raise awareness and money for research of amyotrophic lateral sclerosis, or A.L.S., the incurable neurological disease that took Gehrig’s life and now commonly bears his name.

Gehrig chose to remain with the team after retiring as a player. As the 1939 summer wore on, he found it increasingly difficult to walk from the dugout to home plate, where, as the Yankees’ captain, he would present the lineup card to the umpire.

After the World Series, in which the Yankees defeated Cincinnati as Gehrig watched from the bench, Mayor Fiorello La Guardia of New York offered him a job with the city’s parole commission. Gehrig’s wife, Eleanor, encouraged him to accept. Gehrig’s salary was $5,700 a year — not bad for the times and about what he had received for his nonplaying role in the Series.

A year later, Gehrig’s body was failing. His mobility was increasingly limited. He could not sign his name, tie his shoelaces or grip cards to play bridge. Reluctantly, he resigned from his parole job.

Gehrig died June 2, 1941, about two years after he received the A.L.S. diagnosis and 17 days short of his 38th birthday. The nation was stunned. Gehrig had been the seemingly indestructible Iron Horse. People from all walks of life, from President Franklin D. Roosevelt to the hot dog vendors at Yankee Stadium, shared their grief. 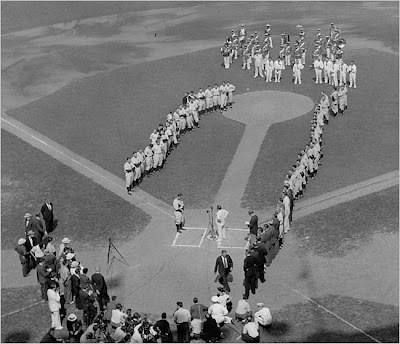 Lou Gehrig, who played in 2,130 consecutive games, made a 277-word farewell speech at Yankee Stadium.

Today, Gehrig’s 277-word speech, immortalized by Gary Cooper in the 1942 movie “The Pride of the Yankees,” continues to have an effect on the American psyche. Gehrig’s words have become more meaningful as time goes on.

They have also had a profound effect on many of those who have A.L.S.

“He taught me that the human spirit can transcend any affliction,” said Chris Pendergast, a former schoolteacher in Miller Place, N.Y., who has battled A.L.S. for more than 16 years. Communicating through his wife, Pendergast said: “I am now a quadriplegic, using a feeding tube and an external ventilator for part of the day. But with Lou as a model, I still feel I have an awful lot to live for.”

Those who face other challenges have also found inspiration in Gehrig’s life. Joshua Prager, a journalist and author, sustained a disabling spinal cord injury in a 1990 bus accident when he was 19. Prager, who wrote “The Echoing Green,” about Bobby Thomson’s 1951 home run at the Polo Grounds, said he admired Gehrig before the accident. In time, his appreciation of Gehrig, who like Prager attended Columbia University, grew deeper.

“In the face of death, he remained defiant,” Prager said. “He hated any maudlin displays, and as he said in his July 4 speech, he still considered himself the luckiest man on the face of the earth.”

The broadcaster and baseball historian Bob Costas has reflected on Gehrig’s legacy as a role model.

“His qualities as a person were always admired,” Costas said. “But that admiration grows when contrasted with the graceless, self-regarding personas of so many present-day public figures.”

Ray Robinson is the author of “Iron Horse: Lou Gehrig in His Time.”
Posted by jtf at 8:42 AM