For Radical Islam, the End Begins 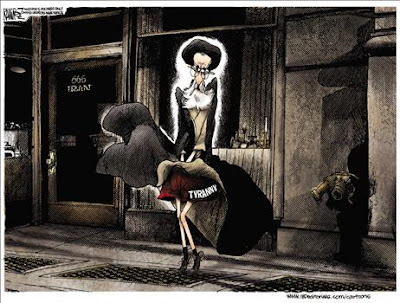 Is history ending yet again?

Much as the hammers that leveled the Berlin Wall in 1989 marked the end of the Cold War, so might the protests rocking Iran signal the death of radical Islam and the challenges it poses to the West.

No, that doesn't mean we'll be removing the metal detectors from our airports anytime soon. Al-Qaeda and its ilk, even diminished in strength, will retain the ability to stage terrorist strikes. But the danger brought home on Sept. 11, 2001, was always greater than the possibility of murderous attacks. It was the threat that a hostile ideology might come to dominate large swaths of the Muslim world.

Not all versions of this ideology -- variously called Islamism or radical Islam -- are violent. But at the core of even the peaceful ones, such as that espoused by Egypt's Muslim Brotherhood, is the idea that the Islamic world has been victimized by the West and must defend itself. Even before the United States invaded Iraq, stoking rage, polls in Muslim countries revealed support for Osama bin Laden and for al-Qaeda's aims, if not its methods. If such thinking were to triumph in major Muslim countries beyond Iran -- say, Pakistan, Egypt and Saudi Arabia -- violent extremists would command vast new stores of personnel, explosives and funds.

This is precisely the nightmare scenario that is now receding. Even if the Iranian regime succeeds in suppressing the protests and imposes the reelection of President Mahmoud Ahmadinejad by force of bullets, mass arrests and hired thugs, it will have forfeited its legitimacy, which has always rested on an element of consent as well as coercion. Most Iranians revered Ayatollah Khomeini, but when his successor, Ayatollah Khamenei, declared the election results settled, hundreds of thousands of Iranians took to the streets, deriding his anointed candidate with chants of "Death to the dictator!"

"Even if they manage to hang on for a month or a couple of years, they've shed the blood of their people," says Egyptian publisher and columnist Hisham Kassem. "It's over."

The downfall or discrediting of the regime in Tehran would deal a body blow to global Islamism which, despite its deep intellectual roots, first achieved real influence politically with the Iranian revolution of 1979. And it would also represent just the most recent -- and most dramatic -- in a string of setbacks for radical Islam. Election outcomes over the past two years have completely undone the momentum that Islamists had achieved with their strong showing at the polls in Egypt in 2005 and Palestine in 2006.

This countertrend began in Morocco in 2007. The Justice and Development Party (PJD), a moderate Islamist group that had registered big gains five years before, was expected to win parliamentary elections. But it carried only 14 percent of the vote, finishing second to a conservative party aligned with the royal palace. And in municipal elections earlier this month, the PJD's vote sank to 7 percent.

Jordanians also went to the polls in 2007 and handed the Islamic Action Front "one of its worst election defeats since Jordan's monarchy restored parliament in 1989," as The Washington Post reported. The party won only six of the 22 seats it contested in the parliamentary vote -- a precipitous drop from the 17 seats it had held in the outgoing legislature.

Forged from diverse ethnic groups linked only by Islam, Pakistan would seem fertile soil for radical Islamism. Nonetheless, Islamist parties had not done well until 2002, when -- with military strongman Pervez Musharraf suppressing mainstream political forces -- Islamists won 11 percent of the popular vote and 63 seats in parliament. But in a vote last year, on a more level field, the Islamists' tally sank to 2 percent and six out of 270 elected seats. Moreover, they were turned out of power in the North West Frontier Province, previously their stronghold.

In April, Indonesian Islamist parties that had emerged four years earlier to capture 39 percent of the vote lost ground in parliamentary elections this time around, falling to below 30 percent. "You can't pray away a bad economy, unemployment, poverty and crime," one voter, a 45-year old shop assistant, told Agence France Press.

Then in May came parliamentary elections in Kuwait, where women had won the right to vote and hold office in 2005 but had never yet won office. Even though the Islamic Salafi Alliance issued a fatwa against voting for female candidates, four captured seats in parliament. Adding insult to injury for the Islamists, their representation fell from 21 seats to 11. "There is a new mindset here in Kuwait," the al-Jazeera network reported, "and it's definitely going to reverberate across the Gulf region."

Finally, Lebanon held a tense election earlier this month that many expected would result in the triumph of Hezbollah and its allies over the pro-Western March 14 coalition. Instead, the latter carried the popular vote and nailed down a commanding majority in parliament.

Of course, each election featured its own dynamics, reflecting local alignments and issues, but they all point in the same direction for radical Islam -- a direction reinforced by recent opinion polls in the Muslim world.
Last year, the Pew Global Attitudes Project found that from 2002 to 2008, the proportion of respondents saying that suicide bombing was sometimes or often justified dropped from 74 percent to 32 percent in Lebanon, from 33 percent to 5 percent in Pakistan, from 43 percent to 25 percent in Jordan and from 26 percent to 11 percent in Indonesia. As a food stand operator in Jakarta put it: "People are less supportive of terrorist attacks because we know what terrorism does, we're afraid of attacks."

Military and social developments in Iraq and Pakistan also seem to be bending to the same wind. Whatever the contribution of the U.S. military "surge" of 2007, the tide of battle shifted in Iraq when broad swaths of the Sunni community that had supported or participated in the resistance to U.S. occupation turned their guns against the insurgent group al-Qaeda in Iraq. And this year, the moderate government in Pakistan finally seems to have turned decisively against the Taliban. Although many critics believed that the central government lacked the will and the ability to subdue the radicals, it has suppressed them in the Swat region and is now carrying the battle into their Waziristan heartland.

What explains this broad reversal for the forces of Islamic extremism?

Clearly, citizens in Pakistan and Iraq were repelled by the brutality of the radicals, as have been many in such other Muslim countries as Jordan, Egypt and Indonesia, which have suffered domestic terrorism attacks. Nor has the Islamists' performance in power in Afghanistan, Sudan and Gaza won any admiration. The Internet and other communications technology is entangling the younger generation of Muslims more thoroughly with their Western counterparts than their elders, making appeals to turn away from the West ring hollow.

Others point to U.S. influence as well. As developments in Iran have unfolded over the past weeks, a minor Washington debate has emerged -- along partisan lines -- over whether President George W. Bush's tough policies blunted the force of the radicals, or whether President Obama's open hand has assuaged anti-American anger and inspired anti-regime forces. Both might be true. Or neither.

Regardless of the underlying causes, a defeated or merely discredited Islamic Republic of Iran could mark the beginning of the end of radical Islam. Until now, Iran has offered the only relatively successful example of Islamist rule, but the bloody events there are strengthening the momentum against radicalism and theocracy in the Muslim world. If the regime hangs on, it will depend increasingly on the militia and other security forces and less on its religious stature.

Of course, the fading of radicalism would not necessarily mean the disappearance of Islamic politics. The Egyptian intellectual Saad Edin Ibrahim noted in the Wall Street Journal last week that Islamist parties are being "cut down to size," and he hopes that they "evolve into Muslim democratic parties akin to the Christian Democrats in Europe."

That would be a result the West could live with.

Joshua Muravchik is a Foreign Policy Institute fellow in the School of Advanced International Studies at Johns Hopkins University and the author of "The Next Founders: Voices of Democracy in the Middle East."
Posted by jtf at 9:04 AM

Email ThisBlogThis!Share to TwitterShare to FacebookShare to Pinterest
Labels: Islam and The West, Middle East