Archaeologists have uncovered a 1,600 year old image of St Paul, the oldest one known of, in a Roman catacomb.

The fresco, which dates back to the 4th Century AD, was discovered during restoration work at the Catacomb of Saint Thekla but was kept secret for ten days.

During that time experts carefully removed centuries of grime from the fresco with a laser, before the news was officially announced through the Vatican's official newspaper L'Osservatore Romano.

There are more than 40 known Catacombs or underground Christian burial places across Rome and because of their religious significance the Vatican's Pontifical Commission of Sacred Archeology has jurisdiction over them.

A photograph of the icon shows the thin face of a bearded man with large eyes, sunken nose and face on a red background surrounded with a yellow circle – the classic image of St Paul.

The image was found in the Catacomb of St Thekla, close to the Basilica of St Paul Outside the Walls in Rome, which is said to be built on the site where he was buried.

St Thekla was a follower of St Paul who lived in Rome and who was put to death under the Emperor Diocletian at the beginning of the 4th Century and who was subsequently made a saint but little else is known of her.

Barbara Mazzei, the director of the work at the Catacomb, said: "We had been working in the Catacomb for some time and it is full of frescoes.

"However the pictures are all covered with limestone which was covering up much of the artwork and so to remove it and clean it up we had to use fine lasers.

"The result was exceptional because from underneath all the dirt and grime we saw for the first time in 1600 years the face of Saint Paul in a very good condition.

"It was easy to see that it was Saint Paul because the style matched the iconography that we know existed at around the 4th Century – that is the thin face and the dark beard.

"It is a sensational discovery and is of tremendous significance. This is then first time that a single image of Saint Paul in such good condition has been found and it is the oldest one known of.

"Traditionally in Christian images of St Paul he is always alongside St Peter but in this icon he was on his own and what is also significant is the fact that St Paul's Basilica is just a few minutes walk away.

"It is my opinion that the fresco we have discovered was based on the fact that St Paul's Basilica was close by, there was a shrine to him there at that site since the 3rd Century.

"This fresco is from the early part of the 4th Century while before the earliest were from the later part and examples have been found in the Catacombs of Domitilla."

Archbishop Gianfranco Ravasi, the Vatican's culture minister, said:"This is a fascinating discovery and is testimony to the early Christian Church of nearly 2000 years ago.

"It has a great theological and spiritual significance as well as being of historic and artistic importance."

The Catacomb of St Thekla is closed to the public but experts said they hoped to be able to put the newly discovered icon of St Paul on display some time later this year. 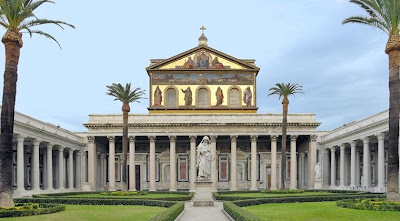 Basilica of St. Paul's Outside the Walls, Rome

St Paul was a Roman Jew, born in Tarsus in modern-day Turkey, who started out persecuting Christians but later became one of the greatest influences in the Church.

He did not know Jesus in life but converted to Christianity after seeing a shining light on the road to Damascus and spent much of his life travelling and preaching.

St Paul wrote 14 letters to Churches which he founded or visited and tell Christians what they should believe and how they should live but do not say much about Jesus' life and teachings.

He was executed for his beliefs around AD 65 and is thought to have been beheaded, rather than crucified, because he was a Roman citizen.

According to Christian tradition, his body was buried in a vineyard by a Roman woman and a shrine grew up there before Emperor Constantine consecrated a basilica in 324 which is now St Paul Outside the Walls.

St Paul's Outside the Walls is located about two miles outside the ancient walls of Rome and is the largest church in the city after St Peter's.

His feast day is on Monday along with St Peter and it is a bank holiday in Rome where they are patron saints of the city.

Officials are considering opening the tomb below St Paul's in the Basilica's crypt which is said to hold his remains.
Posted by jtf at 6:33 AM