In the summer of 1980, I was looking forward to turning 16 and getting a driver’s license. All of my friends were looking forward to driving but none as much as me. My friends would be driving used Mazdas and Toyotas that got good gas mileage. But my dad bought me a 1970 GTO. He didn’t care that it got nine miles to the gallon. It looked like it was going thirty miles an hour when it was just sitting in the driveway. 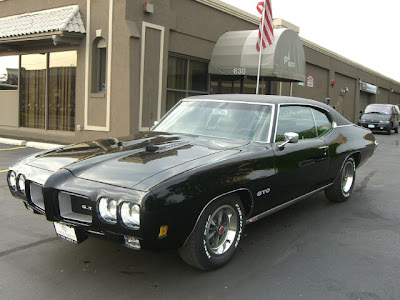 Even though that old GTO was fast it had worn hydraulic lifters that were sucking away horsepower and badly wearing down the stock Pontiac cam shaft. Nonetheless, I put the pedal to the floor and burned rubber every chance I got – that is, as long as the Houston Police were nowhere in sight.

One night on Highway Three I began to hear an unfamiliar sound just after I floored the accelerator. I didn’t realize it at the time but I had merely dented the flywheel cover running over something in the road. But the sound it was making – coupled with the fact that it started just after I hit the accelerator – made me think I had spun a bearing on the crank shaft.

So dad and I went into the garage and pulled out the motor. After it was secure on the engine lift we could see the source of the noise. And we knew we could just pull off the flywheel cover and hammer out the dent to fix the problem. But we also knew it would be so much more fun to rebuild the old motor. My dad must have figured that if I was going to finish at the bottom of my class academically I might as well have the fastest car among the 3300 students at Clear Lake High School.

For weeks, after I got home from school – and my dad got home from work – we toiled away on that engine. First we started with the internal restoration. A Crane Blazer camshaft was the first high-performance extra installed. That went with new rings and bearings, new lifters, and a nice valve job – on 10-to-1 heads with 2.11-inch intake valves.

Then we got to all the really unnecessary aftermarket items. A Holly double pump carburetor sat on a new Edelbrock manifold. Headmond headers ran just below the stock chrome valve covers. We topped it off with a small chrome air filter that allowed people to better see what we had beneath the hood (plus, you could hear it sucking in air from inside the passenger compartment). Finally, there were nice Thrush mufflers to let people know we were coming long before we got there.

When we were done, my friend Jim Duke joked that he hoped his dad would hurry up and have a midlife crisis - so he could build him a hot rod, too. My buddy Terry Cohn said I had the coolest dad in town. Terry has always been wise beyond his years.

That GTO had other benefits, too. The first time I asked Jane out on a date she said she’d go because she heard I had a cool car. When I picked her up she said “This is it?” She was disappointed that it wasn’t much to look at. But after I laid waste to a few Corvettes and Trans Ams she changed her mind.

Those nights in Houston were legendary. Like the time I buried the speedometer at 140 on Interstate 45 on the way to Galveston. Or the time I beat James Armand’s 1970 Camaro in a race up Falcon Pass. That night, I took everyone’s money on the Clear Lake High School soccer team. Those were the days.

But my reign as the king of Falcon Pass would end in less than a year. Billy Peters had a cool dad, too. He bought him a 1967 Camaro with a 427 engine. Billy had all the extras put on that engine, too. And he topped it off with something I didn’t have; namely, a 4.11 posi-traction rear axle.

People always said that car would be the death of me. But, ironically, it saved my life – along with my buddy Wes Armour - in the summer of 1984. A fellow tried to end an argument using a 12-gauge shotgun in the parking lot of Burger King. We left the guy standing, literally, in a cloud of tire smoke. His Jeep wasn’t going to catch up with that GTO.

A few years later, cancer – under the vinyl top, in the trunk, and behind the wheel wells – would claim that old GTO. We would take the Holly and the Edelbrock and bolt it on top of the 400 engine in our mint condition 1973 Grand Am.

But things were never the same. In 1971, Congress would put a halt to the golden era of great muscle cars in America. Emissions requirements would flood the market with low compression, two-barrel, single exhaust versions of the old cars we used to love. They were merely shadows of their former selves.

Now President Obama is determining the compensation of GM employees. He’s getting rid of board members at GM and replacing them with those of his choosing. He’s preparing to impose new fuel economy requirements. He’s even using the IRS to make people buy cars they really don’t want.

Congress started steering the auto industry in the wrong direction many years ago. This new president is merely pushing down the accelerator and keeping steady hold upon the wheel. Meanwhile, our memories of the glory days, like so many youthful dreams, are fading in the rear view mirror.

- Mike Adams is a criminology professor at the University of North Carolina - Wilmington and author of Feminists Say the Darndest Things: A Politically Incorrect Professor Confronts "Womyn" On Campus.
Posted by jtf at 6:14 AM