While some scholars have begun meeting at Oxford to discuss the cause of his eventual sainthood, G. K. Chesterton is remembered largely today by the reading public as the creator of the Father Brown detective stories, in which a humble Catholic priest solves crimes largely because his experiences in the confessional makes him exceptionally informed about the real nature of good and evil.

But beyond Father Brown, Chesterton was an enormously versatile writer of poetry, history, novels, biographies and devotional works as well as literally countless articles (they have never been definitively collected). What is perhaps his greatest imaginative book, The Ballad of the White Horse, is available from Ignatius Press in San Francisco. 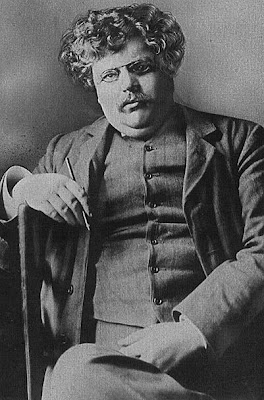 In its style, though not in its ultimate concerns, The Ballad of the White Horse is a rather different work from the adventures of Father Brown. It is not perfect as poetry but it is one of those works -- there are not very many -- that can actually change the reader's life and is a perennial source of inspiration and hope.

Some say Chesterton wrote it in inspired haste over a few days, though the introduction to the present edition says it took ten years. It was published in 1911, and is a vast (173-page), sweeping, heroic account in ballad form of King Alfred the Great's hopeless war, crushing defeat and final "eucastrophic" victory over the Great Army of the marauding Danes in "the Thornland of Ethandune" about a thousand years ago, a victory which saved English-speaking civilization from being murdered in its cradle, and saved us, as Chesterton put it earlier, "from being savages forever." A book-length poem is not the most likely of publishing propositions, but for those in the know about it, The Ballad of the White Horse has enjoyed sales for nearly a hundred years. The present edition is embellished with wood-cut illustrations and notes, though the latter seem hardly necessary: the poem speaks for itself.

It is a poem that can be read by anyone in need of inspiration and encouragement in dark times. It begins with the king, defeated and hiding in the marshes of Athelney. The Christianized kingdom of Wessex (whose symbol was a golden dragon) has been shattered by Viking attacks, both open invasion and the treacherous betrayal of Chippenham:

And the God of the Golden Dragon
Was dumb upon his throne,
And the lord of the golden Dragon
Ran in the woods alone …

Slowly the king, at first wandering alone, recruits a guerrilla army. The first leader he approaches, Eldred, an old battle-scarred Saxon Lord, tells Alfred over his drink they have lost too often and resistance is hopeless:

Come not to me, King Alfred,
Save always for the ale;
Why should me harmless hinds be slain,
Because the chiefs cry once again
As in all fights, that we shall gain,
And in all fights we fail?

Your skalds still thunder and prophesy
That crown that never comes;
Friend, I shall watch the certain things,
Swine, and slow moons like silver rings,
And the ripening of the plums."

Alfred replies that this time he offers no hope or promise of success. However, there is no alternative but to fight. Otherwise nothing will survive:

Then silence sank. And slowly
Arose the sea-land lord.
Like some vast beast for mystery,
He filled the room and porch and sky,
And from a cobwebbed nail on high
Unhooked his heavy sword.

With the same council he gathers a Christianized Roman magnate, Mark, and a Celtic chief, Colan -- as in so many epics, up to The Lord of the Rings and Star Wars, the forces called to resist evil are an ill-assorted lot.

As well as being a military-political story the ballad evokes, as only poetry can, what seems like the authentically strange, haunted atmosphere of that time when, beset by deadly attacks on every side, a new civilization had slowly and partly arisen from the shadow the Dark Ages and the cataclysmic fall of Rome:

And the man was come like a shadow
From the shadow of Druid trees
Where Usk with might murmurings,
Past Caerleon of the fallen kings
Goes out to ghostly seas.

Last of a race in ruins
He spoke the speech of the Gaels;
His kin were in Holy Ireland,
Or up in the crags of Wales …

His harp was carved and cunning
As the Celtic craftsman makes,
Graven all over with twisting shapes,
Like many headless snakes … 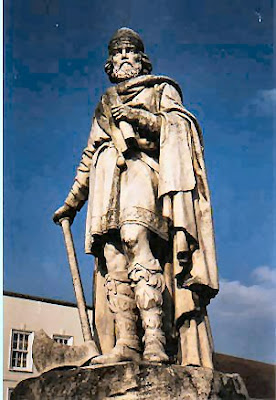 Statue of Alfred the Great at Wantage

Having arranged for the chiefs to meet him as soon as they can gather their forces, Alfred wanders on alone in thought over the "shrill sea-downs", through the ruined landscape towards the meeting-place, playing his harp in the dusk ("The rook croaked homeward heavily, the West was clear and wan …"). He is captured by a party of relatively good-humored, drunken Danes, who, admiring his harp-playing, bring him before their chief, Guthrum of the Northern Sea, the Emperor of the Great Army, and three of his principal Earls. Each, after listening to Alfred's playing, takes the harp and makes a song on it, and Alfred learns that despite their power and terror they are actually despairing and terrified of death.

The young Earl Harald consoles himself with the excitement of battle and plunder. He tells Alfred:

"Doubtless your sires were sword-swingers,
When they waded fresh from foam,
Before they were turned to women
By the God of the nails from Rome;

"But since you bent to the shaven men,
Who neither lust nor smite,
Thunder of Thor! We hunt you,
A hare on the mountain height!"

Elf, the Viking minstrel, consoles himself with music and artistic tragedy:

As he sang of Balder beautiful,
Whom the heavens could not save,
Till the world was like a sea of tears
And every soul a wave …

The dreadful Earl Ogier's consolation in the face of death is destruction ("The barest branch is beautiful, one moment, as it breaks"), but beyond them is Guthrum, who has passed even through that and is staring into a universe of despair too absolute even for Nihilism:

"When a man shall read what is written
So plain in clouds and clods;
When he shall hunger without hope
Even for evil gods …"

The nameless, shabby "rhymester without a home" who is Alfred replies to this Pagan hopelessness:

"Our God hath blessed creation,
Calling it good. I know
The spirit with which you blindly band
Hath blessed destruction with his hand;
Yet by God's death the stars still stand
And the small apples grow …"

Next day the armies meet. Alfred's makeshift Army, having had their courage raised in the night by Alfred's inspired speech, despair at the sight of the overwhelming forces against them, and see the "high folly" of what they are attempting. The Vikings march out in savage magnificence:

The Earls of the Great Army
Lay in a long half-moon,
Ten poles before their palisades,
With wide-winged helms and runic blades,
Red giants of the age of raids,
In the thornland of Ethandune.

Still Alfred's forces attack. Harald, Eldred, Elf, and Mark are all slain, and the Danes, inspired by Ogier, come charging on:

"Down from the dome of the world we come,
Rivers on rivers down!
Under us swirl the sects and hoardes,
And the high dooms we drown …

"It is not Alfred's dwarfish sword
Nor Egbert's pigmy crown,
Shall stay us now that descend in thunder
Rending the realms and the realms thereunder,
Down through the world and down!"

Alfred's forces fight desperately but are swept away:

Vainly the sword of Colan,
And the axe of Alfred plied --
The Danes poured in like a brainless plague,
And knew not when they died.

Prince Colan slew a score of them,
And was stricken to his knee;
King Alfred slew a score and seven,
And was borne back on a tree …

Hopelessly beaten, Alfred points out to the fleeing remnant of his army that all the future has for them is slavery and starvation. It is better to die fighting on the right side. They launch a last hopeless counter-attack and sweep everything before them. Ogier dies under Alfred's axe, the great Viking banner of the Raven of Odin falls, "And the eyes of Guthrum altered, for the first time since dawn."

In the final part, describing the years of peace that follow, the king warns the fight will go on: barbarians will come in the future armed not only with warships and burning torches but also with books, with "the sign of the dying fire," and: "By this sign shall you know them: that they ruin and make dark." 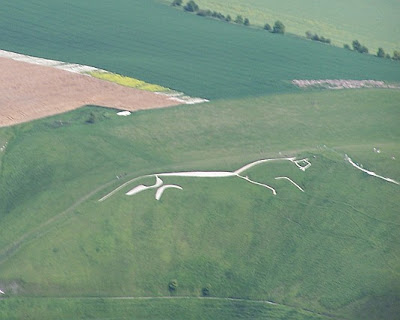 The White Horse of Uffington

C. S. Lewis has said that The Ballad of the White Horse is "permanent and dateless…does not the central theme of the ballad…embody the feeling, and the only possible feeling, with which in any age almost defeated men take up such arms as are left them and win?"

It is good to read The Ballad of the White Horse, and also to reflect that it is basically true. There really was a climatic battle at Ethandune (possibly modern Edington, where a white horse is carved on the chalk hillside, possibly originally in memory of the battle), and where, against all odds, the nascent Anglic civilization and its noble and undaunted king, after years of defeats and betrayals, really won the day, and where the barbarians really were not only defeated but Christianized: Guthrum, with Alfred as his Godfather, took the Baptismal name Athelstan and kept the peace for the rest of his life. In England learning, culture, and civilization were revived under Alfred's rule, and we really were saved from being savages forever. Thank you, G. K. Chesterton.


Hal G.P. Colebatch, a lawyer and author, has lectured in International Law and International Relations at Notre Dame University and Edith Cowan University in Western Australia and worked on the staff of two Australian Federal Ministers.
Posted by jtf at 5:22 AM