The outcome of today's presidential election in Iran may decide whether there'll be a military confrontation with Tehran. 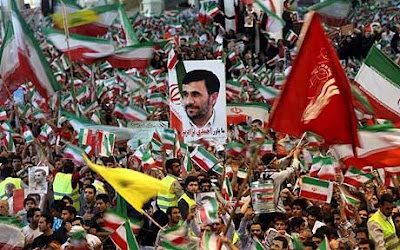 Prime minister during the Iran-Iraq War, Mousavi is viewed as economically sound in a land tormented by inflation and joblessness. By Iranian standards, he's a moderate. And he's stressed the damage done to Iran by President Mahmoud Ahmadinejad's Holocaust denials.

But hard-line clerics, the Revolutionary Guard thugocracy and Shia fundamentalists want more of Ahmadinejad (who's replaced the pistachio as Iran's most famous nut). While the country has grown poorer as a whole, Revolutionary Guard leaders and other insiders have enriched themselves extravagantly.

(The participation of the two other serious candidates is probably a wash: Mahdi Karroubi, a former parliamentarian, will pull votes from Mousavi, while Revolutionary Guard commander Mohsen Rezaei will eat into Ahmadinejad's support.)

Meanwhile, a stunning burst of take-to-the-streets support for Mousavi has alarmed the regime. Referring to the green tokens worn by Mousavi fans, the Revolutionary Guard issued a warning: No "color revolution" will be permitted in Iran.

There are plentiful grounds for worry about unrest leading to violence -- especially if the election results are seen as fixed. Popular demonstrations could meet a brutal response: One lesson the mullahs drew from the shah's fall is that the security forces can't go soft in the clinch.

As for Ahmadinejad, he can't be counted out until the results are announced. He could win either of two ways -- through election-rigging, or by a legitimate ballot victory delivered by his traditional base, the poor and uneducated.

With annual inflation "down" to about 24 percent, at least a fifth of the work-force unemployed and millions more underemployed, Ahmadinejad is counting on loyalty from the "great unwashed" disdained by Iran's educated classes (the Mousavi backers).

The election's key question is: Are the poor still with him? We don't know, because the Iranians don't know.

Ahmadinejad's strategy is similar to that of our own Democratic Party: He drained Iran's entrepreneurial class and lavished oil revenues on vote-buying subsidies for the least productive members of society.

If the party machine herds the Lumpenproletariat to the polls, we may see more of "Ain't-no-gays-in-Tehran" Ahmadinejad. We also may see war, launched either by Israel for self-preservation, or -- despite our reluctance -- by us.

Mousavi, the sort-of-centrist, wouldn't move to dismantle Iran's nuclear program, either -- it's a source of pride to Iranians in general. And elections notwithstanding, the final say in all matters lies with Iran's unelected "Supreme Leader," the Ayatollah Ali Khamenei, a hard-liner's hard-liner.

Constitutionally, Khamenei can fire the president on a whim. So Mousavi, too, would have to toe certain lines. But at least he's not an apocalyptic nutcase.

At a minimum, Mousavi would make a more practical negotiating partner: He'd rationally calculate costs and advantages. He wouldn't sell the farm, but he isn't anxious to irradiate the chickens.

Anyway, the nuclear issue may be our top priority, but it's way down the list of concerns for Iranian voters. Mousavi's supporters expect him to reinvigorate the economy, and urban women hope to gain (or regain) public rights. The candidate's own wife, Zahra Rahnavard, has an academic background and a taste for color. A Mousavi win wouldn't mean bikinis for everybody, but Iran's women just want relief from the misogynist morals police.

An unchallenged Mousavi victory could also open the diplomatic door on non-nuke issues (if Khamenei permits). Sophisticated Iranians remain drawn to American culture (a long hangover from the 1970s), and they're weary of their isolation. The hour's come for a little common sense.

And common sense for an objective Iranian strategist would say that, despite the ugly interlude in our relations, the United States is Iran's natural strategic ally. A renewed relationship remains a distant hope, but stranger things have happened -- who, in 1945, imagined us allied with Germany and Japan?

Personally, I hope to visit Shiraz, Isfahan and Qom one day. Iran's core Persian population is heir to an impressive, authentic civilization (unlike the neighbors).

But if Iranians make the wrong choice -- or if their legitimate choice is denied them -- Tehran may see bombs before it sees new waves of tourists.

This is the most important election anywhere this year. Let's hope that Iranians choose the future, not more of their self-destructive past. Should the majority vote for Mousavi, let's hope the choice is respected.

This isn't just about votes. It's about lives.