Stealth Jihad: How Islam is Infiltrating Your Neighborhood

What if Christians demanded the following:

1. If anyone around Christians at work or school eats pork then they would get fired or severely chastised because we believe that scarfing down pig really offends God (and of course his people). Yep, BLTs—according to our take on Christ’s commands—really ticks him off and therefore bacon should be banned. Not only that, but any food that has even trace amounts of Porky the Pig in it must be verboten and banished from our presence everywhere we go because we’re Christians, and Christians don’t dine on swine. This means Jell-O shots at Tu-Tu-Tango’s and Jell-O served to kids at school ceases to be because Jell-O, hello, contains a wee little bit of a wee little pig, and this pisseth the Lord our God off!

2. All public schools must have several regularly scheduled 15 minute breaks throughout the school day for Christians to roll out their TBN prayer rugs and pray for revival. If not, we will raise Cain and Abel.

3. Public schools must become sex-segregated so that we, the washed, sanctified, filled with the Holy Ghost and fire crowd won’t be sorely tempted to swap spit with the hot Daisy Mae looking chick in pottery class. Matter of fact, why don’t public schools just carve out for us Christians a special school within the school, lest we become sullied via association with the unwashed masses and other religious persuasions, which we utterly detest. Howzabout that, mamasita?

4. Any and all the stupid, violent or sexually weird stuff that misguided Christians have done and are doing is to be scrubbed from the historical record, and the only thing that gets reported and taught is that we are the most peaceful, perfect people to ever schlep this planet. Anyone who thinks or speaks to the contrary will get the stink eye and be called a hater. Indeed, all criticism of Christians should be banned, and those who bring up our foibles, draw unfavorable cartoons of us, and don’t parrot our squeaky-clean spin get branded as bigots or Christophobes and should be threatened with prison.

5. Footbaths are to be installed in whichever universities my brethren and I attend (at the public’s expense) because Jesus was into foot washing, so I want a footbath, dammit! And if this means tuition gets hiked up to provide this for all Christians on campus, well . . . tough. I don’t care. My feet must be ritually washed, or Jesus gets angry—and when he gets angry, people die.

6. Any video games that Sony or whoever puts out that might accidentally offend Christians must be 86’ed. However, if other religions get offended via video it’s okay, just as long as my flavor ain’t disssed, can you dig it?

7. We must receive exemptions from the IRS from paying interest on back taxes because that’s against Christianity.

8. When the Christian church accidentally yields up a violent vocal dillweed from our ranks who hates America and is on the State Department’s terrorist watch list, instead of throwing that loopy bastard in prison we demand that the U.S. Army make him a sergeant. Capice?

9. Encourage the Christian high school student who wants to assassinate our President by giving him the “Most Likely to Become a Martyr” award during graduation.

10. Make students in the public school system who don’t believe in Jesus memorize portions of the Gospel of John, adopt Christian names and shout in the classroom, “I love Jesus, yes I do. I love Jesus. How ‘bout you?!”

Would any of points 1- 10 tick you secularists, atheists and agnostics off?

If Christians ever attempted any of the above they would be righteously ridiculed, castigated and condemned by the MSM, school administrators, cartoonists, talk radio, the blogosphere, Rosie, the coven on the View, religious leaders, the ACLU, Alec Baldwin and president elect Barack Obama. All of the aforementioned people would land on our crotch firmly with both feet. Heck, Christians can’t even say “merry Christmas,” cheer on traditional marriage, or champion the life of an unborn baby without being called Hitler, haters of humanity and intolerant bigots of other people’s values. 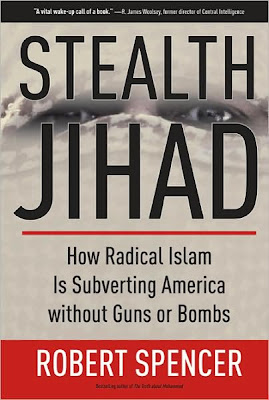 Yep, Islam is making outrageous demands upon American life and culture, and we’re bending over and taking it from them, though we would be insanely intolerant of any other religious group—especially Christians—who had such particular and peculiar demands.

In Stealth Jihad, Islam expert and New York Times bestselling author Robert Spencer blows the whistle on a long-term plot by Islamic Jihadists to undermine the United States. According to Spencer, this effort aims not to bring America to its knees through attacks with guns or bombs, but to subvert the country from within—by gradually Islamizing America. The ultimate goal, the stealth jihadists themselves declare, is nothing less than the adoption of Islamic law in the United States, that’s all!

BTW . . . this is already happening, and Robert shows the reader in blistering detail how American liberties are having to bow and kiss the ring of Islamic rules and regulations. Indeed, the stealth jihadists are already warm and snuggly within the American political, educational and media landscapes.

My advice, boys and girls, is . . . buy Bob’s book, drink a red bull, wake the heck up and fight for your liberties not to be walked on by anyone anywhere.

One last ditty for the skeptics who don’t think “it” could happen here: I’m sure that’s what the Brits thought 20 years ago. Red Bull, anyone?
Posted by jtf at 9:58 AM