FX's gritty police drama has been an arresting experience for its actors as well as its viewers. Its finale is Tuesday. 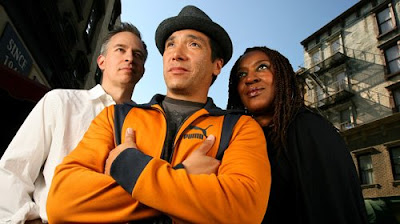 COMRADES: Jay Karnes, left, Benito Martinez and CCH Pounder are mainstays of a show that premiered in 2002, recasting a traditional genre.

Viewers tuning in to the finale of FX's groundbreaking cop drama “The Shield” on Tuesday can count on a few things: There will be no parking difficulties, no plate of onion rings, no Journey song, and no sudden cut to black.

Shawn Ryan, creator of "The Shield," said the end of the drama, which premiered in 2002, will unfold without an ambiguous or mysterious meaning -- the kind that distinguished the series finale of "The Sopranos." The two popular series have often been compared because of their revolutionary approaches to traditional genres.

The final act of "The Shield" is simultaneously explosive and eerily quiet. "I was a fan of 'The Sopranos,' but I had some problems with the way it ended," Ryan said. "I feel 'The Shield' ends on a right and proper note."

"The Shield," which follows a beleaguered Los Angeles police station and its renegade strike team, established FX as a top cable network and proved basic cable could develop quality fare instead of movies and network reruns. Like "The Sopranos," the series is centered on an antihero: Det. Vic Mackey, a dedicated police officer whose unorthodox and brutal methods shadow his crime-fighting.

Though Michael Chiklis, whose portrayal of Mackey scored a first-season Emmy for outstanding lead actor in a drama series, has gotten the lion's share of attention, he has been surrounded by seasoned character actors who have all made their mark on the show's gritty realism. Film actors Forest Whitaker and Glenn Close also dropped in for season-long story arcs.

"The Shield" and "The Sopranos" have both been cited as examples of drama series that took established genres and turned them on their heads. What is the place of "The Shield" in the spectrum of television?

Karnes: What I find compelling is that it's a timeless tale -- you could put it almost anywhere. It's "Macbeth." Here is Vic Mackey, a confident man who decides he's going to break the rules, and not the small rules. He's going to kill somebody, he's going to lie to the people he's close to. And ultimately he and those people pay for that.

Martinez: I remember when " NYPD Blue" came out that first season, and everyone went "Oh my God, those guys are beating up people, they're using abusive language, the camera doesn't keep still." "The Sopranos" did the same thing -- knocked us on our butts. What "The Shield" did was not only take a slice of life, but we got to a genuine natural ending that stands on its own.

You can't compare it to those shows anymore.

Karnes: To compare and contrast "The Shield" with "The Sopranos" is an interesting thing to do. But for me, the way "The Shield" ends is like a long play. Although I love "The Sopranos," I feel like that story is not finished, in a sense. We don't know what happens to Tony Soprano. But Vic Mackey's story, in a way, is completed.

Can you all reflect how you felt at the beginning of the series, where you thought it would go, and how that contrasts with where the show wound up?

Pounder: When I read the pilot, I knew it had something. My thought was, how do you keep up this pace? For seven years, it was amazing to go to work, to think, "I've kind of got the hang of this, and I know how everybody's character is supposed to work," and you never did.

Goggins: Michael, Kenny [former cast member Kenneth Johnson] and I were speculating on the demise of the strike team since the second episode of the first season. The ending that we had thought out, and the one the writers came up with, was so outside the realm of our imagination. And yet it seems that it was fated to go down this way from the first words spoken.

Karnes: We were an ensemble in the sense of knowing each others' moves and being able to be comfortable and add on to that, like a jazz combo. 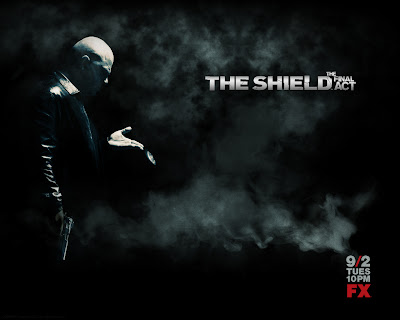 What bonded you all together? You all seem to genuinely like each other.
Karnes: This was a tenuous project to begin with -- a basic-cable cop show for a network that no one had heard of. We all came in with a sense of privilege and entitlement. It was a bunch of scrappy actors putting on a show. We all needed to get along to make this work.

Pounder: We were a league of excellent actors, period. You knew you were parrying and fencing with someone equal or better, which made you better every week.

Martinez: There were things you cannot make up on screen. The biggest thing is chemistry. As soon as Dutch and Claudette started their first speech together, they were a team. The guys on the strike team were laughing between takes, after takes and hanging out afterwards. The bonding worked.

Is it the message of "The Shield" that a strike team needs to go outside the law to accomplish things that bureaucracies can't accomplish? Is this kind of strike team a necessary evil?

Martinez: It asks, "How do you feel if you have to give up some rights to feel safer?" The show never tried to lean a certain way or answer that question for you. There's no heroes, no villains. This is something you take and apply to your own moral values.

Pounder: I completely disagree with that. I think there are plenty of heroes and plenty of villains. This is the way of the world, the fear of democracy of convenience. Mackey is the enemy when you have the time to do the paperwork. But I need this done yesterday, so let's go the other way and let Mackey do it, and I'll turn my back because I've got numbers to prove, I've got higher-ups on my back. And I need Mackey for that. I think people do that all the time -- take the necessary evil because it's easy and convenient. And it's wrong.

Goggins: I agree. If you condone that type of behavior, whether it be law enforcement or a librarian, it's a reflection of your civil society. Everything that Vic and Shane do will come home to roost.

Karnes: That's right. Ultimately it is a cautionary tale.

One of the best aspects of "The Shield" is what Shawn Ryan calls the non-sexual love story between Dutch and Claudette. It goes through the entire run of the show.

Karnes: We just fell into it. CC and I have a very different relationship in real life, but in many ways, it's just as amenable and comfortable.

Pounder: I always see this as one of the great film love stories, where you never see the bedroom. All the intimacies of life are clothed, in a work atmosphere. It is not a salacious or a secret love affair. It is an open marriage that is clear to everyone.

During two of your seasons, you had high-profile stars step into the ensemble. How did the presence of Forest and Glenn alter the dynamic of your established group?

Goggins: When we heard the news about Glenn, we all called each other, saying "Can you believe it?" It wasn't so much the presence but the anticipation of the presence. It was so exciting. Everyone said, "OK, we gotta dig deep."

Martinez: Glenn was brought into our world to play on our court, and she had to come up to our game. As it were, it was part of adding to the team. It didn't diminish or alter the team.

Pounder: Forest has dabbled in film and television, while Glenn had done films for some time. To come up to the speed of working in TV is very intimidating to film people, and then here was Glenn with all this publicity. I really watched a veteran actor say, "OK, this is a lot faster than a moving escalator, and off I go." To watch her throw caution to the wind and get into the spirit of the show, then get into backgammon games with Jay and beat him. . . .

Braxton is a Times staff writer.

greg.braxton@latimes.com
Posted by jtf at 9:21 AM