The Holy Land Verdict: A Setback for the Stealth Jihad 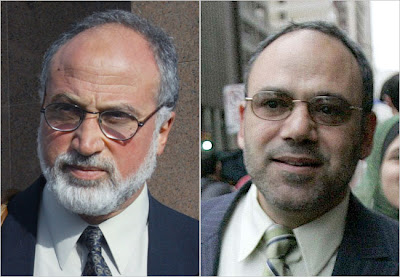 Ghassan Elashi, left, and Shukri Abu-Baker, two of the five leaders of the Holy Land Foundation convicted on Monday.

A federal jury in Dallas on Monday dealt the Stealth Jihad initiative in the United States a crushing defeat: it found five former officials of an Islamic charity, the Holy Land Foundation (HLF), guilty of funneling at least $12 million of the charity’s funds to the jihad terror group Hamas. The notorious “Muslim civil rights” group, the Council on American Islamic Relations, is involved as well, since Ghassan Elashi, a founding director of CAIR as well as founder of the group’s Texas chapter, was among those found guilty; Elashi and his co-defendants face prison sentences of up to twenty years for providing support to terrorists.

HLF was once the largest Islamic charity in the United States. According to the Investigative Project, “prosecutors say HLF was part of a Palestine Committee – a conglomerate of U.S. based Muslim organizations and individuals committed to helping Hamas financially and politically. HLF was its fundraising arm, a designation formalized by Hamas deputy political director Mousa Abu Marzook in 1994.” After September 11, CAIR carried a link to HLF on its website, under the heading, “Donate to the NY/DC Emergency Relief Fund.” It seems likely that some people gave money to this thinking they were helping the injured and bereaved in New York and Washington, when they were actually giving money to Hamas. This weblink earned CAIR the designation of “unindicted co-conspirator” in the HLF case – which designation the group has tried unsuccessfully to have the Justice Department remove.

Andrew McCarthy, who prosecuted the blind Islamic cleric Sheikh Omar Abdel Rahman for his role in the 1993 World Trade Center bombing, told The Investigative Project: “This is one of the most significant victories the Justice Department has won in the war on terror. Financing is the life-blood of jihadist organizations like Hamas. With the assistance of willing co-conspirators, they conceal their activities and use the Muslim obligation of charitable giving to mask support that is actually channeled to their murderous agenda. Today’s verdicts say, loudly and clearly, that Americans aren’t fooled and won’t tolerate it. As a former federal prosecutor, I am especially proud of the assistant U.S. attorneys who persevered through some real travails in securing justice for the American people.”

Another unsavory link between the HLF and the global jihad came to light during the first trial of the charity, which ended in a mistrial last year. Found among the HLF’s documents was the Muslim Brotherhood memorandum about its “grand jihad in eliminating and destroying Western civilization from within” first came to light. It seems clear now that the HLF itself was one of the chief engines of this stealthy effort, enjoying a sterling reputation as a charitable organization while actually acting as a virtual fundraising engine for Hamas.

One chief operating procedure of this stealth jihad effort is constantly to portray oneself as being unjustly victimized by a racist and bigoted Justice Department. (Al-Qaeda manuals, similarly, advise imprisoned members to claim that they have been tortured whenever and wherever they may find themselves in an infidel prison.) The HLF’s allies began with this immediately as the verdicts were announced: a child of one of the defendants, unidentified in news reports, cried out in the courtroom, “My dad is not a criminal! He’s a human!” The tactic of portraying these jihadists as martyrs a la Alger Hiss was furthered also by William Moffitt, an attorney who represented the admitted Palestinian Islamic Jihad operative Sami Al-Arian. “I suspect,” Moffitt opined, “that they will be viewed much the same way that Mandela was viewed by the black South African population – as freedom fighters who have dedicated their lives to the liberation of Palestine.” The HLF trial was, he said, one of many “show trials,” the purpose of which was “to further, in the minds of the public, the so-called ‘war on terrorism.’ There are legitimate terrorist organizations out there. But we’ve tried to make every group that doesn’t agree with us like al-Qaeda.”

Is the problem with Hamas really just that it “doesn’t agree with us”? When Hamas has for years gloried in the murders of innocent Israeli civilians? The answers are clear; but to obfuscate what is straightforward is a hallmark of the Stealth Jihad. That effort – the effort to soften American resistance to Islamic jihad activity and to insinuate Islamic law piece by piece into the United States – has been dealt a blow in the Holy Land Foundation verdict, but although it is down, it is by no means out.

- Robert Spencer is a scholar of Islamic history, theology, and law and the director of Jihad Watch. He is the author of seven books, eight monographs, and hundreds of articles about jihad and Islamic terrorism, including the New York Times Bestsellers The Politically Incorrect Guide to Islam (and the Crusades) and The Truth About Muhammad. His new book, Stealth Jihad: How Radical Islam is Subverting America without Guns or Bombs, has just been released by Regnery Publishing.
Posted by jtf at 7:48 AM