'A Day of Thanksgiving'

The national holiday actually began at a dark hour during our war for independence. Here's the story.

When was the first Thanksgiving? Most of us think of the Pilgrims at Plymouth in 1621. But if the question is about the first national Thanksgiving holiday, the answer is that the tradition began at a lesser-known moment in 1777 in York, Pa.

In July 1776, the American colonists declared independence from Britain. The months that followed were so bleak that there was not much to give thanks for. The Journals of the Continental Congress record no Thanksgiving in that year, only two days of "solemn fasting" and prayer. 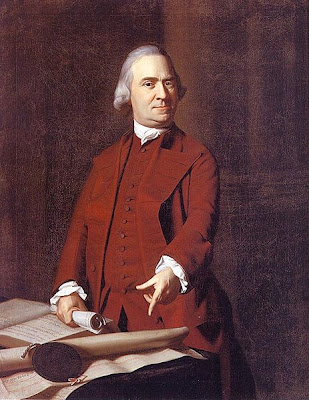 For much of 1777, the situation was not much better. British troops controlled New York City. The Americans lost the strategic stronghold of Fort Ticonderoga, in upstate New York, to the British in July. In Delaware, on Sept. 11, troops led by Gen. George Washington lost the Battle of Brandywine, in which 200 Americans were killed, 500 wounded and 400 captured. In Pennsylvania, early in the morning of Sept. 21, another 300 American soldiers were killed or wounded and 100 captured in a British surprise attack that became known as the Paoli Massacre.

Philadelphia, America's largest city, fell on Sept. 26. Congress, which had been meeting there, fled briefly to Lancaster, Pa., and then to York, a hundred miles west of Philadelphia. One delegate to Congress, John Adams of Massachusetts, wrote in his diary, "The prospect is chilling, on every Side: Gloomy, dark, melancholy, and dispiriting."

His cousin, Samuel Adams, gave the other delegates -- their number had dwindled to a mere 20 from the 56 who had signed the Declaration of Independence -- a talk of encouragement. He predicted, "Good tidings will soon arrive. We shall never be abandoned by Heaven while we act worthy of its aid and protection."

He turned out to have been correct, at least about the good tidings. On Oct. 31, a messenger arrived with news of the American victory at the Battle of Saratoga. The American general, Horatio Gates, had accepted the surrender of 5,800 British soldiers, and with them 27 pieces of artillery and thousands of pieces of small arms and ammunition.

Saratoga turned the tide of the war -- news of the victory was decisive in bringing France into a full alliance with America. Congress responded to the event by appointing a committee of three that included Samuel Adams, Richard Henry Lee of Virginia and Daniel Roberdeau of Pennsylvania, to draft a report and resolution. The report, adopted Nov. 1, declared Thursday, Dec. 18, as "a day of Thanksgiving" to God, so that "with one heart and one voice the good people may express the grateful feelings of their hearts, and consecrate themselves to the service of their divine benefactor."

It was the first of many Thanksgivings ordered up by Samuel Adams. Though the holidays were almost always in November or December, the exact dates varied. (Congress didn't fix Thanksgiving on the fourth Thursday in November until 1941.)

In 1778, a Thanksgiving resolution drafted by Adams was approved by Congress on Nov. 3, setting aside Wednesday, Dec. 30, as a day of public thanksgiving and praise, "It having pleased Almighty God through the Course of the present year, to bestow great and manifold Mercies on the People of these United States."

After the Revolution, Adams, who was eventually elected governor of Massachusetts, maintained the practice of declaring these holidays. In October of 1795, the 73-year-old governor proclaimed Thursday, Nov. 19, as "a day of Public Thanksgiving to God," recommending that prayer be offered that God "would graciously be pleased to put an end to all Tyranny and Usurpation, that the People who are under the Yoke of Oppression, may be made free; and that the Nations who are contending for freedom may still be secured by His Almighty Aid."

A year later, Gov. Adams offered a similar Thanksgiving proclamation, declaring Thursday, Dec. 15, 1796, as "a Day of Public Thanksgiving and Praise to Our Divine Benefactor." He recommended "earnest Supplication to God" that "every Nation and Society of Men may be inspired with the knowledge and feeling of their natural and just rights" and "That Tyranny and Usurpation may everywhere come to an end."

These statements were greeted with cynicism and derision by some of Adams's younger political opponents, who saw them as archaic. One of them, Christopher Gore, wrote a friend that it would be an occasion for a real day of thanksgiving when Adams finally retired.

It turned out, though, that the ideas of thanking God for America's blessings -- and of praying for the spread of freedom everywhere -- would long outlast Adams's career. The concepts still meet with skepticism from time to time. But they are reason enough to pause during tomorrow's football game or family feast and raise a glass to the Founding Father who began our Thanksgiving tradition.

- Mr. Stoll, formerly the managing editor of the New York Sun, is author of "Samuel Adams: A Life," published this month by Free Press.