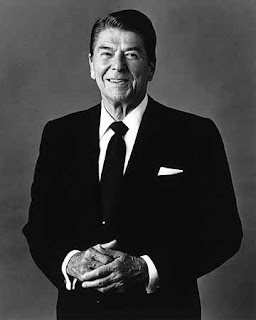 It was on St. Patrick's Day 1988 when an unexpected visitor arrived at Pat Troy's Irish pub in Alexandria, Va -- President Ronald Reagan.
For 27 years, it's been a favorite watering hole for Washington insiders. Some of Reagan's advance men had been regulars. They secretly arranged the president's visit.

Just before noon, the pub was half-packed when Reagan and his entourage arrived. As news got around, the pub quickly filled to capacity. While Reagan enjoyed a pint of Harp and some corned beef and cabbage, Troy was so busy tending to patrons, he didn't have time to react to his famous patron.

"He had an energy about him that put you instantly at ease," Troy told me. "He made it easy to carry on as though he was just another patron, so that is what I did."

Troy took the stage and led the audience in "The Wild Rover." He directed sections of the audience to compete with each other to see which could sing and clap the loudest.

"You have to clap louder, Mr. President," he said to Reagan, prompting the president, not used to being given orders, to laugh.

Troy next led the audience in "The Unicorn Song." While Troy sang the words, the audience mimicked the animals referenced in the song: "There were green alligators and long-necked geese, some humpty backed camels and some chimpanzees. Some cats and rats and elephants, but sure as you're born, the loveliest of all was the unicorn."

Reagan turned to watch a group of young women act out the song. His face showed curiosity and delight – he'd never seen this song performed before. But that was how he was: At the same time he was the world's most powerful man, the man who felled communism and restored American optimism, he was a man of youthful innocence who found immense pleasure in the simplest things.

When Troy finished, he handed the president the microphone.

Reagan spoke off the top of his head. He graciously thanked Troy for having him for lunch. He said it was a great surprise. He talked about his father, an Irishman. "When I was a little boy, my father proudly told me that the Irish built the jails in this country," he said, pausing expertly. "Then they proceeded to fill them."

The crowd laughed heartily. "You have to understand that for a man in my position, I'm a little leery about ethnic jokes," he said. The crowd roared.

"The only ones I can tell are Irish."

He talked about a recent trip to Ireland. He visited Castle Rock, the place where St. Patrick erected the first cross in Ireland.

"A young Irish guide took me to the cemetery and showed me an ancient tombstone there," he said. "The inscription read: 'Remember me as you pass by, for as are you so once was I, and as I am you too will be, so be content to follow me."

As Reagan paused, the crowd eagerly awaited his follow up.

"Then I looked below the inscription, where someone scratched in these words: 'To follow you I am content, I wish I knew which way you went.'"

The crowd roared loud and long, causing the president to deadpan to his advance men: "Why didn't I find this place seven years ago?"

The pub visit was videotaped by Reagan staffers and released to Troy 10 years after Reagan left office.

I watched that video and got to see a snapshot of pure, unscripted Ronald Reagan. It shows how powerfully and eloquently the man was able to engage any audience, large or small, just by being his genuine self.

As we begin the process of selecting our next president, we sure could use another fellow like him. I'll be sure to offer up a toast to the Great Communicator as I celebrate St. Patrick's Day this year: "To follow you we were content, and grateful for the way we went."