Adam Lucas: What It Means 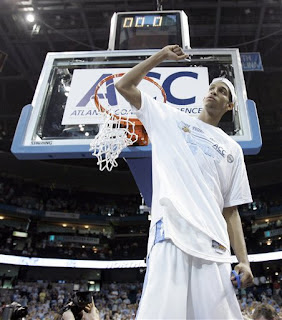 Adam Lucas on the win over NC State.

Sometimes it's hard to tell. Carolina's lone starting senior is the master of the poker face. On the court, you might catch him exulting in a big play, but those moments are rare.

When you think about it, not knowing him is the way you know him. Consider this: have you ever felt less knowledgeable about a four-year Tar Heel who played critical minutes as a junior and senior? What does Terry's mother look like? What are his hobbies? Ever seen his girlfriend?

For four years, he's kept it all inside. He has a lighter side, but even his teammates don't always see it.

"Honestly, he's got that same straight face with us that he has with everyone else," freshman Deon Thompson said. "When he shows a lot of emotion, I'm surprised."

Picture a room. It's the day after Carolina's loss at Georgia Tech and popular opinion has it that the wheels are falling off the Tar Heel bus. Shots aren't falling, players are chirping, and Terry is...hurting?

Several players addressed their teammates on that Friday after practice. They had chosen that time with a specific intent--they knew everyone would be there, no one would be late, everyone would be thinking about basketball. And when it came to Terry's turn to speak, he did something entirely unexpected: 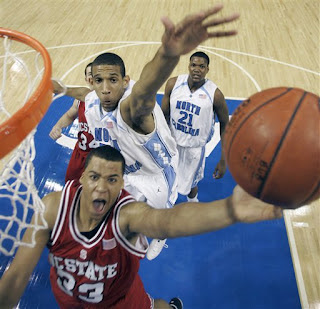 North Carolina State's Brandon Costner (33) goes for the net under pressure from North Carolina's Brandan Wright during the first half of the championship game of the Men's Atlantic Coast Conference basketball tournament in Tampa, Fla., Sunday, March 11, 2007.

The Winston-Salem native was trying to explain what his senior season at Carolina meant to him. First, he tried words. "It's so important to me," he said.

The words made an impression, of course. But his tears meant more. Here was the stoic senior, the man whose previous biggest outburst had probably been one of his typical rapid-fire doses of trash talk during a pickup game, and he was simply overwhelmed.

A lot of things were said that day as Friday afternoon turned into Friday evening. None of them made as big an impact as Terry's emotions.

"I was surprised," Ty Lawson said. "Reyshawn is a tough guy. You never see him show anything. When he started crying, I realized how much it meant to him. He felt like we had so much talent and we were losing it. We weren't using what we had to the best of our abilities."

It's always about ability with Terry, isn't it? You've probably said it yourself.

He's got all the ability in the world...

What I wouldn't give to have that ability...

If he ever harnesses that ability...

His first two years, his teammates saw it more than we did. It would come in flashes--a streak of 3-pointers for the Blue team during practice, a particularly vicious dunk during a summer game. What if those flashes--that ability--could happen during a game that meant something?

Understand this: for all the chirping about Tampa as a bad ACC Tournament site, the St. Pete Times Forum turned into a piece of Tobacco Road in the final minutes of the championship game. For just a moment, you forgot the arena on the water and the palm trees and the hotel breakfast area packed with more spring training fans than basketball fans.

It was Carolina and it was State and it felt like every ACC championship game you've seen before. You were standing and you were chewing your nails and you were starting to wonder what kind of horseshoe Sidney Lowe kept in that red jacket pocket.

By the time the Wolfpack closed to 70-69 on the shoulders of a phenomenal effort from Brandon Costner, there were echoes of the Cardiac Pack throughout the arena. There was 1983 and there was 1987, both a long time ago but both also recent enough to sting.

It is into this moment that Terry suddenly introduced himself. He'd watched an extended stretch of the game from the bench. For what reason?

"He doesn't have to answer that," Roy Williams quickly interjected. "That's between us."

No matter. What mattered was that the relationship between Terry and Williams has progressed to the point that once the senior made an error, he was allowed to go back in the game and redeem himself. That is a good measure of how far he has come. There was a time when one mistake ended his day.

Not Sunday. Williams has been remarkably patient with his senior. It is a relationship perhaps unlike any the head coach has ever had. Sometimes, this is what makes being a coach worth it. You push and you prod and you wait and you coax and then...

Terry with a jumper. Not the best shot in the world, but it is all net. Have you ever noticed that about Terry's shots? When they are true, they never touch the rim, just rip straight through. 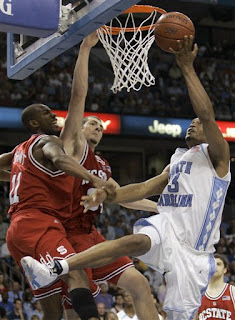 North Carolina's Reyshawn Terry (3) is fouled as he shoots over North Carolina State's Gavin Grant (11) and Ben McCauley (34) during the second half in the championship game of the Men's Atlantic Coast Conference basketball tournament in Tampa, Fla., Sunday, March 11, 2007.

Terry inside. Terry twisting, drawing the foul, and scoring.

Now, he is feeling it. So it is easy to fire a 3-pointer from in front of the Tar Heel bench with Engin Atsur all over him. It swishes. Of course.

"Engin was all over him on that shot," Sidney Lowe said. "All over him."

It was 8 straight points for Terry, a reigniting of the Tar Heels that eventually led to an ACC title.

This is how he exulted in it:

"When I got back in the game, I felt like I had to give the team a spark," he said. "The opportunity came and I was able to take it."

From his words, it was hard to tell exactly what it meant. He met the media at the podium with a hat pulled low over his face, obscuring his expressive eyes. Wes Miller's hat was backwards, giving a perfect view of how much it meant for a player who came to the Tournament just like you and me--as a fan--for so many years.

Terry was expressionless. What did it mean to him? It was hard to tell.

Not for his teammates. They already knew.

Because he had showed them. In words, in actions, and when it mattered the most.

Adam Lucas's third book on Carolina basketball, The Best Game Ever, chronicles the 1957 national championship season and is available now. His previous books include Going Home Again, focusing on Roy Williams's return to Carolina, and Led By Their Dreams, a collaboration with Steve Kirschner and Matt Bowers on the 2005 championship team.
Posted by jtf at 12:23 PM