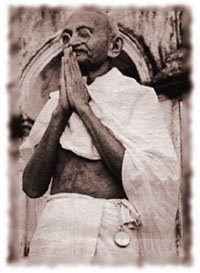 This is based on a transcript of an original radio commentary


I feel bad for Nancy Pelosi, AND her neighbors. Anti-war activists from the group Code Pink have been giving her the same treatment the president gets at his Crawford, Texas, ranch. Camping on her San Francisco lawn, they’re demanding she cut off funds to the troops in Iraq.

Besides coolers and mattresses, protesters have brought along a giant paper mache statue of Mahatma Gandhi, who is pretty much the symbol of the anti-war movement. Code Pink was founded on his birthday, and when Saddam Hussein was being given a last chance to open Iraq to U.N. weapons inspectors, posters appeared around America asking “What would Gandhi do?”

And that’s a pretty good question. At what point is it okay to fight dictators like Saddam or the al Qaeda terrorists who want to take his place?

It turns out that the answer, according to Gandhi, is NEVER. During World War II, Gandhi penned an open letter to the British people, urging them to surrender to the Nazis. Later, when the extent of the holocaust was known, he criticized Jews who had tried to escape or fight for their lives as they did in Warsaw and Treblinka. “The Jews should have offered themselves to the butcher’s knife,” he said. “They should have thrown themselves into the sea from cliffs.” “Collective suicide,” he told his biographer, “would have been heroism.”

The so-called peace movement certainly has the right to make Gandhi’s way their way, but their efforts to make collective suicide American foreign policy just won’t cut it in this country. When American’s think of heroism, we think of the young American soldiers in Iraq and Afghanistan, risking their lives to prevent another Adolph Hitler or Saddam Hussein.

Gandhi probably wouldn't approve, but I can live with that.


— Fred Thompson is an actor and former United States senator from Tennessee.