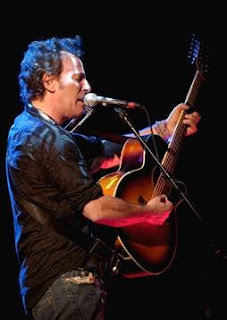 On a night sometimes wistful, often cutting, Bruce Springsteen commanded the Fox Theatre stage Monday as he pared some of his preeminent songs down to their core.

Feeling his way confidently through the opening show of his new two-month tour, Springsteen delivered on an emotionally hair-tingling set, reinterpreting past classics and introducing material from the album "Devils & Dust," in stores today. Alternately standing alone with a guitar and seated at a piano, the 55-year-old artist staged what was in many ways a sequel to his much-acclaimed solo outing a decade ago.

Springsteen took the stage to a standing ovation and familiar cries of "Bruuuce" from the capacity crowd of about 4,600, which watched as he pulled out a harmonica, crouched over and launched into a dark, unearthly rendition of "Reason to Believe" from 1982's "Nebraska." He often worked like a man possessed inside the immaculately lit Fox during the two-hour-plus show, which coupled material from the new album -- which he frequently described as "a record about mothers and sons"-- with chestnuts stretching back 30 years.

Among the latter were incandescent readings of "For You" and "Racing In the Streets" at the piano, which offered Springsteen a fresh canvas for the older work and allowed him to reveal an impressive facility on the keys.

Before a pointed, urgent "Youngstown," Springsteen dedicated the tune to "my good friend Tommy Morello," the guitarist performing next door with Audioslave at the State Theatre. On "Highway Patrolman," he took turns jabbing and strumming at his guitar while rendering the song's narrative with a lonesome but penetrating vocal.

It wasn't just the old stuff that stood up. While the lyrically clumsy "Black Cowboys" fell flat, most of the new material held its own on a night devoted to showcasing Springsteen's songwriting skills. "Long Time Comin'," an older song getting its first public release, sounded like a gorgeous classic, as "Jesus Was An Only Son" and the show-opening "Devils & Dust" were performed with an edgy energy.

"The Rising," title track from Springsteen's 2002 record, showed why it likely has earned a permanent spot in his live repertoire, retaining its anthemic power even when delivered by just a voice and guitar.

Springsteen carried an easy demeanor as he talked the audience through the new album's songs, seemingly relaxed as he embarked on his globe-trotting jaunt. Like the 1995 acoustic tour supporting "The Ghost of Tom Joad," this was a chance for Springsteen to go into character, playing the role of wise, poetic troubador.

While it's a role that certainly pleases Springsteen himself, it's clearly well received by fans too, and for good reason. Monday showed us the side of the artist from which the rest of it all springs: the bare bones of his melodies and words, treated just enough to take on new life and left raw enough to keep their pure parts.