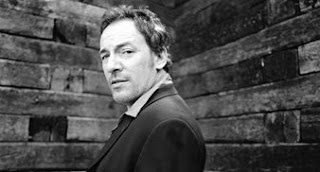 God is hard enough to find in the safe places of this world, but out there in the wilderness, it can become nearly impossible. In the Bible, the wilderness is the place where God's children wander for a generation, where Satan has free reign to tempt even the holiest of men with power and riches. It's not a nice place to visit, and nobody wants to live there.

But the people who inhabit the world of Bruce Springsteen's new album, "Devils & Dust," bear the wounds and scars of a life lived in barren deserts, in forbidding mountain places and in godforsaken no-man's-lands of dangerous borders and nameless towns.

There are only so many things you can do in the wilderness: You can keep moving, you can hope, you can pray or you can die.

Springsteen's characters do all of those things over the course of the album, from the soldier in the title track, with his "finger on the trigger" afraid that his "God-filled soul" will be filled with nothing but "devils and dust," to the battered fighter of "The Hitter," from young Rainey Williams, who steals money from his mother's drug dealing lover and uses it to save his own life, to the drowned migrant of "Matamoras Banks."

Each of the dozen songs on the album tells a small story, delicate in its depiction of moments, even when the details of those moments are raw or brutal. "Reno" is nothing more or less than a first-person account of one man's assignation with a hooker. Shame, regret and memory come together in the way the singer tells us his eyes drift away from the prostitute in the heat of something less than passion and out the hotel window. He closes his eyes and remembers his true love and all he has lost.

And yet, even here, the singer can be struck by some absurd resemblance between Maria, his lost love, and the prostitute ("she had your ankles") and feel "filled with grace."

Grace, of all things: a divine gift that lets us know, despite all evidence to the contrary, that we are loved, forgiven and cared for by God.

It would be nice if we could experience that grace whole and unadulterated, but apart from saints and mystics, that is unlikely for any of us who spend our days in a wilderness of one kind or another. Our experience of grace is, of sin-rooted necessity, incomplete and crippled somehow. Maybe we can imagine a transcendent grace, but we have to experience it in imminent terms.

Springsteen's characters take grace wherever they find it, and where they find it usually is in another person, in the love that often surprises us with its hope and the miracles it works.

"I want to shoulder my load and figure it all out with Leah," the singer says in "Leah." "I want to live in the same house, beneath the same roof, sleep in the same bed, search for the same proof, as Leah." And that halting imminent grace often is preferable to the "signs and wonders" proffered in Scripture.

The singer of "Maria's Bed" knows this to be true: "I was burned by the angels, sold wings of lead/Then I fell into the roses and sweet salvation of Maria's bed . . . Holy man said, "Hold on, brother, there's a light up ahead'/Ain't nothin' like the light that shines on me in Maria's bed/Well I take my blessings at the riverhead/I'm living in the light of Maria's bed."

Sometimes, grace is as cold and hard as a diamond. It's what happens at the end of the line. The protagonist of "The Hitter," an over-the-hill boxer, struggles through the rain to the door of his mother's home: "There's nothin' I want, nothin' that you need say/Just let me lie down for a while/And I'll be on my way."

Mothers and sons roam through these songs as a kind of subtext. Springsteen gives his version of the Pieta in "Jesus Was An Only Son." In this version, it is Jesus who comforts Mary at Gethsemane, Calvary and beyond: "Mother, still your tears. For remember the soul of the universe willed a world and it appeared."

That's a hard lesson to remember in the wilderness, and a halting, half-hearted prayer is sometimes all we have to remind us.

The broken souls in "Devils & Dust" pray hard and often, even if they don't realize it, even if they give voice to those prayers in wishes and vows. The husband and father of "Long Time Comin' " wishes for his two kids that they could break free of family curses and bad choices.

At the end of the song, lying awake next to his pregnant wife, he promises, "I ain't gonna f—- it up this time." That is, of course, the prayer of every repentant sinner since we were all exiled from Eden.

The question is whether grace extends beyond this life, this world, this wilderness. All we can do is hope as the darkness surrounds us.

In the album's final song, that hope is given words in the drowning of a man trying to find his way into America across a border river. "And the things of the earth, they make their claim/That the things of heaven may do the same."

Michael Riley is an ordained Baptist minister.
Posted by jtf at 10:10 AM