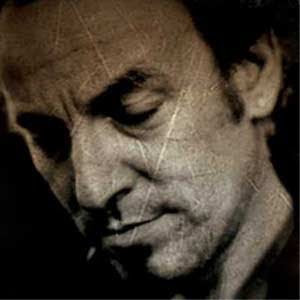 Bruce Springsteen's thirteenth studio album is, in many ways, his most conventional singer-songwriter record since his 1973 debut, Greetings From Asbury Park, N.J. Devils and Dust is twelve songs of assorted vintage and narrative setting, rendered with a subdued, mostly acoustic flair that smells of wood smoke and sparkles in the right places like stars in a clear Plains sky. There is no connected, redemptive urgency to these stories; this is not The Rising. And there is no E Street Band to turn Springsteen's trademark compulsion to save and be saved into fireball baptism: You get Steve Jordan on drums, producer Brendan O'Brien on bass and Springsteen on almost everything else, with his wife, singer Patti Scialfa, and E Street violinist Soozie Tyrell making brush-stroke appearances.

Yet Devils and Dust is, in striking and affecting ways, also Springsteen's most audacious record since the home-demo American Gothic of 1982's Nebraska. It opens with mortal sin -- the title song, a sand-caked letter home from a war where both sides kill in God's name -- and ends in death: "Matamoros Banks," a prayer for remembrance by an illegal immigrant who doesn't make it across the Rio Grande. With its tender fingerpicking, singing-wire curls of dobro and soft, billowing orchestration, "Reno" floats like a night breeze through an open bedroom window. But the sex inside is adulterous and graphic, and it costs: " 'Two hundred dollars straight in/Two-fifty up the ass,' she smiled and said." In the next song, "Long Time Comin'," Springsteen uses the word "----" for the first time on record, in the sense of swearing never to screw up again. There is no apology, though, in "The Hitter": A fallen boxer frankly recalls the brutality of a life in which a man is paid to all but murder other men for entertainment. Springsteen first played the song in his 1995-1997 solo acoustic shows; he sings it here with a vivid, craggy exhaustion. The knockout punch actually comes in the first verse -- the palooka is confessing to his mother. After that, it's all blood, shards of bone and universal guilt: "Understand, in the end, Ma, every man plays the game/ If you know one different, then speak out his name." "The Hitter" is one of several songs on Devils and Dust that Springsteen wrote almost a decade ago, in a concentrated burst of inspiration as he toured behind the spectral-country song cycle, 1995's The Ghost of Tom Joad. He reprises the dust-bowl topography and marooned spirits of that album with moving results. In "Long Time Comin'," a rustic sprint lit with square-dance fiddle and pearly steel guitar, a father prays for his children as the family sleeps rough, under "the sword of Orion": "If I had one wish in this Godforsaken world, kids/It'd be that your mistakes would be your own." But Devils and Dust is also as immediate and troubling as this morning's paper. These people are our neighbors, and these worries are Springsteen's, too. He wrote the title song in 2003, after the start of the Iraq War, and it shows. His cracked, vocal agony when he looks his God in the eye ("I've got my finger on the trigger/And tonight faith just ain't enough") is as old as Stephen Crane and as fresh as Fallujah. "All the Way Home," in contrast, is much older than it seems, predating Springsteen's plunge into party politics last fall with the Vote for Change Tour.
But he steps into the first lines -- "I know what it's like to have failed, baby/With the whole world lookin' on" -- with the grizzled force of experience. The specific echoes of the Rolling Stones' "Street Fighting Man" -- the bees-army buzz of sitar and tamboura coating the rolling twang -- are no accident either.

There are times, like Springsteen's outbreak of whispered falsetto in the campfire rockabilly of "All I'm Thinkin' About," when you can't help waiting for the E Street payoff that never comes. But many of Springsteen's best songs, going back to "Born to Run," are about the salvation just out of reach, around the next curve and over the next hill -- and what it takes to get there. The rewards are often slender here, when they come at all. Still, the promise never fades. "These days I don't stand on pride/ And I ain't afraid to take a fall," Springsteen sings with gravelly swagger in "All the Way Home" -- like a guy already back on his feet.