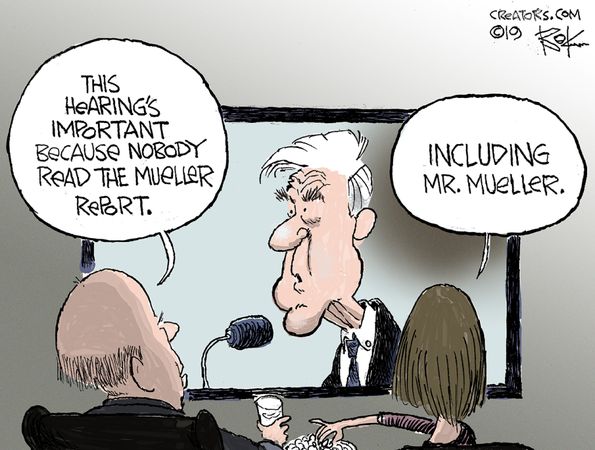 This was a week the President could only have dreamed of. There was the highly promoted appearance of Robert Mueller before two congressional committees in which the impeachment dream of the party with no saleable agenda died in full public view. Egged on by Deep Staters, Guatemala had recently backed off of a deal to keep asylum seekers there, but at the end of the week thought better of reneging (after the President threatened tariffs and other responses if they didn’t follow through on the deal). The week ended with the Supreme Court green lighting the transfer of some funds from the Defense budget to build 100 miles of a wall at the border of Mexico.

Mueller and “His” Report

For two years the mainstream media has been plugging the idea  -- preposterous on its face as it was --that the President colluded with Russia to beat Hillary Clinton. Indeed, the Pulitzer Committee honored the New York Times and Washington Post, leaders of  the collusion band, “for deeply sourced, relentlessly reported coverage in the public interest that dramatically furthered the nation’s understanding of Russian interference in the 2016 presidential election and its connections to the Trump campaign, the President-elect’s transition team and his eventual administration.”


Few people read the Mueller report and the Democrats believed a well-practiced series of soundbites at the hearing would revitalize impeachment impetus. It didn’t. On the contrary, it revealed that the endeavor was corrupt, poorly managed by someone seemingly in the early stages of dementia, and that the special counsel was clearly among those who’d never read the report offered up in his name.
There was a lot of very good coverage of the Mueller testimony. In my view Kimberley Strassel at the Wall Street Journal and Professor Jonathan Turleyat The Hill did the best job of it.
(a) Strassel

We’ve been told it was solely about Russian electoral interference and obstruction of justice. It’s now clear it was equally about protecting the actual miscreants behind the Russia-collusion hoax.
The most notable aspect of the Mueller report was always what it omitted: the origins of this mess. Christopher Steele’s dossier was central to the Federal Bureau of Investigation’s probe, the basis of many of the claims of conspiracy between the Trump campaign and Russia. Yet the Mueller authors studiously wrote around the dossier, mentioning it only in perfunctory terms. The report ignored Mr. Steele’s paymaster, Fusion GPS, and its own ties to Russians. It also ignored Fusion’s paymaster, the Clinton campaign, and the ugly politics behind the dossier hit job. [snip]
As Florida Rep. Matt Gaetz asked Mr. Mueller, how could a special-counsel investigation into “Russia’s interference” have any credibility if it failed to look into whether the Steele dossier was itself disinformation from Moscow? Mr. Steele acknowledges that senior Russian officials were the source of his dossier’s claims of an “extensive conspiracy.” Given that no such conspiracy actually existed, Mr. Gaetz asked: “Did Russians really tell that to Christopher Steele, or did he just make it up and was he lying to the FBI?” [snip] The Mueller team, rather than question the FBI’s actions, went out of its way to build on them. That’s how we ended up with tortured plea agreements for process crimes from figures like former Trump aide George Papadopoulos and former national security adviser Michael Flynn. They were peripheral figures in an overhyped drama, who nonetheless had to be scalped to legitimize the early actions of Mr. Comey & Co. Mr. Mueller inherited the taint, and his own efforts were further tarnished. That accounts for Mr. Mueller’s stonewalling.

The appearances reminded me of scenes in Joseph Heller’s novel Good as Gold(less well-read than Catch 22, but a scathing and realistic take on Washington, D.C. culture). Here are two telling quotes from that work. The first about the FBI:

The second is paraphrased from memory as I’ve misplaced the book. It clearly was intended as a scathing rebuke of Henry Kissinger, whom the author detested, but the notion of undeserved reputation could apply as well to many others, including Mueller: “He lied under oath before Congressional Committees for three administrations and was widely considered an elder statesman.”
Congressman Louis Gohmert has offered up a detailed view of Robert Mueller’s history and it is far less glorious and ethical than the mainstream press and his admirers has led you to believe.
(b) Jonathan Turley

The hearing was a disaster for anyone who was hoping for a kickstart to impeachment. Democrats could not produce even a single takeaway moment in six hours of hearings. Instead, Mueller came across more often as befuddled than bemused by the entire exercise. Calling the hearings a “disaster” for Democrats, Harvard law professor Laurence Tribe, a leading advocate for impeachment, declared, “Far from breathing life into his damning report, the tired Robert Mueller sucked the life out of it.”[snip] Democrats did not seem to care that Mueller was in open contempt of Congress by simply refusing to answer questions whenever it suited him. [snip]
He was allowed to discuss the underlying law as well as key decisions on the preparation of the report. All of these areas had been discussed by Attorney General William Barr and were neither privileged nor classified. So why did he not answer these questions? The answer is as simple as it is obvious. He did not want to because he often had no answer. [snip]
…Mueller answered questions about the Office of Legal Counsel when it suited him and then refused when it did not. He started the second hearing before the House Intelligence Committee by withdrawing part of his earlier testimony before the House Judiciary Committee regarding the two memos. [snip] Given his resistance to testifying and his request to have his chief of staff with him, the hearings successfully magnified the lingering questions over his supervision of the investigation. It all was a testament to how a bad movie can ruin a good book. Film critic Joel Siegel once reviewed “The Bonfire of the Vanities” by saying, “This is a failure of epic proportions. You have got to be a genius to make a movie this bad.” If the Democrats wanted to dampen calls for impeachment, they could not have produced a better cinematic suppressant. Call it “The Day Impeachment Died.”

This is not to say that everyone decided it was time to stop beating this dead horse. Hacks Chris Matthews and Rachel Maddow are still at it.
I suppose with them it’s a new kind of psychological therapy for those dumb enough to watch them -- I’d call it “reverse reality therapy” where the therapist enters into the fantasy with the patients and encourages their continued derangement.
The Wall
Friday in a 5-4 decision the Supreme Court determined that the Sierra Club, ACLU, and the Southern Border Communities Coalition had no cause of action to obtain a review of the determination to use $2.5 billion dollars from Defense Department Funds to build sections of the wall on the Mexican Border. (The administration had authorized other funds  -- military construction, Defense department and the Treasury department’s asset forfeiture accounts [seized narcotics funds] -- to supplement the $1.4 billion Congress had allocated for building a wall on the Mexican border, but  only the Defense Department funds were at issue.)
The case arose from -- where else? -- the Ninth Circuit, where a District Court judge  had issued a nationwide injunction against the use of those funds for wall construction.
U.S. Solicitor General Noel Francisco argued that private groups could not challenge this transfer and the majority of the court agreed. He added that even if they had a valid cause of action their “interests in hiking, bird watching, and fishing in designated drug-smuggling corridors do not outweigh the harm to the public from halting the government’s efforts to construct barriers to stanch the flow of illegal narcotics across the southern border.”
Justice Stephen Breyer wanted to lift the injunction but halt construction until the case was heard on the merits but he was outvoted and construction contracts can now be entered into. “While Friday’s ruling isn’t technically on the merits, it is, in practice, a big win for Trump, since there will be no way to 'unspend' the money once construction begins.”
Boris Johnson, who reminds me so much of President Trump, is now the new United Kingdom Prime Minister and the two men are reportedly already discussing a trade agreement, something that should help Johnson immeasurably in his fight for a no deal Brexit. I can’t say the globalists and deep staters are dead yet, but they are mostly dead and as Miracle Max in Princess Bride says of the dead, we’ll soon be able to go through their clothes and look for loose change.
Posted by jtf at 7:42 AM