New Zealand and Sri Lanka Were Not the Same 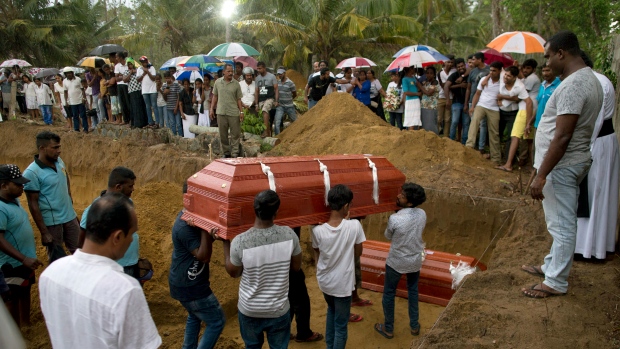 Relatives carry a coffin for burial during the funerals of three members of the same family, all died at Easter Sunday bomb blast at St. Sebastian Church in Negombo, Sri Lanka, Monday, April 22, 2019. (AP Photo/Gemunu Amarasinghe)

The seemingly unlimited supply of virtue-signalers who dominate our culture have assured us emphatically the recent terror attacks in New Zealand and Sri Lanka are equivalent, a kind of quid pro quod between races and religions.

Other than the fact that, tragically, a great many people died in both—more in Sri Lanka, but the numbers are horrific enough in NZ—-this is utter nonsense. They couldn't be more different.

New Zealand was the act of one aberrant or evil (call him either or both) racist individual motivated by rage against immigrants—Muslim "invaders"—he thought were ruining his country. Sri Lanka was a planned attack on multiple targets by a local militant group, likely with the aid of a yet larger group or groups (possibly ISIS) from outside the country, acting under the dicta of a highly-evolved ideology euphemistically referred to as fundamentalist Islam or Islamism.

That ideology—that seeks to take over the world—has hundreds of millions of adherents and sympathizers across the globe, vastly more than Nazism at its height.  Whether active or not, they consider themselves at war with Judaism and Christianity as well as all other religions (Hinduism, Buddhism, etc.) and seek to eradicate these others from the earth.

Victory was recently achieved over ISIS's so-called caliphate, but only in the most limited way was Donald Trump right to celebrate. Although this victory was necessary, it was undoubtedly but a temporary success in a longer war. It is highly unlikely, actually impossible as we have seen most recently in Sri Lanka but also from a staggering 34,986 deadly attacks since 9/11, that the underlying ideology has been extinguished. Only when that is done will such attacks end.

Unfortunately, we seem to be going in the opposite direction. The cult of Islamophobia—and, yes, it is a cult because it is built on a lie—is a major and growing deterrent to a solution. That deliberately false accusation of "unjustified fear" (phobia), promulgated with no consistent evidence that discrimination against Muslims is a serious problem (actually, the reverse) is meant to do one thing only—deflect legitimate criticism of Islam, therefore preventing its reformation.


And Islam has plenty to criticize, not just the obvious misogyny, homophobia, and other aspects of Sharia law, including the primacy of religious law over state law, stonings for adultery, death for apostasy, thieves having their hands removed, etc. It is indeed Medieval. Unlike other religions, Islam has never been significantly reformed—indeed, resists reformation via, among several other things, that bogus accusation of Islamophobia.

Meanwhile, many more will die, the majority of whom will be Muslims, destroyed in their primitive internecine rivalries (see the link above to deadly attacks). Islamic cultures will remain backward and impoverished because the most logical explanation for their condition, in fact, the only one at this point unless you are racist, is Islam itself.

The rest of us in the wealthy and technologically advanced West and East will continue to suffer myriad indignities—restrictions and inconveniences to our travel, visits to concerts and museums, places of business, government buildings, etc.—while looking over our shoulders for the intermittent attacks that will continue for the rest of our and our children's lives. Soon you will have to be fifty to remember what it was like to get on a plane without having to go through security. Maybe it's already so.

Believing this will go away by itself is magical thinking. Isn't it time for a little honesty?

Roger L. Simon — co-founder and CEO emeritus of PJ Media — is a novelist and screenwriter.

Email ThisBlogThis!Share to TwitterShare to FacebookShare to Pinterest
Labels: ISIS, Islam and Terrorism