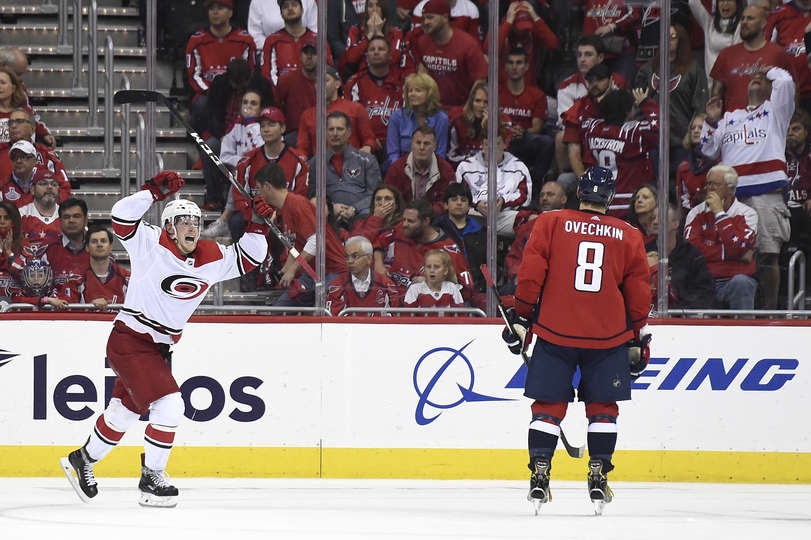 McGinn #23 of the Carolina Hurricanes celebrates after scoring the game winning goal in the second overtime period against the Washington Capitals in Game Seven of the Eastern Conference First Round during the 2019 NHL Stanley Cup Playoffs at Capital One Arena on April 24, 2019 in Washington, DC. The Hurricanes defeated the Capitals 4-3 in the second overtime period to move on to Round Two of the Stanley Cup playoffs. (Photo by Patrick McDermott/NHLI via Getty Images)

If you wanted to show someone unfamiliar with how the Hurricanes ended a 9-year post season drought, just dial up Game 7.
Brock McGinn tapped in a Justin Williams pass 11:05 into the second overtime and the season will continue, starting in Brooklyn on Friday against the New York Islanders. Final score, Hurricanes 4, Capitals 3, in double overtime. For what it’s worth, Carolina has never lost a Game 7 — ever. They’re 5-0, with the last three of those wins coming on the road.
Stop me if you’ve heard this before. The Hurricanes were pretty well awful for the first 30 minutes and trailed 2-0. It could have actually been worse, but for a couple of big saves by Petr Mrazek and a little bit of good fortune. Then Sebastian Aho picked up his own rebound and feathered in a shorthanded goal and the Hurricanes had their legs at the midway point of the second. 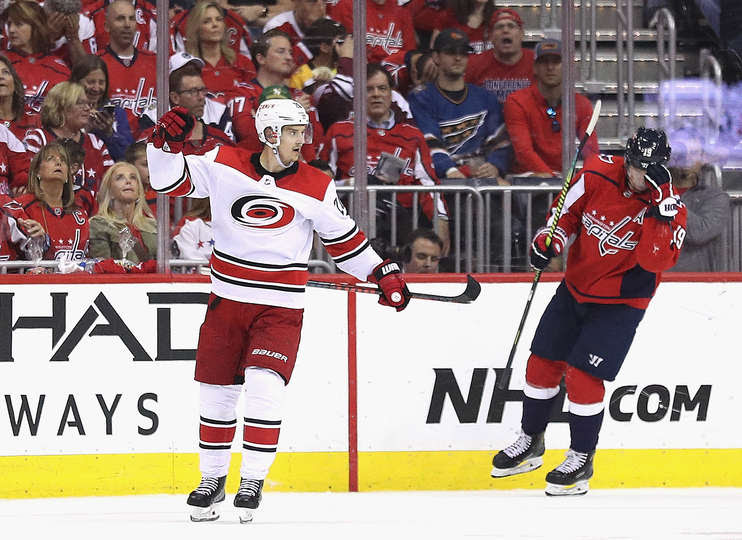 Sebastian Aho #20 of the Carolina Hurricanes celebrates his short-handed goal at 9:51 of the second period against the Carolina Hurricanes in Game Seven of the Eastern Conference First Round during the 2019 NHL Stanley Cup Playoffs at the Capital One Arena on April 24, 2019 in Washington, DC. (Photo by Patrick Smith/Getty Images)

Yeah, that’s right. The Capitals’ power play, which had been smoking along at a nearly 30% clip including five out of 12 on home ice, ended up being outscored in the series clincher. The Caps were 0-for-3 with the man advantage for the night. The Canes didn’t score on their first try but did on the Caps’ second.
Even though the Capitals would respond with a Evgeny Kuznetsov goal to make it 3-1, Carolina had broken the ice and their game was rounding into form. Teuvo Teravainen picked up a loose puck in the slot, wound and whipped it inside the right post for a 3-2 score and the comeback was on.
From that point, just like when the calendar turned to January, Carolina was skating downhill. Jordan Staal tied the game early in the 3rd and the game was played on the Hurricanes’ terms the rest of the way. Not that the Capitals didn’t have their chances, I mean the Canes did have their hiccups in the closing weeks of the season, remember? But, Lucas Wallmark tied up Jakub Vrana’s stick negating an easy goal and McGinn swept away the puck as it was creeping towards the goal line late in the 3rd and helped Carolina extend the game into extra innings.
That’s the story of this season. Rough first half, great turnaround, everyone contributes.
Remember when people tried to tell you that the Canes were better without Jordan Staal? Remember that nonsense? Well, in the season’s final 21 games, Staal piled up 17 points (6g11a) and was a +17. Then in Game 6, it was his goal in the early stages of the 3rd period that put the Hurricanes ahead to stay. 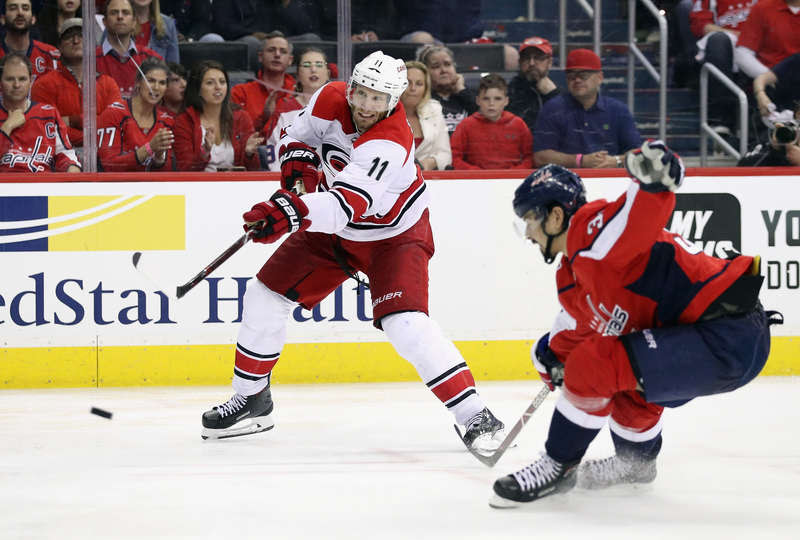 Jordan Staal #11 of the Carolina Hurricanes scores at 2:56 of the third period against the Washington Capitals in Game Seven of the Eastern Conference First Round during the 2019 NHL Stanley Cup Playoffs at the Capital One Arena on April 24, 2019 in Washington, DC. (Photo by Patrick Smith/Getty Images)

Wednesday night in Washington, Staal did it again. Trailing by a goal entering the 3rd, he took a pass from Jaccob Slavin at the blue line skated down the right wing and sniped a wrist shot just inside the far post for a 3-3 game and the rest of the night was played Carolina’s way. Staal finished the first round with three goals and three assists and clearly was the Hurricanes’ best forward.
What do you say about the captian? Justin Williams, who’s now 8-1 with 15 points in his career in Game 7’s, won a face off, lost the puck but chased down Capitals defenseman Matt Niskanen, delivered a hit that caused a turnover and then retreated to the other side of the ice. That’s where Slavin sent the puck and when Williams retrieved it, he threw it at the net where McGinn tapped it through Braden Holtby for the series ending goal.
Yes, the same Brock McGinn who saved the game in the 3rd won it in the 5th.
It was the best game of the series for Teravainen who has quietly built a strong early post season resume for the Hurricanes. Three goals in the series, all huge on the scoreboard and for the psyche. Game 4, right before the end of the 2nd, his goal restored the Canes to the lead they’d never relinquish. Game 6, early second period, Teravainen — again — streaking down the slot where Aho feeds him for a 2-2 game and the Hurricanes were headed for a 5-2 win.
Slavin had three assists On Wednesday night. He had nine in the series. He assisted on the Aho shorthanded goal. It was his pass to Staal that freed him for the tying goal and then Slavin placed the puck in the corner allowing Williams time to retrieve it and finish off the Capitals. 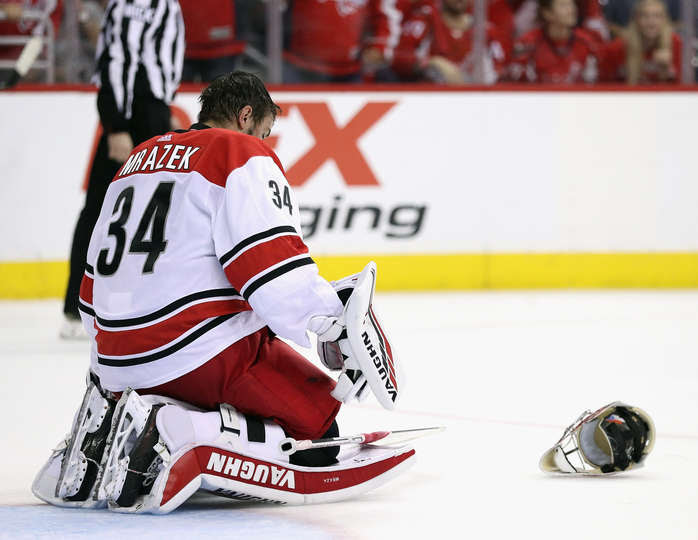 Petr Mrazek #34 of the Carolina Hurricanes pauses after a shot by Alex Ovechkin #8 of the Washington Capitals knocks off his mask during the first overtime in Game Seven of the Eastern Conference First Round during the 2019 NHL Stanley Cup Playoffs at the Capital One Arena on April 24, 2019 in Washington, DC. (Photo by Patrick Smith/Getty Images)

So many plays, so many contributors, and Petr Mrazek just battled his way through it all. He made some wonderful saves, including one that appeared to have drilled him in the mask off the stick of Ovechkin in the 3rd period to keep the game even.
The Carolina Hurricanes of 2019 are building a culture of character and resiliency. They displayed that individually and as a team throughout Game 7 and the entirety of the series against the defending champs. Down 2-0 in games, the Canes won 4 of the next 5, getting incredible contributions up and down the line up.
Just like we saw them do all year long.
I’m beginning to notice a pattern. This, boys and girls, is why there’s no such thing as house money in the NHL playoffs. You stay at the hop until someone taps you on the shoulder.
The Carolina Hurricanes are still dancing. And this season will continue for another couple of weeks, at least.
Posted by jtf at 10:42 AM